We Can't Build You

Even better Chris told me about this picture from the set of the film posted on Bill Pullman's website: 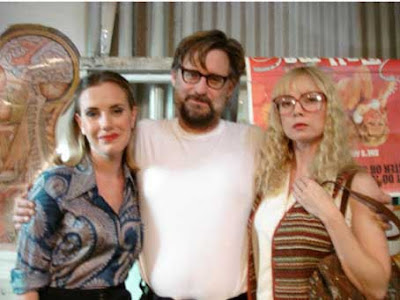 The caption reads: Amanda Decker, Bill Pullman, and Traci Lords on the set of "Your Name Here."

That's an interesting artistic decision to make Pullman kind of look like PKD. Note the psychedelic ephemera in the background.

Anonymous writes this summary on the film's IMDB page:

"Your Name Here" tells the tale of the Sci-fi author William J. Frick (Bill Pullman) during the last few days of his life. Penniless and living in squalor, Bill Frick is on a mission to finish his latest literary masterpiece. His inspiration is the actress Nikki Principal (Taryn Manning): the object of his obsession. After evading a lengthy visit from an IRS agent (Dave Sheridan), Bill has a sudden stroke and wakes up in a limo with none other than Nikki Principal herself, who informs him that his current literary endeavor is going to change the world. He looks out his window and soon realizes that he has become a God amongst mortals, as murals and statues of him permeate the entire city. The vast majority of people worship him, but some like the nefarious Maurice Kroger (M. Emmet Walsh) want Bill's knowledge and power for their own malicious agenda. Over time Bill realizes that he is now living in a world in which he created, he is living one of his novels. "Your Name Here" continues the tradition of "Being John Malkovich", and "Adaptation", and creates an alternative universe that captures the essence of America's most provocative Sci-Fi stories.

Well that doesn't sound too bad does it? Why do I not feel reassured?

Perhaps it's this quote from Bill Pullman in the Olean Times Journal:

Note to Olean Times Journal: There's only 1 L in Philip
Note to Bill Pullman: If I said Pill Bullman is an ass would that reflect anything about you?
Posted by Ragle Gumm at 8:49 PM

Great blog, by the way! I'm really enjoying it so far.

David:
The Dick sort-of biopic sounds distinctly...odd. Do you know who's written and directed it? I don't mind Pullman as an actor but Traci Lords?? Brrr. I confess I still haven't seen "A Scanner Darkly"--looking forward to it though. I put some faith in Richard Linklater's abilities although I do wish he'd given Keanu Reeves a WIDE berth. I shall stop in to your site again soon--I really like what you've done with it and have a feeling Phil, wherever he is, would approve.
Cliff

sounds kinda promising to me - although who's writing/directing is crucial.