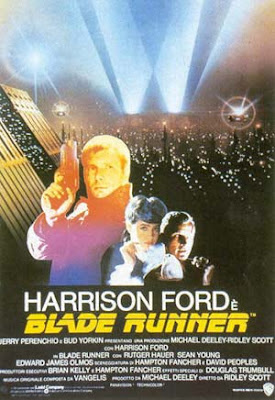 Super cool reader Harvey O'Sullivan directed me to some of the first details about the 'Blade Runner' box set (apparently due out in September of this year - at least in Australia) via DavisDVD.com

Disc 3 - "Dangerous Days: Making Blade Runner" Documentary: * Newly created documentary: Through interviews with the cast and crew, critics and colleagues, this feature-length documentary provides a mainstream-friendly yet meaningful in-depth look at Blade Runner's literary genesis, its challenging production and controversial legacy. When all is said and done, this will be the definitive documentary on the film.

* PRODUCTION - Featurettes and galleries devoted to principal photography and locations.

* RELEASE - Featurettes and galleries devoted to marketing and reaction including Trailers, TV Spots and Promotional Featurettes

* LEGACY - Featurettes and galleries devoted to the film’s resurrection and impact.

* Including the rarely seen Work Print version and potentially the 52 min. Channel Four (UK) documentary which was the first serious documentary created for the film.

Additionally, the set will come packaged in a limited "Blade Runner" briefcase holding the five-disc digipack with foil-enhanced and embossed slipcase. The goodies inside will include a lenticular motion image from the original feature, a collectible model spinner, an origami unicorn, a collection of photographs and a letter from Ridley Scott."

How on Earth could they have possibly known that I wanted an origami unicorn? Unless....
Posted by Ragle Gumm at 8:34 PM

"The Final Cut" summed in one sentence: The theatrical without the voice-overs, but with the violence retained. Also the Unicorn scene has been changed, and some shots are slightly longer - nothing to write home about, if your already have the Theatrical Cut on DVD.