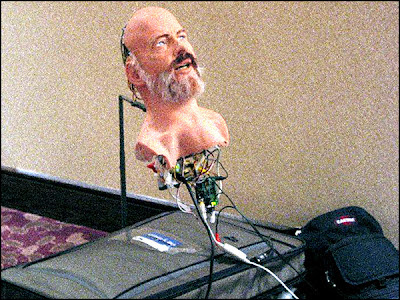 Frank Rose, the author of the recent PKD article/interview with Jonathan Lethem "Philip K Dick Goes Legit With Library of America Canon" in Wired, responded to The Total Dick-Head's coverage of the coverage. Rose writes:

"Despite what it says in the magazine, I did not ask Jonathan Lethem what made Dick's early works so bad. My question was, what made his early novels so bad — in response to Lethem's statement that many of them were. This was changed due to an editing error before the magazine went to press. For a full transcript of the interview the magazine excerpt was taken from, please visit my Web site."

On his website you'll find the rest of the interview with Lethem that wound up on the cutting room floor. It's a good interview that was clearly trimmed far too much. I can empathize. I worked for a short spell at a music news website called SonicNet during the nineties. I lost interest in becoming a journalist when idiotic editors started inserting horrible jokes into stories that had my name in the byline.

Rose then tries to defend Wired's proclamation that Dick's fiction was "expired":

"Finally, the whole Wired-Tired-Expired thing is not meant to be taken too seriously. You can find that particular entry funny or not funny, as you like. But if we weren't fans of Philip K. Dick, we wouldn't be writing about him in the first place."

Yes, I know the whole Wired/Tired thing is a joke that plays on the fickleness of our cultural obsessions, but it makes it look like you're fans of Dick's life and not his work and to imagine the two as separate demonstrates a rather unsophisticated appreciation of his efforts. Plus, it's mean to say that the sum total of an author's career is "expired." Finally, it's clear that the entry was wrong, and if I'm not mistaken one of the main points about Wired/Tired is that it lets your readers know what's hot and what isn't before those trends are obvious to everyone. Clearly in this case you gave most of your readers the sense that the upcoming bio-pics about PKD are more interesting than Dick's fiction. That's pretty lousy advice from some pretty lousy fans.
Posted by Ragle Gumm at 2:21 PM

I mean, I sympathize, but come on -- picking on Wired (which is fun to read, but wrong about nearly everything) and Newsweek (which is always written at a third-grade level) is a little bit beneath you. I think most of us want to hear more about Dick's work and less about the failings of other journalists.

You know Nicholas you're right. But this whole Tired/Wired thing demonstrates a real danger: that Dick's life will subsume his work and PKD will become some old nutjob we can all have a good chuckle about. "What a crazy old coot!" Sorry, but it got to me.

More about Dick's work coming up...

Cool, I'm looking forward to it.

The thing is, I don't necessarily agree that the interest in his life is a bad thing. I think it's a sign that he's made it; we're watching the culture weave a myth around him, just as it inevitably does with most great writers. Think about F. Scott Fitzgerald, and you immediately think of the tragic figure: the doomed alcoholic, his wife in an asylum, selling screenplays to an indifferent Hollywood, etc. You can probably come up with similar caricatures of Hemmingway, Bukowski, or pretty much any other popular writer you'd care to name.

Also, as I'm sure you know, it isn't always appropriate to ignore an author's life when reading their work. You can find the seeds of "The Death of Ivan Ilych" and "Domestic Happiness" in "War and Peace" and "Anna Karenina," but you won't really understand the shift until you read "A Confession." Nor does this rather kooky shift detract from the power of the work. (Anyway, I think Dick is much more of a home-grown Tolstoy than a home-grown Borges -- I read the "The Divine Invasion" with the same bemused interest with which I regard Tolstoy's later stories, whereas Borges' later stories seem exactly like his earlier ones, only more esoteric.)

For whatever reason, it is not enough to be a great writer -- one must also be an interesting person. Personally, I agree with Oscar Wilde, who wrote something about the best poets being the ones who lead the most banal lives, but that just won't fly in the popular imagination. We just have to accept that fact, ignore it when necessary, and move on.