PKD-Related Cover of the Day Part 2 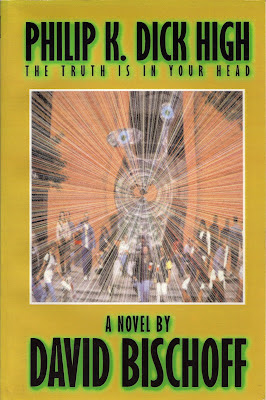 In a comment on last night's post Henri from The Philip K Dick Bookshelf reminded me of David Bischoff's novel, "Philip K. Dick High: The Truth is in Your Head." I actually own this book as a result of my compulsive purchasing of anything on Amazon with 'Philip K Dick' in the title, but I grew tired of it early on after I realized PKD wasn't a character in the book; as far as I know he is never even mentioned explicitly in the novel - but correct me if I'm wrong on that since I never actually finished it.

I don't think we can count Bischoff's title as a Dick-metafiction (speaking of metafiction has anyone read this irritating article from Philosophy Now proclaiming the death of postmodernism? It certainly raised my ire...) since PKD doesn't appear as a character, but then reader Chris told me about this anthology of short stories starring Philip K Dick. It's called 'Welcome to Reality: The Nightmares of Philip K Dick' and after first being blown away by the $595 price tag on a first edition, I finally found a used copy for $35. 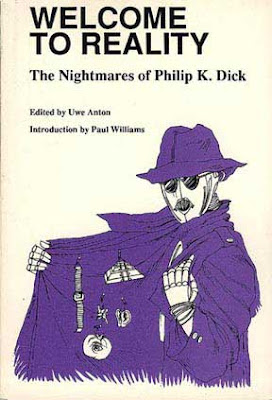 Thanks for the tip Chris!
Pretty soon I'll have a bunch more stories to add to my list.
Posted by Ragle Gumm at 10:08 PM

When can we expect your review of 'Welcome to Reality: The Nightmares of Philip K Dick'? It sounds awesome.

What's so frustrating about that psuedo-post modernism paper?

When can you expect the review? Sometime this summer....
What's wrong with pseudo-postmodernism?
I don't have the time or intelligence to explain the problems as well as one of my heroes Stanley Fish

Basically people have been saying postmodernism was discredited by 9/11, check out what Fish says about that in the article linked above....