Serving Up Even More Chew-Z Sources 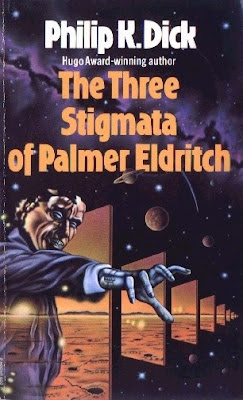 Thanks to some awesome Dick-heads out there I have even more secondary sources to augment our examination of The Three Stigmata of Palmer Eldritch.

PKD-Otaku contributor Patrick Clark turned me on to a page on Philip K Dick Fans.com devoted to Stigmata, which includes lots of PKD quotes about the book. Here are a couple of my favorite:

This is an excerpt from D. Scott Apel's "PHILIP K. DICK: THE DREAM CONNECTION":

"(PKD): Somebody has told me that I had to see that film (LAST YEAR AT MARIENBAD). Anyway... I don't like DO ANDROIDS DREAM OF ELECTRIC SHEEP? at all; I really loathe that book.
(B): Oh good. I have to tell you I detest it.
(PKD:) Yeah, there are certain books of mine I wish I could shovel under, and that's one of them. An interesting one is THE 3 STIGMATA OF PALMER ELDRITCH, as far as I'm concerned. I have read that and have the distinct impression that it was an extraordinary book -- so extraordinary that it may have no peer. It may be a unique book in the history of writing --nothing was ever done like this. And then I've read it over and thought it was completely crazy, just insane; not about insanity, it is insanity. God, it's a weird book.
(B:) If I were to pick a favorite of mine from among your books, that would be it.
(A:) Right, same here. It is certainly in a class by itself. That's the book that should probably be pointed to as your major work.
(PKD:) I think if anything I write is to be retained within the cultural flow that THE 3 STIGMATA OF PALMER ELDRITCH stands a very good chance. Either it will eventually be consigned to oblivion as a bizarre exercise in madness, or it will be considered a breakthrough book. I have a very strong feeling that UBIK, too, contains some important ideas."

Has anybody seen this movie LAST YEAR AT MARIENBAD? I'm wondering why people asked him if he had seen it.

Dick wrote this in his 1968 Self Portrait:

"I enjoyed writing all of them...
But this leaves out the most vital of them all: THE 3 STIGMATA OF PALMER ELDRITCH. I am afraid of that book; it deals with absolute evil, and I wrote it during a great crisis in my religious beliefs. I decided to write a novel dealing with absolute evil as personified in the form of a "human". When the galleys came from Doubleday I couldn't correct them because I could not bear to read the text, and this is still true."

But the page includes more bibliographic information about secondary source material related to Stigmata. What follows is a complete list as of now of all the secondary material we know about:

The Missouri Review, Vol.VII, #2 (University of Missouri-Columbia, 1984} has an essay by Douglas Mackey on "Science Fiction and Gnosticism", which includes discussion of THE 3 STIGMATA

The page also lists some previous threads of inquiry:
The "slot-eyed masks" (Do you think this is what this refers to?) of the knights (in ALEXANDER NEVSKY) is reminiscent of the slot-eyed metal face of Palmer Eldritch in THE 3 STIGMATAIs this slot-eyed image a recurring image in PKD's books? Do you know of any of his books besides VALIS and THE 3 STIGMATA in which this "slot-eyed mask" image occurs? {Letter to PKDS from John K. Berner, Oshkosh, WI}
{Paul Williams replies:}
I don't remember PKD mentioning NEVSKY but maybe someone else does... Our intrepid managing editor {Andy Watson} spent two hours in the library "but could not find any useful photo-frames from Eisenstein's ALEXANDER NEVSKY. Found only one where slot-eyed masks were visible, but they were all blurry and tiny, in the background only... Oh well."

{in reference to the slot-eyed masks see DEUS IRAE; the description of Carelton Lufteufel -- 1997}

It's also possible that a screenplay for Stigmata exists written by Howard Rodman.

What I am quickly realizing is that this volume of material is overwhelming. Are there devoted Dick-heads out there willing to track down some of these materials and summarize them for us? If you think these articles and reviews are essential or even relevant to our discussion you can speak up. If you are interested in contributing in this way simply sign up for the secondary source you plan to track down in the comments section of this post.
Posted by Ragle Gumm at 9:09 PM

I saw Last Year at Marienbad in a film course - it has no real plot to speak of, but essentially deals with identity. Much like Flow My Tears, characters who are great friends in one scene swear they've never met in the next. I can definitely see why his interviewers made the connection.

I don't recall there being any characters in Last Year at Marienbad (1961). In short, the camera pans around a great palace, Marienbad, along with some ambient sounds and music, all in black and white. The perspective (and sensation of viewing it) is not unlike that of a disembodies spirit drifting through its haunt.

My mother, who came of age when this film first came out, claimed it was her favorite, and felt it very important to expose me to it when I turned 13 or 14.

I don't see any similarity between Last Year at Marienbad and Three Stigmata.

I am a library slave and am workjing on those citations.

The Missouri Review and the Survey of Science Fiction Literature I can get soon with a walk across campus.

Having access to university databases and subscriptions yields the one paragraph of this one:
The Washington Post Book World, 3-27-83, has a review of PALMER ELDRITCH on p12.

The Three Stigmata of Palmer Eldritch, by Philip K. Dick (DAW, $2.50). Back in the '60s there flourished briefly what one might call

"acid" sf, the outstanding examples being Brian Aldiss' Barefoot in the Head, Michael Moorcock's chronicles of Jerry Cornelius, and this

novel. In Dick's near future, people on a barren Mars maintain their sanity by chewing the psychedelic Can-D and projecting their

personalities into dolls which live a rich, sensual life impossible for the colonists. Suddenly, the grotesque Palmer Eldritch appears

with a new drug--called Chew-Z--possessing effects that are not only more vivid but more long-lasting, even able to distort permanently

time and history. A disturbing, complex inquiry into personal identity and the fragility of the real.

GRAPHIC: Illustration, from "The Three Stigmato of Palmer Eldritch

It probably has the title write in the print! :)

I thought the 'slots for eyes' thing came from seeing his father wearing his gas mask?

Link to S F Studies article by Gary Wolfe on Warrick with TSPE reference. I don't have the Warrick book, so i couldn't look up the full article. More importantly, i'd like to find information on the Budrys' Who.

snip "........this stuff is really OK, since it has more in common with Camus and Freud than with Budrys and van Vogt. (I mention those names deliberately, because among the many questions I had hoped to find clues for in this book were whether Budrys' Who might have influenced Palmer Eldritch and whether van Vogt's pulp-paranoid universes had helped Dick develop his sense of pacing and setting.)"

Here is the review from Analog listed in the citations above. Surprisingly dismissive rather than insightful!

THE THREE STIGMATA OF PALMER ELDRITCH
By Philip K. Dick - Doubleday & Co., Garden City, N.Y. - 1965 -278 pp. - $4.95
An author can't come up with a "Man In the High Castle" every time, but in this case Philip K. Dick certainly didn't try. This time he's standing in for A.E. van Vogt, or maybe for a Pohl-Van Vogt collaboration. The result is wild, zany, and lively, but not very memorable.
Today's "Barbie" dolls are obviously the inspiration for Perky Pat Layouts, around which the story wheels and whirls. With a little aid from a nicely habit-forming drug, peddled sub rosa by P.P.E. along with the minutely detailed Perky Pat layouts, the bored people of the overcrowded future live it up by imagining themselves into the surrogate worlds they have built up. As with model railroaders and their hobby, there is no limit to the detail with which the miniature sets can be constructed; a goodly chunk of the economy hangs on it, and on the planets, to which segments of the overpopulated Earth are shipped to molder after being "drafted," these installations are all the life worth living.
Then a wheeler-dealer comes back from Alpha Centauri with a more potent drug and layouts of a more perplexingly entrapping type, and the plot starts to get tangled. Is the mysterious Palmer Eldritch the villain of the piece or the hero. In fact, just what is going on from moment to moment? The only way you'll ever find out is by reading the book, and you may be confused then.

I cross posted this on my blog as well.

Would anybody be interested in a copy of Hazel Pierce Starmont reader's guide article on the three stigmata? I'm playing with a new program and could put it on a few paragraphs at a time. It may take a few days but since it's hard to get hold of I would be willing to do it.