Methinks Thou Dost Protest Too Much! 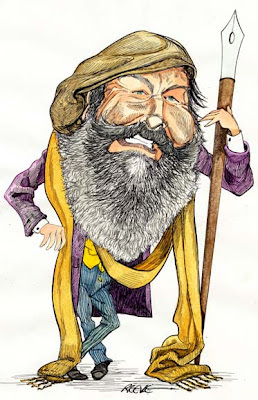 Above: Michael Moorcock, as depicted by a fan (airbrushed unicorn and busty maiden on Chevy van sold separately)

This bad review of The Three Stigmata of Palmer Eldritch written in 2003 by Michael Moorcock (sometimes parents unknowingly bestow incredibly appropriate names upon their children) has ruffled quite a few feathers on the PKD-litserv this morning, and with good reason. Moorcock, whose books I've never read, pans PKD rather mercilessly:

"Dick's work only rarely achieved the stylistic and imaginative coherence of those other writers [Ballard, Burroughs, and Aldiss]."

"His style and characters are indistinguishable from those of a dozen other snappy pulpsters. Even his questioning of the fundamentals of identity and reality is largely unoriginal, preceded by the work of the less prolific but perhaps more profound Charles Harness, who wrote stories such as "Time Trap", "The Paradox Men" and "The Rose" in the 50s."

"The Three Stigmata of Palmer Eldritch ends with a question about identity. Unfortunately, I had to leaf back through the book before I could understand the question because the characters involved were so hard to tell apart. It could be true, as Dick so frequently suggested, that we are all actors playing out the dream of a great director in the sky. In this case, given the illusion of free will, I think I'd rather be in the movie."

Ouch! Coming from a far less successful writer one wonders why we should even take Moorcock's criticism seriously. Moorcock's broad generalizations are not backed up with anything other than righteous indignation (and presumably a little bit of envy). His panning of PKD smacks of holier-than-thou scolding. "Why do you all love this hack so much?! Love ME!!!" Thanks Michael, now I'll never have to read "The Dreamthief's Daughter" to determine if it's as horrible as the title makes it sound.
Posted by Ragle Gumm at 11:52 AM

Personally, methinks THOU dost protest too much. Personally, I like both Philip K Dick and Michael Moorcock and I'm not going to honestly try and make this into a pissing contest into which is the better author. Of course Philip K Dick is the much better known author, his work is everywhere, bookshelves, movies and it's the movies which brought him into vogue after Blade Runner was produced, until then, he was a relative unknown himself. You admit yourself that you've not read any Michael Moorcock books and thus probably dimiss him as just another hack and slash fantasy author, but back in the 60s, Moorcock was one of the leading lights, if not the lead light of the British New Wave SF movement alongside J. G Ballard and Brian Aldiss, as personified with the groundbreaking magazine- NEW WORLDS. He toured and wrote for bands such as Hawkwind and Blue Oyster Cult and managed to not only find critical acclaim as a Speculative Fiction author (through the groundbreaking Jerry Cornelius books) but as an mainstream author in his own right, something that Dick himself would never achieve in his lifetime.

Also, does the fact that another author found 'Palmer Eldritch' and Dick's writing lacking really make him worthy for the unwarranted bashing? People's tastes differ, people like Star Wars, people like Star Trek. Moorcock himself has very positive things on Dick on his website- "Phil and I corresponded a little. I very much admired what he was doing with sf. New Worlds was the first place to publish essays about his work which took him seriously as a modern visionary." and in the UK S.F Masterworks books- "Dick quietly produced serious fiction in a popular form and there can be no greater praise." But Palmer Eldritch is just one book in a huge body of work and maybe this one didn't just appeal. It's his opinion and personally I think he's welcome to it.

Moorcock was indeed one of the precursors of the so called "New Wave" in the 1960. His Jerry Cornelius series is well worth reading. And I would definitely compare this recent piece with his "The Real Ideas of Philip K. Dick," over at www.philipkdickfans.com/frank/moorcock.htm

In my opinion, he's not called 'Moorcock' for nothing.

I had totally forgotten who Michael Moorcock was. In 75' I took a Lit course on Science Fiction and was introduced to Philip K. Dicks, Man in the High Castle, Ursula LeGuinns, Left Hand of Darkness, Stanislaw Lems, Solaris, and Michael Moorcocks, Behold the Man. Of all those books Behold the Man was the only one that I liked and at the time I remember thinking that Philip K. Dick must have been the real life inspiration for Vonneguts Kilgore Trout. I really thought he was unreadable. Now 32 years later Left Hand of Darkness is one of my favorite books, for the last year I have been reading everything Philip K. Dick has written, and I totally forgot Moorcock. What a difference a few decades make.

Miles,
Perhaps you're new to this blog. I hate everyone who doesn't think Phil Dick is the greatest writer ever.

And did Moorcock really just compare Dick to EL Ron Theton in the same sentence?

Moorcock's article sounds to me like his main dissatisfaction with Dick is that Dick didn't attempt to become part of the New Wave. I'll not digress into my time dimmed opionions about this New Wave beyond stating it seemed very over-rated to me at the time,never became what it's name implies and very much New Wave fiction was failed experimentation in my opinion.

miles reid wrote:
"Of course Philip K Dick is the much better known author, his work is everywhere, bookshelves, movies and it's the movies which brought him into vogue after Blade Runner was produced, until then, he was a relative unknown himself." This is mistaken. Dick was well known within the SF genre from nearly the beginning of his career and very soon popular enough that magazines with stories or longer works by Dick disproportionately mentioned them on the magazine cover in the belief this would increase non-subscription sales of these issues.
From the time of his first novel's publication until Dick's death (before Blade Runner's release)I don't think there was ever a time when Dick did not have one or more novels in print; usually several.
One can only speculate about how influential the movies have been in keeping Dick in print and available after his death but it seems obvious to me that his books would not still be published and sold so widely if new readers were not continuing to like what he wrote. And it does not seem likely to me that the content of most of the movies has enough in common with the content of the writings they are (allegedly)based on to be "carrying" the writings. The writings are continuing to sell on their merits.

I personally like Dick's writing better than Moorcock's, but come on! That's a whole lot of ad hominem you're resorting to there. Whether Moorcock has an inferiority complex or not, his ideas on Dick stand on their own, and must be evaluated on their own.

moorcock has been known to scold authors for lack of creativity, politics etc. he wrote an essay about how starship troopers was a sci fi fascist dream. and proceeds to rip some other authors up in the process stating that they are naive, and irresponsible. i personally like moorcocks stuff but i have to state with a slight grin his stuff is politically irresponsible, too romantic and a bit naive imo. i think criticism is necessary but all too often those who are the most critical end up being the ones who are making up for something they think they are lacking.
one of the great things i like about pkd is his stories often relate to us and are so close to reality as to mesh with things that are current or end up happening.
i think ultimately they should both be looked at for the merits in their work rather than some of the stupid things they say or write. i like both pkd and moorcock. i think they both have introduced great ideas of paradox altered and alternate realities.

I'm very late coming to the party here, but I'd like to point out that Stanislaw Lem wrote several lengthy and scholarly articles about the need for literary criticism in SF in order to turn it from a genre to an art form, and pretty much PKD is the only American writer he mentions in a positive fashion. In his essay "Science Fiction: A Hopeless Case, with exceptions" Phil is pretty much the sole exception he cites.

Check it out in "Microworlds" by Stanislaw Lem.