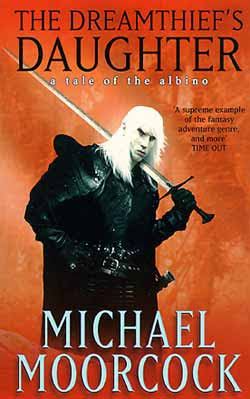 Seeing how's there's been a bit of a dust-up of late, following my vitriolic vivisection of Moorcock's 2003 review of The Three Stigmata of Palmer Eldritch, I thought I'd dig a little deeper. Moorcock wrote another review of The Three Stigmata of Palmer Eldritch almost forty years before his most recent one, a much longer and deeper examination of the book. While it sheds a lot of additional light on Moorcock's opinion of Dick, I'm not sure I like him yet (but I admit I'm totally prejudiced).

My main problem with Moorcock is that he makes blanket statements and then doesn't bother to support them. Let's look at a couple from his 1966 article "The Real Ideas of Philip K Dick" which appeared in Vector Magazine:

"Even a non-intellectual writer like Dickens could return to a theme (the persecution of the innocent, for instance) time and time again and escape criticism of repetition because he was able to give reality to his situations and vary the circumstances of his characters sufficiently to give the theme fresh power and insight."

There are so many amazing themes in Great Expectations I don't even know where to begin to debunk this statement. Moorcock is posturing as if each Dickens novel contains only a single theme. There are more great themes in Great Expectations alone than I can count on all my fingers and toes. If you don't believe me read it yourself. What on earth does Moorcock mean 'non-intellectual writer'?

"Where a science fiction writer refuses to give in to the narrow demands of the field, he tends to come under attack. J.G. Ballard, for instance, is subjected to a great deal of intolerant and unintelligent criticism of his ‘repetitiveness’ of theme and background – and characters, for that matter – primarily by people who demand sensation alone from literature and are either incapable of understanding the essential themes of his work or too impatient to bother to look for them. "

Who attacks authors like Ballard? When and under what circumstance? Idiots! Idiots with too much time on their hands! That's who! Don't blame the lowest common denominator for the state of science fiction.

"Like Ballard, Dick works without pretension. He is not out to impress; there is no virtuoso display in Dick’s work, none of the literary posturing which so mars the work of Vonnegut, who manages to state the obvious so brilliantly that one is very often fazed by it for a while. What is so admirable and agreeable about books like THE MAN IN THE HIGH CASTLE, THE GAME-PLAYERS OF TITAN or DR. BLOODMONEY is the solid, skillful craftsmanship with which they are written. His characterization is never brilliant, he does not create great, bizarre characters that live in the mind long after the books are finished (Bunny Jingadangelow in GREYBEARD, Strangman in THE DROWNED WORLD or Gully Foyle in THE STARS MY DESTINATION), but his characters are exceptionally easy to identify with and they are convincing. They are almost always ‘ordinary’ people, even if they possess psi-powers as many of them do, and while their personalities do not impress us, they are exactly the right kind of characters needed to convince us of the ‘reality’ of their existence. Their problems are ordinary problems to do with sex, money and prestige and it is these problems that tend to lead them into the bigger issues involving the fate of many."

Uh isn't that an example of incredibly good characterization? One might even call it 'brilliant.' Dick's characters live on in my mind; chances are they probably live on in yours too, or else you wouldn't be reading this.

"Palmer Eldritch himself is one of Dick’s few bizarre characters."

WHAT?! Even in 1966, this is a myopic statement. Ragle Gumm in Time Out of Joint? Bill Laws in Eye in the Sky? Manfred Steiner in Martian Time-Slip? How does Moorcock define "bizarre"? What exactly is lacking in these characters?

"Dick’s work is not profound in comparison with established philosophical literature like Goethe’s FAUST and so on, neither does it have the sense of depth found in contemporaries like Borges. It lacks the intensity of vision and powerful symbolism of Ballard and the elegance and ability to create mood of Aldiss."

These sentences sound like someone preparing to tell their friend the girl they set him up with has a great personality.

"What [PKD's writing] does have is a seriousness of purpose, an unfaltering intention to get at the truth as Dick sees it, the power to create everyday environments which gradually shift in perspective until every aspect of the particular environment is held in question; the same is done with character – a man may begin by feeling that he knows himself, but gradually Dick will whittle away at that belief, leaving the man totally unsure even that he exists. Dick uses all the skill of an excellent science fiction craftsman to produce books which are more than just craftsmanly pieces of escapism. He is not toying with half-baked, half-understood notions like so many contemporaries who have managed to impress so many readers with their oversimplified social and ‘philosophical’ gimmickry and who are so dull, so far away from making any sort of true observation about anything that one is bewildered by their lack of even the simplest insights."

So how exactly does PKD do this then? If it isn't brilliant characterization, or originality, what is it? It seems like everything Moorcock loves about PKD and specifically The Three Stigmata of Palmer Eldritch in the 1966 review is what he hated in 2003 one.

In his 2003 review Moorcock contends that the end of the book confused him:

"The Three Stigmata of Palmer Eldritch ends with a question about identity. Unfortunately, I had to leaf back through the book before I could understand the question because the characters involved were so hard to tell apart."

(As you know, I'm in the middle of blogging the book and the characters are NOT hard to tell apart!)

"It may sound easy to write a book like [3 Stig], once the initial idea has been worked out, but it says a great deal for Dick’s craftsmanship that the story, even at its most confusing, never loses its pace and never loses its ability to keep disbelief suspended until the last possible moment. The reader expects some kind of ingenious denouement – as in a van Vogt novel, for instance – but it never comes. The only explanation is implicit in the novel itself."

So what are the 'real' ideas of Philip K Dick, as promised in the title of the 1966 article?

I tried in my vivisection of Moorcock's 2003 review to demonstrate his shortcomings. I chalked his dismissal of Dick's work up to his bitterness at not being as big a star - without evidence. Exactly the same way Moorcock dismisses Dick's characterization as less than brilliant, his later novels being "incoherent" and "scarcely readable," and finally (and most disgustingly) comparing Dick's search for meaning to L Ron Hubbard's "rough and ready belief system resembling Buddhism or Manichaeism."

Michael Moorcock is also one of my favorite authors so after your last post I've been thinking about this. I think Moorcocks problem is perhaps resentment but not of PKDs success in selling books.

Moorcocks formative childhood experience was the blitzkrieg of World War 2. It demolished his beloved London but also led to an astonishing camaradarie between people of all social classes. After the war, Britain lost what remained of its empire. Like Moorcock, most Englishmen were indifferent to religion. As evidence of the atrocities of Communism came out, that was no longer an option either. But in that brief example of wartime unity, Moorcocks generation could find hope for creating a new humanistic society without the tragic flaws of the old. This is why the new wave SF writers were all about forging a new style and capital-I ideas.

The USA mostly escaped the trauma of World War 2. PKD grew up at the height of American, and particularly Californian, ascendancy. While people elsewhere were speculating about the future, California was creating it. Even despite the Cold War, Vietnam and Nixon, Americans have never had the same degree of self-doubt or the sense that history is going off the rails as Europeans have. In California there to be sure political protests against the status quo but for every civically engaged liberal of the type Moorcock would approve of, there were 10 who rebelled by joining a weird religion, playing in a rock and roll band or just taking large quantities of drugs.

Despite surface appearances most Europeans aren't anti-American but it puzzles them no end that this big lumbering beast of a country that gallumphs through world events seemingly without irony or awareness should nevertheless be the leader and trendsetter of the world. I was born in England and even though I have now lived a greater part of my life in the US I still marvel at this sometimes. (Incidently, Moorcock lives in Texas part time)

In my opinion it is the American self-indulgence of PKD which irks Moorcock (or that French guy from a couple of weeks ago.) His characters know something is wrong with existence. They cope with it. They retreat into the fantasy worlds of drugs or Perky Pat layouts. But they don't step up and become the Eternal Champion who will actually fix the problem. Things are just left dangling and this, a neat and tidy European can't abide.

Moorcock infamously compared The Lord of the Rings to Winnie the Pooh...

I read a bucket of books by Moorcock in my youth. Most of it is cliche- ridden hack work. The Jerry Cornelius stuff is unreadable: new wave must mean let's abandon conventions like story and character; and what science fiction has Moorcock written (I won't count Behold the Man despite the time travel)? Elric is a perverse parody of sword swinging heroes (a step above his other stuff). Corum was the most enjoyable of the lot - a balanced blending of sci-fi elements in an essentially fantasy world.
~Fred

FWIW I had an online rant about his review of the Carrere book a couple of years ago. It's a bit pedantic but I think it still gets the point across.