We're Only Made Out of Dust 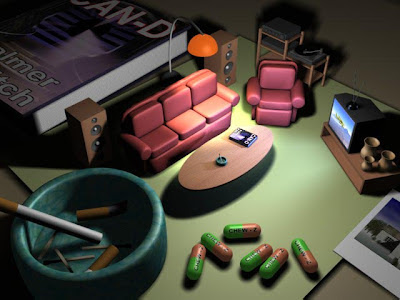 Blogging The Three Stigmata of Palmer Eldritch - Part One

"I mean, after all, you have to consider we're only made of dust. That's admittedly not much to go on and we shouldn't forget that. But even considering, I mean it's a sort of bad beginning , we're not doing too bad. So I personally have faith that even in this lousy situation we're faced with we can make it. You get me?
From an interoffice audio-memo circulated to Pre-Fash level consultants at Perky Pat Layouts, Inc., dictated by Leo Bulero immediately on his return from Mars.

That squib begins The Three Stigmata of Palmer Eldritch. According to Dick this short message at the beginning of the novel provides closure for any careful reader. I'll dig into that when we finish the book. There's plenty to look at here for now.

Of course "dust" is a loaded word in literature.

"Ashes to ashes dust to dust" is commonly thought to be a Biblical reference but the phrase, which first appeared in the 17 th century English Burial Service, was significantly altered from Genesis 3:19 in the King James Version of the Bible:

"In the sweat of thy face shalt thou eat bread, till thou return unto the ground; for out of it wast thou taken: for dust thou art, and unto dust shalt thou return."

Remember also that after God catches Adam and Eve eating the forbidden fruit he sentences Satan saying, "upon thy belly shalt thou go, and dust shalt thou eat all the days of thy days" (Gen 3:14)

In many works "dust" serves as a symbol of mortality and the insignificance of individual life. Perhaps most famously in T.S. Eliot's line "I'll show fear in a handful of dust" (line 30) from his 1922 poem "The Waste Land" (this line eventually became the advertising slogan for Neil Gaiman's Sandman). This line is also a reference to the Sybil who is mentioned in the poem's epigram, and who was granted "as many years of life as sands that were in her hand."

Of course F Scott Fitzgerald wrote about a land of ash in The Great Gatsby:

The word "dust" is almost like kipple in Do Androids Dream of Electric Sheep?, cropping up over and over again as Earth has been covered by radioactive dust following World War Terminus. Deckard wears a lead codpiece to avoid becoming sterile or otherwise retarding his ability to produce viable offspring. But I think this is a different kind of dust.

This isn't the dust we turn into when we die, this is the dust we're made out of. And of course this is a book all about what things are made of: Eldritch is made up at least in part (after his return from Proxima) of metal, reality is in many cases made up of either Can-D or Chew-Z, (those are the only two examples I can come up with off the top of my head - don't worry, I'll find more as we get into the book).

I might ask my class (remember I'll be teaching this novel for the first time in a second year literature course at San Francisco State University), "So what is Leo Bulero trying to say here?"

Why does he say that being made of dust is "sort of a bad beginning"?

Leo seems to be saying even though there's nothing special about us - we weren't created by a God (or whatever since this would not be "a bad beginning") - that there's still something special about us, something atypical about the place we occupy in the cosmos and the capacity we possess to care about others in an uncaring universe. This is the ultimate in humanist rhetoric.

But perhaps I am projecting my own agnosticism onto Bulero. Perhaps Leo is commenting on the ass-backwardness of the universe, the insanity (or incompetence) of the demi-urge which created all of us, saying in effect, "it may seem like God doesn't know what he's doing but let's have a bit of faith." In this regard, Bulero's memo reminds me of Martin Luther King's famous remark made during his last Sunday morning sermon, Remaining Awake Through a Great Revolution, delivered at the Washington National Cathedral on Palm Sunday, March 31, 1968:

"The arc of a moral universe is long, but it bends toward justice."

Perhaps Leo is stating categorically in the memo that he is not a God, not the guiding force for good in the Universe, but merely a man, made out of dust, like the rest of us mere mortals.

Our own palmer_eldritch over at Frolix_8 began parodying Bulero's interoffice memo but these quickly evolved into hilarious send-ups of office discussions like this one that just about bust my gut:

The Minority Report - Is It My Profile?

"Head of Personnel - [crashing both fists into laptop keyboard in frustration as Eldritch enters room] Oh this bloody thing!

Palmer Eldritch - [entering with a due sense of apprehension and dread] Hello, apparently you've got problems logging on? [laptop is logged on, with Head of Personnel's inbox on display]

Head of Personnel - Yes, for ages now it's been taking me ages and ages to log in...

Head of Personnel - ...it took about ten minutes this morning...

Head of Personnel - ...and I've tried on this laptop and the computer in my office, I couldn't wait any longer and it's just driving me mad...

Head of Personnel - And they're really old these things, aren't they?

I hope to post some analysis of Chapter One tomorrow but there's a lot there and I'm only made out of dust.
Posted by Ragle Gumm at 10:57 PM

I would take the Humanist reading of Bulero's memo, myself. He's experienced all the drug-induced nightmare of Chew-Z and comes out with a greater faith in Humanity. It reminds me of what PKD has himself saying in Radio Free Albemuth - "The Bible says, 'My kingdom is not of this world,'...Which means there's a lot of explaining to do later on."

And those 'Minority Report' posts on my blog are all true - they're pretty much word-for-word what I get in my job!

I would suggest the key phrase is: "this lousy situation we're faced with," which is Leo's summary -- twenty/twenty hindsight -- of an Earth that has daytime temperatures of 180 degrees, a mandatory draft immigration law to colony worlds, a corrupt bureaucratic UN government, etc.

He seems to be getting at "perseverance" in the face of adversity...or perhaps how inconsequential we are in this vast universe.

Then again, there is T.S. Eliot's quote in The Wasteland, "I will show you fear in a handful of dust," or better yet, what Shakespeare writes in Hamlet, "why may not imagination trace the Noble dust of Alexander, till he find it stopping a bunghole?"

I take dust to simply be a metaphor for matter. We are animate matter lacking any sort of numinous spirit but, for all that, not doing too bad. We are not angels or gods but still manage to love and build communities -- even if based around the ersatz Perky Pat. Ersatz because, unlike that of God's or a demiurge's, our creation is not alive. Well, it seems alive at times because of the drugs.

Dick is a genious and this introductory line to the book proves it :) Malraux had a similar quote "The greatest mystery is not that we have been flung at random between the profusion of matter and of the stars, but that within this prison we can draw from ourselves images powerful enough to deny our nothingness.
- Andre Malraux"
If you compare this with dicks quote you see why dick is by far the most BRILLIANT philosopher of the 20th century. Just wait a little more and you will see :) People is not clearly getting what he is talking about yet. Search the greek manuscripts. Learn to speak greek like dick and you will be present to an apocalypse.