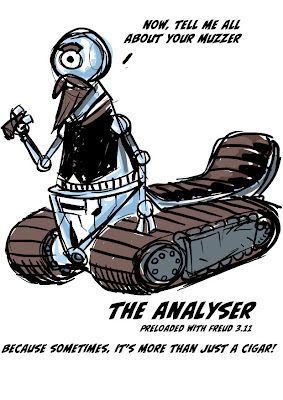 Reader Alejandro, who you may remember is part of a team of South American engineers developing a super cool shirt that casts electroluminescent hexagrams from the Book of Changes, recently sent me a link to a Wired.com article about an automated robot psychotherapist.

Those of you who have read PKD's The Three Stigmata of Palmer Eldritch will recognize this new technology as perhaps an early prototype of "Dr Smile", Barney Mayerson's suitcase psychologist, whose job it was to completely stress Mayerson out so that he would fail the psychological test he was required to take before his forced immigration to Mars.

Check out this line from the article which chronicles the author, Adrienne So's, attempt to come to terms with her boyfriend's tardiness in a session with MindMentor:

"But when one of MindMentor's helpers, the insult-slinging Provocative Bot appeared, I was startled by how wounded I felt: "This is Adrienne we're talking about," Provo Bot said. "Don't you remember she is a twentysomething baby from Berkeley, of all places!" How true!"

Let me get this straight, people are paying computers to insult them?! I'd do a better job of it for half the price! Wouldn't a more perceptive robot psychologist chide his patient for skimping on therapy and settling for a 8$-a-session game of emotional Pong (perhaps the apter analogy would be 'Breakout') instead of shilling out some real cash for a doctor with a faintly German accent and a fainting couch?

Whatever, does it work?:

"Do I think my problem is solved? I am more confident that I will respond to my boyfriend's tardiness in a more positive way. But ultimately, the fact that I responded so strongly to MindMentor's coaching speaks more to my humanity, rather than his simulation of it. Like monkeys who prefer cuddling with cloth mothers instead of wire ones, we're programmed to respond a certain way to stimuli, like encouragement and provocation. Any recovery that happens will happen on my own."

"We humans, the warm-faced and tender, with thoughtful eyes -- we are perhaps the true machines. And those objective constructs, the natural objects around us, and especially the electronic hardware we build, the transmitters and microwave relay stations, the satellites, they may be cloaks for authentic living reality inasmuch as they participate more fully and in a way obscured to us in the ultimate Mind."

What if I told you that in a study conducted by doctors, almost half of MindMentor's patients reported their problem solved after talking with the computer?

Update: According to the article in Wired, MindMentor's software is based on a program called ELIZA, developed by one Joseph Weizenbaum in 1962, leading me to believe that Dr Smile may have been inspired by Weizenbaum's work. Sadly Weizenbaum died just a couple of weeks ago. I've got to remember to add this footnote to my Three Stigmata notes.
Posted by Ragle Gumm at 11:20 PM

Hah. I think I went to high school with the author of that Wired article.