Covers of the Day - The Cosmic Puppets 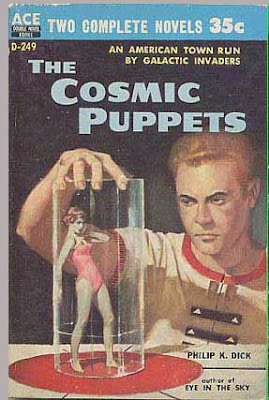 I recently read Philip K Dick's 1957 fantasy novelette The Cosmic Puppets for the first time and it's totally underrated! Not that it's PKD's best, but it is a remarkably telling precursor for many of PKD's later books particularly Time Out of Joint, The Penultimate Truth, and VALIS.

I'm writing up a fairly lengthy post about the book because Mike Philbin has offered me some space on his cool Philip K Dick Discussion Board over at Goodreads.com to be a Dick-head, to dicktate, if you will - so head on over, sign up and let's network, socially. Don't worry I'll post it here as well. Anyway, the novel really got me thinking again about the recurring themes in PKD's irv. So here's your chance; it's probably going to take me a couple of days to write the post up, so go out there and get that book. Don't worry, it's short, and you can read it in a couple of sittings. You won't be disappointed.

But for now, let's talk covers. I love the first edition Ace cover posted above. This was an Ace Double, backed with Sargasso of Space by Andrew North (never heard of him. Oops!). Here's the reverse cover: 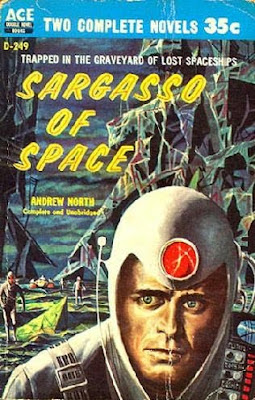 This Ace Double title is clearly being marketed as straight science fiction. Check the blurb on the CP side: "An American Town Run By Galactic Invaders" (they leave out the whole "from ancient Persia" part). This novel is fantasy rather than SF, and grew out of an offer of cash PKD could not refuse in 1957. According to Lord RC's Pink Beam: A Philip K Dick Companion (a must-have) The Cosmic Puppets began its life as a fantasy story called "A Glass of Darkness" published by Satellite in 1953. PKD left his mainstream novel Puttering About in a Small Land (4/5 stars in my book) and reworked the novella between March and May of 1957 - perhaps in a single sitting!

Here's the offer Dick received from Donald Wollheim as quoted by Lord RC:

"Scott hasn't yet shown us anything of yours in that non-sf category; probably he's trying them out on hardcover markets first. But please remind him that ACE Books might be especially suggestive to your work -- if you think any of it would fit the paperback market (...). We've done quite a range of original and reprint modern novels... You mention having written but 4 sf novels. What then was that one you had in the second issue of Satellite? I haven't seen it, but why not have Scott submit that one too? Then we could have 5 Dick fantasies... All best wishes, Cordially yours Donald A. Wollheim (3-29-57)"

Dick rearranged the chapter order at the beginning, opening the novel with the children playing in the dirt instead of Ted Burton approaching the town of Millgate. 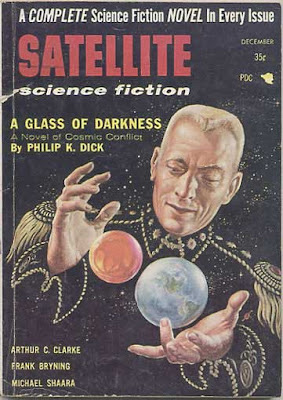 In the recent coverage of Disney's announced adaptation of "King of the Elves" several articles have falsely claimed the story is the only fantasy PKD wrote. Well, that's forgetting this one. In fact, people tend to downplay PKD's talent for and interest in Fantasy fiction, especially during his early years. Dick said of The Cosmic Puppets, in a letter to Anthony Boucher:

"I personally like it; it's pure fantasy, which as you know has always been my favorite."

According to Lord RC, The Cosmic Puppets was then forgotten. And wasn't reissued until 1979 "when Russ Galen at Berkeley Books purchased The Cosmic Puppets together with Dr Futurity and The Unteleported Man (not exactly the cream of the crop) as part of a package deal that paid Dick $14,000" (79). Here's the cover from their 1983 edition (my personal favorite): 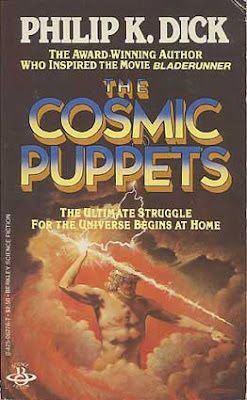 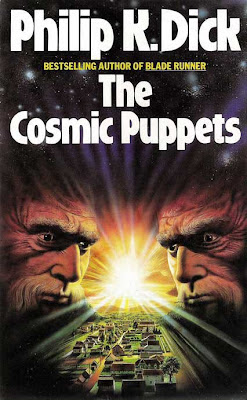 And of course, here's the Vintage Edition cover (certainly better than some of their others): 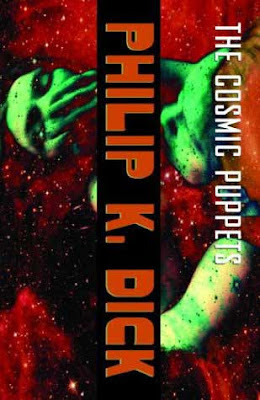 So why Puppets? Why now?

"Forty years ahead of its time, THE COSMIC PUPPETS deconstructs reality in a fashion seemingly fantastic but which examines our shared beliefs to unexpected depths. Not until VALIS where he takes up the theme again does Philip K. Dick so effectively lay bare our spiritual existence."

And I'll let this guy who appears to be little more than a proxy for puppet-master Paul Rydeen, well, I'll let his pan of the book do the recommending for me:

"For PKD's worst novel, "I'd have to nominate THE COSMIC PUPPETS (although DR.FUTURITY is a close second). Yuck! I hated this book. And the scene at the end where the hero drives off between what are obviously two giant breasts was the worst -- talk about catering to the lowest common denominator." -- John via Paul Rydeen in FDO 6"

Thanks to Henri over at the Philip K Dick Bookshelf for the covers!

Update: I know I've written a good post when io9.com rewrites it and posts it on their front page. Thanks! (PS - I'm not being sarcastic; your link over helped me cross the 100k hit threshold PPS - Yay for me!)

And let's not forget 'Of Withered Apples', while we're on the subject of PKD's 'fantasy' stories. 'Piper in the Woods' and 'Strange Eden' have elements of it, as well.

I am a well-read person living in Japan. I mainly read the "I" novel. Please link to my website, if you do not mind.

I love that Michael Shaara, who would later win a Pulitzer Prize for "The Killer Angels" is billed at the bottom of that Satellite "Glass of Darkness" cover. I didn't know he wrote Sci-fi back then,t too.

Weren't "Upon The Dull Earth" and "The Cookie Lady" also fantasy? How about "Small Town" and "The Little Movement"?

Check out this from the wikipedia page on the 'I - Novel';

'The story should also express a great knowledge of literature and reference as many works as possible in relation to a character's feelings. The writing should also not be too elaborate.'