A Letter From the Dark Haired Girl 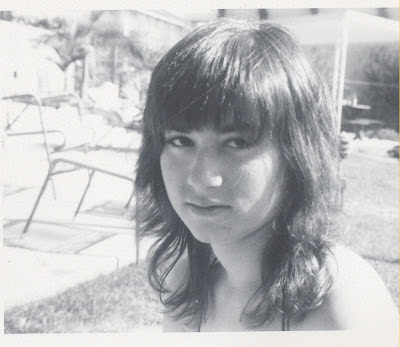 Linda Levy has placed her entire correspondence with PKD for sale on ebay. She's also written up a very extensive recollection of her times with Phil. Her unflinching portrayal of PKD in the early 1970s is incredibly detailed and she writes extensively about both his charm and the deep psychic pain he seemed to be in.

Check out the lot here and read the .pdf file here.

One of the most interesting items in the lot is the letter Linda wrote to PKD before they met, when he was still in X-Kalay in Vancouver. Linda was a student at Cal State Fullerton and in her Chaucer class, Professor Will McNelly read a letter he received from PKD, which basically stated he had no where to live, and no one to talk to. Linda took it upon herself to write Phil.

While it's impossible to ever really 'know' Philip K Dick from this vantage point 26 years after his death, after much study I am starting to get a sense for the guy. And I know this letter must have totally blown his mind (click images to enlarge): 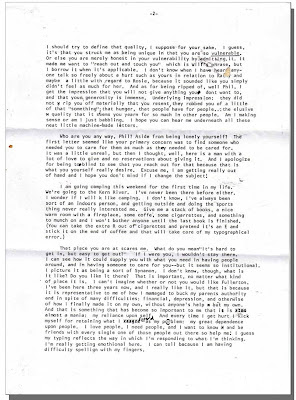 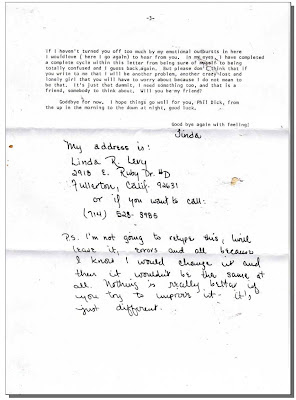 Can you imagine PKD's mood upon reading that letter? After he read it, he asked McNelly to have Linda pick him up at the airport (natch). He later described Linda waiting for him at the terminal in LAX as 'destiny in a mini-skirt.'

For those of you that are surprised by the price Linda is asking for these letters, check out this paragraph in a December 2007 Vanity Fair article about artist and collector Richard Prince:

"Prince is quite happy to discuss the prices of his exotic acquisitions, revealing that he recently paid “a little bit over $100 grand” for the only known first edition of Hammett’s The Glass Key in a dust jacket. Then there was the copy of Philip K. Dick’s 1968 novel, Do Androids Dream of Electric Sheep?, inscribed to Dick’s fellow science-fiction writer Tim Powers. “I paid $150,000 for that,” says Prince. “I was more than happy to pony up—it’s an important book for me.”"
Posted by Ragle Gumm at 10:32 PM

I fully accept that Levy is sitting on a goldmine, and I have no doubt that the letters are probably well worth the asking price. But the archivist in me can't help but think that these belong-- if not in Levy's home-- then in a library.

As far as this unflattering portrait of (aspects of) Phil Dick goes, this was all revealed, if I am not mistaken, in Lawrence Sutin's biography of Dick. If it was not in there--although I'm pretty sure it was--then it must have been in THE DARK HAIRED GIRL. I've read both books, but it's been years ago for both, so I may be confusing where I first read about Dick's sometimes abusive behavior toward the women in his life.

I've read that Dick was resentful of editors and other "authority" figures he dealt with, although he would never let on that he resented the "authority" wielded. Ted White, a sometime sci-fi writer, critic, and long-time editor in the late 60s and early to mid 70s of the pulp sci-fi mags AMAZING and FANTASTIC, wrote about his friendship with Phil, and how it soured. Dick sold WE CAN BUILD YOU to White for publication in AMAZING in two parts, under it's original title, A. LINCOLN, SIMULACRUM. White says he felt the book's ending didn't quite work and he suggested to Dick that he (White) could write a brief,
revised ending that would work better. White reports that Dick whole-heartedly agreed that White's ending was superior and that he should append that to the novel for publication. It was only later, when White noticed his (largely epistolary) relationship with Dick seemed to have become strained--or did Dick cut it off abruptly? I can't recall now--that White learned Dick had resented from the start White's suggestion and added ending. Apparently Dick took to telling other, newer friends that White had added the changed ending on his own, without asking or telling Dick he was going to do so.
Of course, one can argue this is all he-said/he-said, but even when I read this anecdote, it had the ring of truth to it.

As far as I know, the book publication of the book reverted to Dick's original ending.

Yes, such personal revelations about Dick as a person are unflattering and disturbing and a shame, but Dick was an emotionally disturbed human being, along with being a brilliant creative mind and charming friend and empathetic human being. Heck, any man who is married five times has something going on that's not quite stable. In the end, all we really should appraise is the work, and if we want to know the life of the person behind the work, then we must know the whole truth and not merely a bowdlerized rendering. We often clamor for tales of debauchery, angst and torment in the lives of writers and artists we admire, as it seems (to some) to be "romantic," to reveal the turmoil driving the art. In Dick we may not find such truths to be so edifying because his art was so imbued with an ethic of caring and respect for all living things, but we must also see that the android, the creature without empathy for others and whom Dick feared and deplored, was an aspect of Dick himself.

these valuable commodities had better get published and well-studied soon!

prince as in "prince"?
like, the person people call "prince"?
or am i missing something...being a total dick-head and a monstrous hammett fan and an avid prince listener, this web of connections is blowing my pea-brain.

Bev Davies up here in Vancouver, another Dark Haired Girl (before the grey). I was a friend to him when he was in Vancouver, and I understand I am named in the book. I sold a letter from him a while back to pay bills. I think I had another letter but I do not know where it might be. I would love to read it again. To me he was kind, and enjoyed coming to and sitting in one particular chair at my house, and listening to stories and then he would tell them again and spin them to PKD.

Hi Bev,
I run this blog. Would you please email me (dcgillATsfsuDOTedu)? I would love to talk to you a bit more...