A Short Interview With Larry Sutin 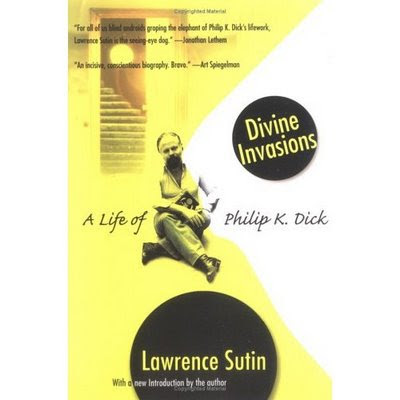 Lawrence Sutin's Divine Invasions A Life of Philip K Dick, was the first published biography covering Dick's entire life [a point of clarification: Anne Dick actually completed her PKD biography/memoir, A Search for Philip K Dick, prior to the publication of Sutin's biography. Furthermore, it is clear after reading both that Sutin used a lot of Anne's primary information (interview tapes, etc) in his book]. Larry's been busy following the success of Divine Invasions, publishing Do What Thou Wilt: A Life of Aleister Crowley in 2002, A Postcard Memoir in 2003, and All is Change: The Two-Thousand-Year Journey of Buddhism to the West. I tracked Larry down and shot him some questions and he was kind enough to respond.

Q: Have you been keeping tabs on PKD's career, such as it is, in the years since the biography came out? What do you make of it, specifically, what do you think about the Library of America volumes?

A: I have been keeping tabs loosely on PKD's career, and I am aware that his reputation has grown considerably in the past twenty years. It does not surprise me that awareness of the quality of his work continues to spread. In part, but only in part, I think, that has been triggered by the number of film adaptations. The principal factor is that his best works are remarkable, and the techniques that he employed are now part of accepted 'mainstream' literary practice as evidenced by Jonathan Lethem and other writers. The Library of America volumes are only fitting, given what PKD accomplished, and the influence he has exercised not only in writing but in the arts, theater, and music both popular and classical.

Q: What kind of toll did researching his life so closely exact on you? What period of PKD's life did you find most interesting?

A: I enjoyed writing the biography. The toll came from the sense of responsibility I felt in getting it down right, not bowing to the pressures of those who wanted him incompetently and posthumously diagnosed and thus tucked safely into a category, or of those who insisted that 'their Phil' was the only true Phil. I tried to make sense of it all as best I could. I interviewed over one hundred people, read the Exegesis in its entirety, as well as the correspondence and other private papers. That was exhausting. The negative aspects of his life were no more difficult for me than the happier aspects--what I was going for was a detailed and accurate portrait, come what may. My own feelings were channeled into that task. I never rooted for PKD to turn out to be a certain sort of person. I was not surprised by the pain he experienced and sometimes caused. He was a human being.

Q: What was memorable about the project?

A: What is most memorable about the project to me, in retrospect, was the process of taking in so much and such disparate information. I was immersed in the complexities of a human life that was not my own. That was dramatic and exciting for me. I revelled in the complexities--my assumptions had to be put aside, and something more vital had to be discovered, a pattern that gradually revealed itself to me as a portrait painter, as it were, of a contradictory and extraordinarily creative man. I did not know what I thought and felt about him until the book was completed. Fun.

Q: What period of PKD's life did you find most interesting?

A: Believe it or not, I did not find one period of his life any more interesting than any other. My obsession at the time was to find out everything I could, and in that state of mind everything was interesting.

Q: In hindsight, are there any changes you'd like to make to the biography?

A: I have not reread my biography in twenty years. I am sure that there are places that it could be improved, but I did the best I could at the time and my passion now is for the books I am working on now. I'm a different person than I was when I wrote it, and I think the best favor I could do to my book at this point is to leave it alone.

Q: Is there something you think the general public gets wrong when thinking about PKD?

A: I think the general public has shown a great deal of appreciation for PKD's work--so the general public fundamentally gets it right. I would say that there still seems to be a common tendency to wonder over whether he was 'crazy,' which is not a question that interests me much--as I think that such a label is culturally conditioned, patronizing, futile, and enables a not too subtle distancing, by those who make the accusation, from the full impact of his lucid and powerful novels, stories, and essays. Also, I think people tend dramatically to overrate the influence of drugs on his writing. They played a role, but his essential vision came from his personal experiences, especially during his youth--as of course tends to be the case with us all.

Thanks Larry!
Posted by Ragle Gumm at 6:25 PM

I read Mr. Sutin's biography of my husband many years ago, and I had the impression that he was offering simplistic answers to copmlex questions. I would love to see a revised edition. Too litle has been made, for example, of the health problems that Phil suffered due to his premature birth, as well as to the psychological problems that arose from the death of his twin sister in infancy.

I agree that Sutin's "psychologizing" efforts in the bio oversimplifies the complex problems in understanding PKD. Same applies to his other biographers--especially Rickmann's MPD/abuse theory. We need a biographer who is sensitive to both the intellectual history and religious studies aspects of Dick's life and thought.