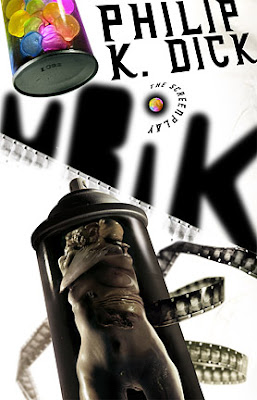 The ultra-rare, and until now difficult-to-find screenplay PKD wrote for a cinematic adaptation of his novel Ubik, is now available as a hardcover from Subterranean Press.

I have yet to read this, as I was reluctant to shell out well over $100 bucks to read the previous edition and just yesterday discovered this new edition was out.

"The screenplay features an ending that differs markedly from that of the novel."

What else does the screenplay feature?:

"Dick included far more parenthetical description and interpretation than can be standard for screenplays, and so we have here his considered, after-the-fact portraits of Glen Runciter, Ella Runciter, Joe Chip, Pat Conley, and Ubik itself. And too, with a facility that's scarce among novelists, he smoothly adapts his story to the wider, deeper ranges of the film medium. The Ubik 'ads' are much more effective as actual intrusions than as chapter headings, the soundtrack becomes a central element (and makes us wonder what music Dick would have chosen to complement some of his other novels), and he presents the dysfunctions in time and perception even more effectively when he imagines them enacted on a movie screen. In some ways, in fact, it almost seems as though we're getting a purer version of UBIK—something closer to the original conception than the text of the novel." - From Tim Powers' new Forward to the screenplay.

Sounds good. Interesting to note that Dick seemed to both enjoy writing the screenplay but also benefited from it by learning something about his process as a writer.

In an interview with Paul Williams on Halloween 1974, PKD said: ""When I was doing the [Ubik] screenplay, I realized I've got a little screen in my head, and the people walk around on it"

Williams says: "They're real" [unclear if this is a question or a statement]

PKD responds: "They're little, Paul, they're about that big - [laughter] - Yeah, they move around, you know, I was going like this, looking up, talking and saying, 'there goes Joe out the door, slam.'...I didn't realize it until I did the screenplay [for Ubik] where I had to visualize, and I realized I didn't have to 'cause that was -- I didn't know any other way to do it. And I got to going -- I was literally looking up, type type type and look up" (Only Apparently Real 76)

PKD was originally asked by Jean-Pierre Gorin to write an adaption of Ubik, with hopes that Francis Ford Coppola might finance production, alas, funding fell throuh and the Ubik adaptation was scrapped, that is until recently when a production company called Celluloid Dreams optioned the novel. It's unclear whether or not the production will be using PKD's screenplay. I seem to remember a Hollywood friend of mine saying that PKD's script was on the long side and contained so many directions that many filmmakers might balk at trying to shoot it.

The screenplay is still on the expensive side: hardcover editions are listed $35 and the Wub-fur bound 'lettered' editions, signed by Powers and Tad Williams (who wrote the Afterward), are $150. So the screenplay went from expensive and difficult to find, to expensive and easier to find. At least we seem to be moving in the right direction, though I wonder, perhaps it'll be cheaper when (and where) we're all dead.

After listening to Vangelis' soundtrack for Blade Runner, it's difficult for me to imagine another style used for a PKD-based movie.

If I were to nominate someone tho, I'd surely go with Trifonic. Their blend of glitchy electronics and what I can somewhat spot as "rock" (in the most non-generic way possible) is compelling, lush, ethereal — sometimes, it unfolds traces of paranoia. Other times, the crashing rhythms peel new layers of understanding. Like Dick's work.

Actually, I have come to dislike Vangelis' soundtrack to BLADERUNNER...it's too slow and lugubrious. Anyway, I intended to post about the UBIK screenplay, not about Vangelis.

I've read the screenplay, as I bought the original edition at the time of its publication. I read it then and haven't since, so that's what? 20 years? Accordingly, I don't remember it well, but for me, it didn't work as well as the novel. Why? I'd have to reread to know. (Or perhaps I'd change my mind on second reading.) It might have to do with my difficulty in immersing myself in playscripts or screenplays...the authorial asides and directions are too intrusive to me. I just think I came away thinking Dick had given the material the full force of his efforts and thought and emotion when writing the book, and the script just seemed as if he were "reheating" the material.

I certainly recommend any Dick fan buy this newly available edition, and I might even spring for it if I see in the bookstore, and I don't mean to suggest it is not entertaining or a worthy try...only that the novel is a masterful statement that the screenplay did not (as it seemed to me at the time) replicate.

Let's see what others think. Or even I, if I reread it.

Actually, most of the description and interpretation, which are not standard in screenplays, were added by others. Tim Powers wrote much of the UBIK screenplay book.
~~ Tessa Dick
~~~

I'm not sure the sudden fading-in of the Ubik spraycan ads would work, myself. I've only read it the once, though. Give me a chance, it only arrived yesterday.

I can make the music for it. I know exactly what to do, you see.

Well, this glitchiness is going to date REALLY hard. It's going to sound as passé as 80s hard rock.

In the future, everything will be old, there'll be more retro than you could imagine.

The ultimate transcendental extension of music is the choir, choral sounds. I'd make the 1st section of the movie ambient choral works, nicely mashed up in melodyne or something to make it a bit more artificial and plastic. However, I'd avoid the "tinny & glitchy" sound of today's gear, I'd want it to sound smooth and futuristic.

As the film progresses, the vernacular and artifacted aspects of the film would appear more and more, but with a bio-engineered flavour distorting and artifacting these trad sounds. I'd probably use a piece of meat as a transducer (bolt a speaker coil onto it) and play pitch-shifted banjo through it. That sort of thing.

I could do a better soundtrack for this film than any of the "name" film soundtrack guys in LA.

For sure. Danny Elfman's Salvation score was even shitter than the rest of the film. A late romantic orchestra?! For Terminator?!!! No way man.

A random selection of tunes stashed on myspace which totally doesn't reflect anything from my output, but who careth LOL

This is the main PKD book that kept shouting to me that it should be a film, and I read it before Blade Runner came out. I haven't seen the PKD script, but I am quite sure whatever is very close to the novel would make an excellent movie. That Phil & Van Gogh never saw the extent of the love for their work is both sad and ironic.