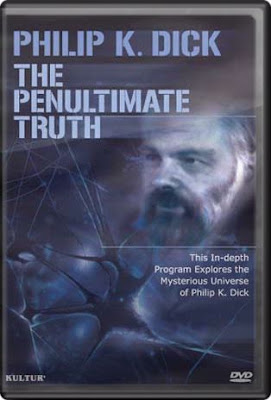 I've a bit of catching up to do. Now with several dozen papers graded, leftover turkey dealt with, and my radio interview behind me, I find I have some time.

First order of business is this PKD-documentary which recently became available on Amazon. It's the fabled Argentine documentary which I saw before it was released and now highly recommend. The documentary features interviews with Kleo Mini, Anne Dick, Tim Powers, Tessa Dick, KW Jeter, Ray Nelson, Gerald Ackerman, and others and is easily the best PKD-doc out there, eclipsing The Gospel According to Philip K Dick (which suffers from inadequate depth and too much typing) and the short documentary packaged with the Blade Runner Multi-DVD spectacular.

I'll try to get a hold of the producer(s) (you didn't hear this from me, but I heard the production was plagued by political infighting and production changes - kinda like Blade Runner) and see if we can't do an interview. Frequent commenter Robert Cook gives the doc four stars in an Amazon review writing:

"I dock the dvd one star primarily because the framing device within which Dick's life is told is ham-fisted and cliched: two "private eyes (dicks)," one even wearing a pistol in a shoulder holster, hole up in a room, smoking cigs, listening to tape recorders, filing through dossiers, making notes, tacking photos to a bulletin board, listening to a "control voice" over a speaker in the room (the film's sparse narration), attempting to get to the bottom, it seems, of the conundrum of Dick's "mystical experience.""

I kind of like the framing of the doc, but I can see how others might not.

Anyway get your copy for the holidays.

Thanks be to Robert Cook and Streetworm.
Posted by Ragle Gumm at 1:55 PM

Sounds good. I'll be looking to pick this one up.

Also, you seem to have forgotten about the BBC Arena documentary about Dick from '94, which is excellent in its own right. It's available on Youtube, in case you haven't seen it yet.

I must have it!

Yes, the BBC Arena doc on on PKD is wonderful, and I just wish they would release it on DVD so we could enjoy it full-size and full quality.

In my Amazon review of this documentary, although I take the film to task for its framing device, I label the dvd as essential, and highly recommend it to any PKD fan. Most valuable are the filmed excerpts of PKD giving his infamous speech at Metz, France in 1977.

"the filmed excerpts of PKD giving his infamous speech at Metz, France in 1977"

I think I just wet myself. My Amazon order is in.

The trailer is looking quite good. I didn't know that the Metz speech was recorded and believed that the only thing available was the interview he gave to two French students (which is available for sale in France.)

Just Yesterday I overnighted the PKD Documentary and a gift for my daughter. I found the info refreshing. Of special interest, at least to me, was the fact that Phil, a non-scientist (in 1977) referring to our condition of being in a "computer program", especially the "glitches" in the programming. The "deja vu". IMO - Anamnesis.

Does anyone know if Phil experienced an above average incidence of Deja Vu?

I'm willing to say that it was present. What do you think?

I've watched this documentary several times, and overall, I am impressed with it. They seem to be following the evidence where it leads, rather than simply using snippets that back up their own theory. The frame is kind of hokey, but otherwise, it is a fine production.

I was especially impressed with Ray Nelson.

Mr. Jeter certainly showed his true colors, so I don't need to comment on that.

Ive been reading PKD for several years now, and the more i read, the better it gets. I'd put off Do Androids Dream til now, and Im glad i did. Seeing his repeated themes presented in new and unique ways brings added dimension to the novel. But the point, the point. You often post about living in PKD's world, and i encountered something that coincided so directly with Do Androids Dream that i wanted to share it
http://www.cnn.com/2008/TECH/12/02/airport.security/index.html
Its eerie...right down to the name of the company, WeCu.

Thank you for recommending this! I just Netflixed it and enjoyed it immensely.

Is the Metz speech audio or video available anywhere? The clips in the doc where good but I need to hear the entire thing.

From what I gathered over the time I spent with the Argentine documentary team, Dario Schwartzstein, who was the original director, was planning a theme about Philip's search for spiritual meaning in his life. He was removed from the project and the final documentary seemed to me to indicate that Philip's pink light experience showed that he was slightly loco. I thought Dario was right on and it was a shame he wasn't allowed to finish the project. Still I thought it was quite good. I liked the frame of the FBI office.

All the Argentinians were hard working, warm and polite and worked together well. They stayed with me three days and it was a pleasure to spend time with them.

Thanks for that information! I'm ordering it now.

I did get my copy and thoroughly enjoyed it. I think they were a bit hard on the last part of his life. Having just read, "The Divine Invasion" for the first time, I would say PKD was in a unique and interesting state of mind at the end of his life. Many of us can relate to at least some of what he was experiencing.

As another poster said, Ray Nelson was interesting. he sets the record straight about Phil and LSD (despite Leary and Lennon thinking "Palmer Eldridge" was acid inspired.