Flow My Tears to be Next PKD Film 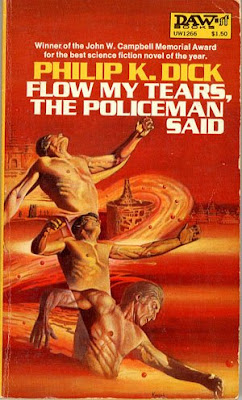 The Intertoobz are abuzz today with word that Halcyon Productions, who signed a first-look agreement with Electric Shepherd Productions, have decided to go with PKD's Flow My Tears, The Policeman Said as the production company's first adaptation of Dick's work.

I think this is a good choice, and I'm glad to know John Simon (currently finishing up a film version of Radio Free Albemuth) is expected to produce (along with Isa Dick-Hackett, and the two Halcyon studio heads Victor Kubicek and Derek Anderson - currently preparing Terminator Salvation for release) and Dick's oldest daughter Laura will be an executive producer.

I've written at length about Flow My Tears, and believe it has great potential as a film. It will be interesting to see how much of the novel's moral ambiguity (which includes an incestuous relationship between a brother and sister and a lot of drugs) will make it into the film. Here's hoping the effort will rival A Scanner Darkly which I felt benefited from Laura and Isa's hard work and input. As long as we can keep Tom Cruise out of the film we should be ok (remember Cruise owned the option for Flow for quite a while and expressed interest in playing Jason Taverner).
Posted by Ragle Gumm at 9:53 AM

As much as I hate to admit it, Seacrest would be an excellent choice! Just schmaltzy enough. Too bad William Shatner isn't 30 years younger though.

Wow, so awesome! Such a great story. It really will be interesting to see how certain parts are done, I believe this is where Scanner Darkly greatly benefited from using rotoscoping.

Hey, whatever happened to RFA anyway?

Gosh, FMT is one of my top favorites...

Are they going to use rotoscoping on this one too?

Oh, so this is why someone bought one of my Jason Taverner Show spreadshirt shirts! Boy, I was wondering what the deal was!

what i want to know is, what dumbass title are they gonna give it. Flow my Tears seems a little.... artsy

Tom Cruise has an unreasonable affection for science fiction, it appears...

I think George Clooney would make a decent Taverner. Although the American Idol crew totally works as well -- especially Paula as crazy Alys.

There are three PKD novels that I'm surprised haven't been made into movies yet: Flow My Tears, Ubik, and High Castle. (It doesn't surprise me at all that The Three Stigmata hasn't been filmed. That book probably frightens filmmakers.) Good to see one of them moving forward. All due respect to books like Time-Slip, but Flow is one of the books that needs to be filmed.

I'm not a big Tom Cruise fan, but after watching Minority Report, I wouldn't mind his involvement at all. It's one of his better performances, especially toward the end when he confronts the man who he thinks killed his son. And just imagine the attention he would bring to the movie, and by association, the book.

Yeah, I could actually imagine Cruise as Taverner...

I just wouldn't like to see this become another Minority Report. I actually like Minority Report, it is a good film, but it's not a 'PKD' film. It's a bit of a mish-mash of ideas, unlike something like the Scanner Darkly film. Blade Runner maybe also wasn't a 'PKD' film, but it was just focused on ideas that weren't as much what Dick was focused on. Anyway, I really want to see a proper faithful adaptation of Flow, it could be amazing, but I can't see it being faithful if Tom Cruise is playing it somehow.

The Little Sciento-lunatic was the best thing about Minority Report. That's how bad it was.

And as for the eventual title of the Flow... film, I have a horror of it being touted (in the UK, at least) as 'I'm A Celebrity, Get Me Out Of Here - The Movie'.

Can't wait for the PKD article machine to start up again once the film is released. Nobody reads Dick for the writing, Dick was unappreciated in his lifetime, Dick was a crazy genius, etc.

I hope the film is good, obviously, but the best thing to come of this will probably be a re-issue of the book with a sticker on the cover saying that it's "NOW A MAJOR MOTION PICTURE FROM LOWEST COMMON DENOMINATOR ENTERTAINMENT."

It is my understanding that the company that purchased the rights to "Flow" also purchased the rights to all PKD writing for 3 years. However, I read that Ubik had been picked up by another company maybe a year ago, so what happens if this company wants to make Ubik? From an earlier announcement, it was stated that they intended to start with "Ubik", which would be my favorite for an adaptation, though I would still be VERY happy to see a good adaptation of "Flow" on the screen. Anyone know what has happened with "Ubik"?

Dev, this is from Wiki:
"Tommy Pallotta, who produced the film adaptation of Dick's A Scanner Darkly, said in a July 2006 interview that he "still [has] the option for Ubik and will be looking to make a live action feature from it."[7] Dick's daughter, Isa Dick Hackett, said the film adaptation of Ubik is in advanced negotiation.[8] In May of 2008, the film was optioned by Celluloid Dreams. It will be produced by Hengameh Panahi of Celluloid Dreams and Isa Dick Hackett, of Electric Shepherd Productions. It is slated to go into production in early 2009.[9]"

Surprisingly, I have no reservations about this. I like the book a lot, and as PKD stories go, it should be a fairly straightforward adaptation. It's got far fewer 'fantastic' elements than most of his novels. There's long stretches of the story where it's almost a 'straight' non-genre story.

Which begs the question: Has anyone optioned any of PKD's non-SF books? "Mary and the Giant" has B-list indie-film written all over it!

I think there are a lot of good ideas floating around here, it's time to put mine in. Maybe hollywood is reading.

I've hered people mention secrest and cruse. The character of Jason Taverner is Older. Point blank. In order to remain true to the story that leaves the others out.

The main character is an older man who aged extremely well.

The part will require an emense ammount of depth. The acter will have to start off expressing uber hedonistic qualitys, and transition into the frightened tourtered soul Taverner starts to become.

The only actor with the look, age, and talent requriment i can think of is Patrick Stewart.

And although i am a huge sci fi nerd, dick-head, treekie, i'm saying this all based on the demands for the part. I would sugest Patrick Stewart if he was a daytime soap opera actor (if i was somehow still aware of his wealth of talent).

If Al Pacino were younger he would be the perfect Taverner. Think about it. He can play someone confident and full of himself (like in the Devil's advocate)and he also can play someone confused trying to cope with the change his world has gone through(like in some parts of Scent of a Woman or Donny Brasco). Well, we would have to settle with George Clooney.

"Well, we would have to settle with George Clooney."

Not a bad choice, as long as he takes it seriously and plays Taverner instead of playing George Clooney. We know he already has an interest in PKD; he produced Linklater's A Scanner Darkly film.

interesting bait and switch
-- as soon as I inquired about my share of the UBIK movie money, they dropped UBIK like a hot potato and never mentioned it again
-- and now they pretend that Flow My Tears was their first choice all along
-- well, I have a claim on that one, too, but I'm afraid that they'll drop it if I ask about my share of the money
-- I don't want to sabotage every effort to adapt some of Phil's best work
~~ Tessa Dick
~~~

This would be my first choice for the next PKD film adaptation.

But what ever happened to Radio Free Albemuth with Alanis Morissette? I was really excited about that one.

What's wrong with Tom Cruise? I like him . . . as an actor. Would I want to hang out with him and have a few drinks? Probably not.