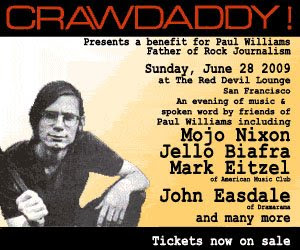 I received an email yesterday from Electric Shepherd Productions announcing a benefit concert for former PKD-executor and founder of Crawdaddy magazine, Paul Williams, who as I recently wrote, needs full time care after a long, slow decline following a bicycle accident. The concert is in San Francisco on June 28th, and sounds like a good show based on the lineup they've put together, above and beyond the good cause it's supporting. Perhaps this is an opportunity for a gathering of bay area Dick-heads, as we could meet up and get some drinks while we watch the show. Let me know in the comments if you are interested. If you don't know about Paul Williams's contributions to our culture's ultimate embrace of PKD's novels, well, you just aren't paying attention. Redeem yourself by reading Paul's 1975 feature on PKD for Rolling Stone magazine here. And if you doubt Paul's (and Crawdaddy magazine's) contributions to pop culture, remember, he rode to Woodstock in the Grateful Dead's limo. Then read this interview Crawdaddy arranged between William Burroughs and Jimmy Page. More on Williams here.

Buy your tickets here. Hope to see you at the show.
Posted by Ragle Gumm at 2:04 PM

Wish I could go.
I've enjoyed reading some of Paul's old Rolling Stone contributions. I hope lots of people go and support him.

wow what I lineup. although I'm disappointed not to see Our Blogmaster on it...

reminds me--ever see the CD by a band calling itself VALIS? had a PKD photo in the liner notes. wish I'd bought it the time I found it in a used bin.

I hope the benefit goes well but I don't think the date of his famous RS article is 1977 but earlier- when he interviewed Phil for the article Christopher was young and still had the undiagnosed hernia as can be heard in the interview tapes-which were released to PKD society members at some point. Also it described Scanner beofre publication - this would put the article at @ 1975 IIRC

too bad so many live so far from the west coast. Paul has always been a gifted and prolific writer. I have the cd Valis. cool music.

I've always enjoyed Paul Williams' writings, but I've long wondered about something he wrote in the PKD article for Rolling Stone. "I make an unconvincing California detective-- unable to drive a car--taking notes I can't read later." What exactly does he mean by this?

Paul was checking out the area that PKD lived in, described in the article. He's just saying that everyone in California drives, so a non-driver is going to have a hard time. The crack about his not being able to read his own notes is just that - having a laugh at a detective who has trouble getting where he needs to go and then can't decipher his own notes about what he saw when he was there.

TDH, I think you should correct the Rolling Stone article date from 1977 to 1975 so those who don't click to see it will know the actual date.

Pantomime-Horse: Thanks, done and done.