io9.com has an interesting story posted about Dick's estate switching literary agents. Apparently, gone is PKD's longtime agent, Russ Galen, and in his place, The Wylie Agency (client list) - known for representing heavy hitters like John Updike, Philip Roth, and Nabokov - will take over. What does this mean for us? We'll just have to wait and see. Of course there's this rather annoying quote from the io9.com article: "[The agency change is] the literary equivalent of an outsider artist being shown at the powerhouse Gagosian gallery."

Now that's just plain inaccurate. An outsider artist is generally thought to be someone who knows nothing about the world of high art he is welcomed into because his naivety is read by cultured art snobs as groundbreaking. Dick was very much aware of the state of the art. We know he read Joyce, Stendahl, Flaubert, Faulkner, and other recognized purveyors of 'high art.'

Can a literary agency get Dick filed next to Dickens in the mainstream literature section, or is he forever banished to the stubby science fiction aisles, or are all genres breaking down around us? Or, perhaps we've reached the point in the PKD novel we're all living when the order of the Universe is subsumed by entropy and chaos?

Here's a picture of Andrew Wylie - apparently, they call him 'The Jackal'... (Not photographed: chrome eyes, arm, teeth...) 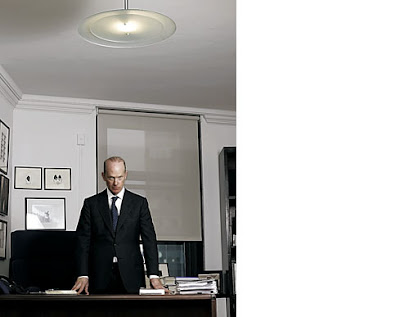 I still mourn the book that Russ Galen told Dick not to write.

The story goes that PKD told Galen he wanted to write a novel about the assassinations of JFK, RFK, MLK, and others, with some kind of conspiracy tying all the murders together. Galen told PKD, in so many words, that nobody would be interested, that era was over and he should get on with something else.

I know PKD explored the idea, somewhat, of a mega-conspiracy involving the murders of 1960s icons in his letters, interviews and the Exegesis, but they're only teases as to what he might have come up with.

Then again, PKD pitched many books he didn't end up writing to many, many people, so....

From that summary, it sounds like Galen was right about that book.
Dick was a master of paranoia but if he'd actually written something about real-life assassinations I'm not sure that would have been a good idea. I love his paranoid sci-fi because it teaches us to be suspicious of the very nature of reality but I don't want to be given a lesson on crack-pot conspiracy theories.

Anyway, if the agency change means that any new PKD material is released then it's obviously a good thing for us, but do we really want PKD to be accepted any further into the mainstream? The LOA release obviously means that PKD is being considered a credible literary great, but I'm not really bothered that the average person knows him as the crazy guy who wrote Blade Runner.

I don't know. As a relic of the mid-1970s, such a book certainly would certainly be interesting to read now.

PKD explored plenty of 'crack pot conspiracy theories' in his stories. Quite a few of them turned out to be true though, didn't they?

I don't know about you, but when I looked at that photo, I saw the 'aquatic horror shape'.

I agree, that "outsider artist" remark was definitely obnoxious.

What "new" PKD material is there to be published?
It seems everything Dick wrote is either in print or being republished. TOR seems on the way to republishing all his mainstream novels, and aren't all of his sci-fi books and stories currently already available?

I suspect this new high-powered agent has seen Dick's ascendance over the years into the literary firmament, and has decided he wants in on the gravy train, and he probably convinced the estate he could make them a lot more money than Russell Galen, who had worked with Dick personally.

interesting, and great post as always. As you know, Dave, I'm in absolute agreement about this notion of PKD as "outsider artist" as being totally wrongheaded, even when used analogically as it is here. The guy wasn't crazy and none of his successes are accidental. He was one of the most sophisticated literary architects of his generation, based on his deep knowledge of philosophy and modernist literature, and his practical ability to translate high culture ideas into weird SF.

Darryl: so true, what a bummer about the conspiracy novel--I have no doubt it would have rivalled illuminatus! --although the unwritten PKD books have an interesting reality in themselves as mysterious unformed entities that never underwent the formality of actually being written. As a corollary to that thought, it's interesting how there are various degrees of unwrittenness to them, from Lies inc. to the notes on High Castle sequels, VALIS almost versions, and interviews on Owl in Daylight. Ripe material for speculation indeed. Reminds me of the "lost" texts of Pseudo Dionysius on Symbolic Theology, Theological Representations, and angels, which may have never existed in the first place.

http://www.philipkdick.com/links_contact.html. Russell Galen has even been removed from the "Thank You..." section of the page. I won't risk becoming an entry in "Shall Isa Sue ?" by quoting the removed sentences.

An interesting tidbit about the Wylie Agency can be found here. http://www.wylieagency.com/submission.html Clearly the type of agency that would have given PKD unwavering support back when he was breaking into his career or having slumps. Admittedly, I don't know enough to make a knowledgeble judgement about the decision but it doesn't bring joy to my heart to see the new page's listed contacts.

"Anyway, if the agency change means that any new PKD material is released then it's obviously a good thing for us,..."

I think it's time to reread "If There Were No Benny Cemoli" unless you're thinking of the Exegesis notes or the unpublished Selected Letters volume. Not that I see any reason an agency change would effect those matters.

In terms of 'new material' I was thinking more about his letters. The Exegesis excerpts included in my edition of the VALIS trilogy is more than enough for me.

I feel the same way about the exegesis whose nature I think was best described by Paul Williams, Tim Powers and PKD, himself, if "Notes Made At Night By A Weary Writer" was about them. I may be obsessive but can't remember everything all the time or be interested in everything PKD related. The exegesis has never been of real interest to me and if not for TV Blade Runner is likely the only movie (adaptation, inspired by, or dubious relation of any sort other than exploiting his name) I'd have seen.

I see the Wyley Agency link I used before doesn't seem to display completely. It's from the agency site and is something like a single sentence page saying no unsolicited submissions are being accepted at this time.

With iPads and other readers, 'books' are about to be gloriously re-invented. Text, audio, vidclips, comics, maps, easily accessed and plentiful reference material...

The possibilities of e-booking PKD's massive collection of novels, short stories, letters and essays are mind-boggling, endless. But not just e-books, and there's a name that needs to die quickly and be replaced, when it comes to PKD you can have something much more than that.

I think I just worked out why the PKD Estate is not happy with Google using "Nexus One." It will interfere with their plan to produce dozens of PKD androids which can be sent on tour across the planet to deliver 'in person' Philip K Dick readings and lectures.

Nexus PKD One will be the basic first gen model. It will deliver pre-set reading and lectures, and be able to answer a few dozen questions.

Nexus PKD Two will be able to answer hundreds of questions, snort and spill snuff and deliver readings and lectures in a few different moods and tones.

Nexus PKD Three will do all the above, plus be able to have very convincing anxiety attacks.

Nexus PKD Six will be self-aware and used to colonise Mars and the moons of Saturn, until they all simultaneously realise they have a pre-programmed life span and steal shuttles to return to Earth and...well, you know the rest.

I'm a little late to this discussion, but I need to add my bit. - I'm not really sure what an "agent" would do (for PKD), but I feel that a lot is left to do. There is a lot of stuff left unpublished or "under-published", e.g. most of the letters (the published volumes contain some random? sample). And there is certainly other “stuff” out there, e.g. the poetry attributed more or less to Dick and “very early writings” that survive only in individual issues (as e.g. quoted or hinted at by Lord RCs Pink Beam, I think). All in all I’m not totally sure that there is a definitive “critical” Dick edition out there that would hold true to “literary” standards, or is there (LoA would be, but for The Unteleported Man/Lies or The Screenplay there may still be open questions)? I’m not really an anglist (or germanist), but I feel that this type of ground work is needed for academical work. Is this something that could be promoted by an agent?