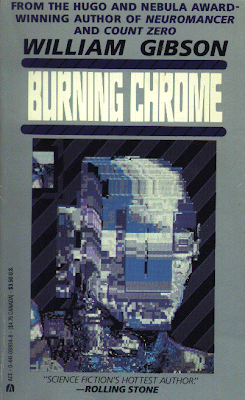 It's been more than a little while since I've updated the blog. Anyone still listening? Here are my excuses: first we had that baby, then, from the baby, I caught hand, foot, and mouth disease which resulted in painful blisters on my hands and feet. Don't feel too sorry for me; I got about four days off from changing diapers.

I need to admit something else. I've been cheating on PKD, researching mystery author Dashiell Hammett's life and work. Now I'm not going to create a blog about him or anything (!), but he is an interesting author who writes very much with the same simple and efficient prose as PKD. I remember reading somewhere that Dick called the Millenium Falcon from Star Wars the Maltese Falcon, so I think it's a pretty safe bet that Dick read Hammett. The Crack in Space even has a kind of Spade-like detective, albeit with pyloric spasms.

I also am just finishing teaching Gibson's short story "Burning Chrome" in my Literature class. The story was published in Omni in 1983 so Dick probably never read it, which is a shame because he would have dug it. I was especially struck by this line from the story: "...Bobby was already there, leaning forward to drive the Russian program into its slot with the heel of his hand. He did it with the tight grace of a kid slamming change into an arcade game, sure of winning and ready to pull down a string of free games." What struck me was how this line, which connects civil disobedience and hacking to adolescent reverie, reminds me of Dick's 1972 "The Android and Human" essay in which he states: ...there are kids now who can't be unplugged because no electrical power cord links them to any external power source. Their hearts beat with an interior, private meaning. Their energy doesn't come from a pacemaker; it comes from a stubborn, almost absurdly perverse refusal to be 'shucked'; that is to be taken in by the slogans, the ideology -- in fact, by any and all ideology itself of whatever sort -- that would reduce them to instruments of abstract causes, however "good." Back in California, where I came from, I have been living with such kids, participating, to the extent I can, in their emerging world. I would like to tell you about their world because -- if we are lucky -- something of that world, those values, that way of life, will shape the future of our total society, our utopia, or anti-utopia of the future" (188).

Previous technologies, weapons and surveillance systems have added to the power of the Government (the 'man,' if you will). Dick saw that at some point technology might emerge that would allow for subversion of the dominant, authoritarian power structures. Kids might become so versed in technology that they could 'play' in a virtual world, while at the same time righting the wrongs and injustices of the world by short-circuiting any system that requires submission through intimidation, misinformation, or apathy.

What you encounter in "Burning Chrome" is young people growing up so naturally in a technological world that in their 'play' they are capable of destroying the power structures designed to keep them down. Of course Gibson's future is dystopic as hell, except insofar as he suggests that technology will not supplant our inborn instincts, but, at some date we've yet to reach, will help us engage in our behavior at its most human (of course it wouldn't be interesting if Gibson didn't complicate the theme by suggesting we pay a steep psychological price for the combination of technology and cheap consumerism). I wonder what he'd think of Gibson's style, which is certainly more poetic and figurative than his own. What would Dashiell Hammett think if he saw Gibson's blending of SF and Noir?
Posted by Ragle Gumm at 3:29 PM

Tony,
That's an easy one: The Maltese Falcon.

Remember that in the intro to PKD's letters for the year 1974, William Gibson recalls how PKD swept through the Vancouver sf community at the start of his writing career. And how it affected him ("the product of one single soul's passage through savagely lonely country" he describes the letters.)

Elsewhere Gibson has explained that he got the idea for cyberspace (a term he coined, though not the concept)watching a kid play video games in the arcade, completely plugged in and unaware of his physical surroundings.

great post as ever Dave. don't worry, your readers understand about the responsibilities of kids and detective stories. the comparison of noir to PKD's darker "proto-cyberpunk" stuff is an interesting one. I don't find Dick's prose to be all that hardboiled, except maybe his "paranoid criticism" is "hardboiled" in some sense.

Hmm, yet to read any Gibson-I'm just a bit put off by cyberpunk-its too 'now' for me, not exciting enough a concept(altho it certainly would have been back in the 80s!)
Good luck with the kids-they certainly tie up your time!

I've been waiting, patiently or other wise.
Wm Gibson is a great writer!

Gibson's "Neuromancer" is a fantastic book.

That's hilarious TDH, I've just started on a hardcore Hammet kick myself! (And I swear I'm not being facetious this time...) I read "The Thin Man," about a month ago and it set me off... Probably gonna read all of him (not so prolific unfortunately.)

How about another blog called "Total Hammet Head!"

OK, I admit, my joking suggestion that you start a "Total Hammet Head" blog was written before I'd read your whole post, indeed before having even read the next sentence (wherein you jokingly disavow such a possibility)... I commented impulsively and prematurely because I was so excited that you were also somehow trailing from Philip K. Dick to Dasheill Hammet, just as I was (plus I was checking my computer between two classes, too)... But there are indeed fruitful cross pollinations to be plumbed, and not in some stupid "genre studies" kind of way...

As for William Gibson, I have owned a copy of Neuromancer for several years. For some reason it lives atop my toilet (a forgotten late night impulse, I imagine...) Perhaps I should rescue it from its cogent but disgraceful perch and read it soon.

Hammet is a great writer, too -- it's a sin to stick authors into genres and ban them from the mainstream

@ pete: totally! pull that off the back of the toilet and give it a shot. i think it was a new direction for specfic, scifi etc. and there are some really great parts in that book that stay with you. the whole space dub description in orbit is still stamped on my memory. his later stuff is even better imo. it has a lot more little details about social otaku and less romantic treatment with said obsessions.

Tony Libido: The perfect starting point for Hammett is his first novel, "Red Harvest." It has the most perfect opening paragraph of any noir novel I've read, and goes on to establish its setting and viewpoint character with utterly ruthless economy.

Dave: Congratulations on your new arrival. As much as we both admire Hammett and Gibson (and PKD), I think the better comparison with Gibson would be Raymond Chandler. There's a vein of wounded romanticism running through "Neuromancer" that's a lot closer to "The Big Sleep" and "Farewell My Lovely" than anything in Hammett's slender portfolio.