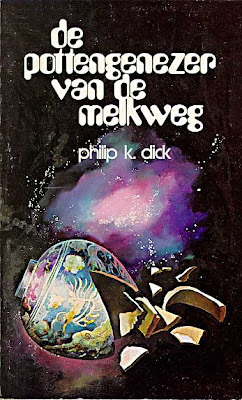 After a short road trip with the band to SoCal, I'm back at my copy of Galactic Pot-Healer. In fact I'm only 30 pages from the end. I was a little overwhelmed thinking about how I would write about this book. It's kinda 'floopy' -- sort of elastic and weird. Critically speaking, it's a slippery critter to cage.

Luckily, today in the mail I received (no not an invitation to raise an ancient and mysterious cathedral on a distant planet) but rather a sample copy of Rickels's I Think I Am: Philip K Dick which features a whole chapter on GPH. It may take me some time to digest it, but it looks to be good stuff. And perhaps he will help me corral these elusive thematics.

I'd also like to point to Mr Hand's comments for the previous post. He got me thinking about how the Mare Nostrum represents more than just the Freudian or Jungian unconscious, but rather seems to represent a field of experience outside our normal reality. In the dark ocean all things seem to conform to an opaque and unknowable logic. All the elements related to the Glimmung and Plowman's planet, the sacred books, the shards of pottery with pictographs, the messages from the Glimmung, ring with an air of certainty, but unfortunately, they are almost instantaneously contradicted by some other equally certain divine proclamation.

Joe Fernwright, by leaving his mundane life, is forced to operate in this state of extreme uncertainty. What he substitutes for routine is an unceasing questioning of the Universe and his own place in it. He confronts death, in the form of his own rotting, submerged, and of course talking corpse. He confronts both the Glimmung and the anti-Glimmung; this opposition suggests that one of the entities is good and the other is evil, which in turn may suggest that these are only these two spiritual forces which permeate the Universe.

What's important is that every effort Joe makes to understand what is happening around him fails, and I think all efforts to understand this unknowable field of experience are doomed to fail.

I'm also struck by how GPH reads as prescient autobiography for PKD who can be seen as our lunch-pail hero, called by the Pink Light in 1974 to a higher purpose, asked to make sense of the nonsensical. Horselover Fat, often in VALIS, interprets his 'mystical experiences' as a call to action, and yet what I suspect we will learn when a larger culling of the Exegesis is finally available is that all of Dick's visions, all of these calls to action, were unresolvable, an insistent prodding towards some act of unification, by which what is fragmented will be made whole. Think Sisyphus, but instead of a obeying a punishment for some crime, the guy pushes the rock up the hill because obscure signs (of divine origin??) on the side of the path suggest it's the right thing to do. You'd certainly read the signs differently the second time up the hill wouldn't you?
Posted by Ragle Gumm at 8:01 PM

I'm with you on the "prescient autobiography" thing. Couldn't have put it better myself. One of the interesting things that PKD does in the letters and exegesis is to go back and retroactively read his pre-VALIS experience novels in the light of his theories, looking for coded information or allegories he wouldn't have known he was writing at the time, or retconning his own work. As a longtime follower of the biography and experiences as well as the novels, I've enjoyed the game of reading the novels both in terms of how they stand on their own, and how they can be esoterically read in light of this problematic project of discovering "the theology of PKD" or at least some kind of pragmatic material for jokes about doing one's own mystical project. GPH is certainly one of the most obvious, and perhaps one of his best novels about the existential angst experienced by somebody who questions an ambiguous divine call. Maybe in this light comparison to Kierkegaard (who's often better than referencing Kafka or Borges when treating elements of Dick's Serious Literary Style) is apt here. It's not the weirdness of the divine call that's at issue, although it provides some of the special effects and delightful images. Rather it's the way the GPH thinks and feels about his new boss experience that matters. The insight this provides as a psychological novel is immediately recognizable to anybody what's had weird "contact" experiences of their own. In that regard GPH is a great PKD novel for talking about with other contactees, marin county new agers, aficionados of mindfuck religious experience, psychedelic heads, or what have you. The meaning of the novel is to be found in what all the weirdos who love it recognize in the strange mirror of the murky depths of that post-Jungian underwater cathedral.

I just wrote a huge comment and now I fear it may be lost as when I clicked "publish" after entering my sign-in details, I got a 404 error. :(

I will come back a later stage if my comment hasn't been posted to try to remember it, but for now I am too annoyed.

"Think Sisyphus, but instead of a obeying a punishment for some crime, the guy pushes the rock up the hill because obscure signs (of divine origin??) on the side of the path suggest it's the right thing to do. You'd certainly read the signs differently the second time up the hill wouldn't you?"

In the PKD universe there is no Sisyphus, but there is Wilbur Mercer. He walks endlessly up a hill in a wasteland, pelted by rocks from unknown assailants. This is not a part in a tragedy but rather a recognition of the human condition and an invitation to empathy.

Robin, I use exactly that analogy when I teach DADOES?

But I disagree; in the PKD universe we are ALL Sisyphus!