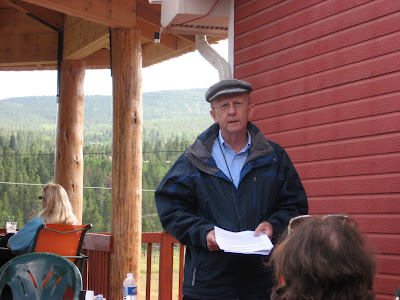 I'm pleased to be able to publish here, for you Dick-heads, the paper John Fairchild presented at the Philip K Dick Festival earlier this month in Colorado. John had to give this talk outside on the gazebo instead of in the comfort of the library, and I know I had trouble hearing him at times over the roar of passing biker gangs, so I'm glad to be able to read this at my leisure. John has been involved with the PKD scene since the newsletter days and transcribed a number of the letters in the most recent edition of PKD's Selected Letters 1980-82. This is dense stuff and Mr Fairchild does us all a real service by breaking it down for us... There are seven parts to this essay and I'm going to post them one at a time, because I need to stretch out this wonderful free content while I busy myself with the first weeks of the Fall semester, and because I know if I publish something too long you guys won't read it. Now, without further ado,

Sentient Gravity
A talk on The Selected Letters of Philip K. Dick 1980-1982

The Selected Letters of Philip K. Dick 1980-1982 is the sixth and last volume of the Selected Letters. We’re going to be touching on just a few aspects of this last volume. We’re going to be looking mainly at the letters to Patricia Warrick. At the time, Patricia Warrick was a Professor of English at the Univ. of Wisconsin. Her major book on Phil is Mind in Motion, The Fiction of Philip K. Dick, 1987.

I’d like to start off with just one definition. Most of you are familiar with VALIS; Vast Active Living Intelligence System. Phil had a change in preferred nomenclature during this period. He preferred to talk about the macrometasomakosmos. The macrometasomakosmos is VALIS, the Logos, the Cosmic Christ, Plato’s Forms, and Pythagoras’ kosmos.

I The role of Dialectic

Dialectic comes up many times in this last volume, often in ways that are not immediately recognized. We usually think of dialectic in terms of Hegel— thesis, antithesis, and synthesis creating a new thesis. This will show up as a model of how information gets arranged conceptually in the universe. However, there are numerous examples of more complex concepts that take dialectic as their basis. Some of these are hierogamy, enantiodromia, and homeostasis—these are all related.

(1) Hierogamy: Greek; “holy marriage.” These were symbolic rituals where human participants represented a god and goddess. It is the harmonization of opposites. It shows up in Jungian psychology, per Phil. “And it is the psychological hierogamy, the unification of the opposites in the collective unconscious, that produces psychological wholeness, according to Jung.” (p. 38) (All page numbers here are from the Letters.)

(2) Enantiodromia: Greek; the process by which something becomes its opposite, and the subsequent interaction between the two. “…(E)nantiodromia is the primary instrument by which the structure of the macrometasomakosmos is achieved and preserved.” (p.66)

(3) Homeostasis is the self-regulating process by which biological systems tend to maintain stability while adjusting to conditions that are optimal for survival. Homeostatic responses can be observed in all levels of life—atom, molecule, cell, organ, organism, population, and community—and in a wide range of time intervals—from a fraction of a second… to hundreds of years for community changes. (Encyclopaedia Britannica, hereafter referred to as EB.) Phil says the macrometasomakosmos self-corrects to its own map. (p. 132) Phil’s use of the term dialectic relies more on fusion than building on contradiction. His dialectic usually consists of A reaching the highest state it can reach, then B growing or leaping out of A yet containing the best of A. From there, C makes a quantum leap and supersedes A and B yet is still a fusion of the two.

Nice start. I'm certainly tantalized. And I applaud the decision to focus on dialectic. Makes me want to know more about Dick's reading of Plato.

I have the paper and just love this summary of the final letters, as well as the insight into the funky phildickian terms. Take the macrometasomakosmos, for instance. Once you break the macro meta soma kosmos apart, it actually makes sense!

John's remarks are very well considered and I applaud posting them for all PKDers to enjoy. Thanks to both of you!

Hey, I'm a huge PKD fan, and was delighted to discover this blog! This paper was extremely interesting to me, and going down your previous blog posts, I can see that I've finally met someone whose knowledge of PKD far exceeds my own. I was wondering if you could discuss Now Wait For Last Year. This is a PKD that I feel is extremely underrated, not considered by general SF fanatics and PKD fans to be up there in the ranks of Androids, High Castle, UBIK, VALIS, Three Stigmata, or Scanner Darkly. In my opinion, it's better than Three Stigmata and Scanner Darkly, and possibly UBIK. I feel that it doesn't get enough attention as a legitimate PKD masterpiece. Your thoughts?