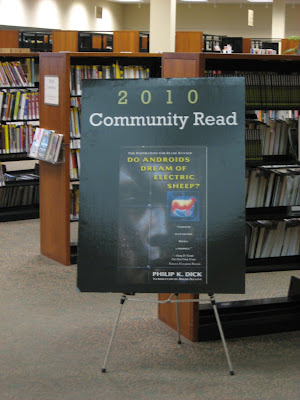 The last few weeks have been running me ragged. I'm teaching a couple new classes this semester that require a lot of prep time, the band has been busy - we even played the clubhouse of an East Bay biker gang - so it's been kinda crazy. I went to Ithaca and gave a talk at the Tompkins County Library about Do Androids Dream of Electric Sheep? to a dozen and a half geriatric library patrons, many of whom didn't particularly like the book. It was actually quite a bit of fun. I met some super nice folks: the librarians who shepherded me around, wining and dining me, a couple nice people from Cornell. The pay was so good, the hotel so nice, it seemed otherworldly. Can you imagine these librarians presenting the board with their plan to bring a 'famous blogger' who writes something called the 'Total Dick-Head' to talk about DADOES? 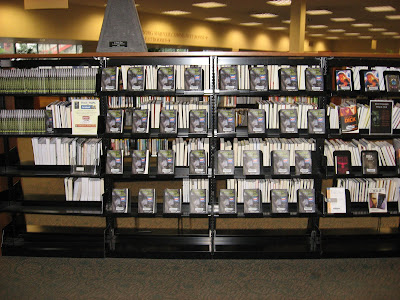 The library selected the book in conjunction with Cornell University's assignment of the book as the freshmen read. It was a pretty big deal. The university created a really cool blog, there were lectures offered on the first day of school (these are now available as videos here), Gabriel Mckee put together an exhibit of different editions of the novel, and Del Rey published a special edition of the book. I got a whole bunch of swag too: a t-shirt, poster, bookmarks. Perhaps a contest is in order.

Anyhoo, it was a blast but I've been struggling to catch up with work and the blog and the band and the family. There's plenty afoot in the Dickian realm and I hope to get a chance to do a roundup soon.
Posted by Ragle Gumm at 9:32 PM

I'd like to note, if I may, that the online version of my Cornell DADOES exhibit can be seen here:
http://rmc.library.cornell.edu/androids/exhibition/introduction/index.html