Who Is Marjorie Morningstar? 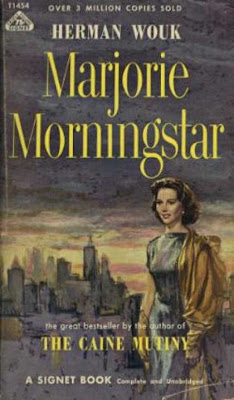 Returning to posts about We Can Build You, I just have a couple minutes today to talk about Marjorie Morningstar. I, for one, had never heard of the book, but it appears it was quite a hit when it was published in 1955. Dick writes:

"But Maury did not care about Bundy; he was still thinking only about his daughter. "I'll tell you what wrecked her," he said. "That goddam book Marjorie Morningstar."
"Why?" I said. It was terrible to see Maury slipping away like this, into these random, pointless expostulations. It resembled senility. The shock had been that great.
"That book," Maury said, "gave Pris the idea she could meet someone rich and famous and handsome. Like you know who. Like Sam K. Barrows. It's an old-country idea about marriage. Cold-blooded, marrying because it's to your advantage. The kids in this country marry for love, and maybe that's sappy, but at least it's not calculating. When she read that book she began to get calculating about love. The only thing that could have saved Pris--if she had fallen head over heels in love with some boy. And now she's gone." His voice broke. "Let's face it; this isn't a business only. I mean, it's a business all right. But not the simulacrum business. She wants to sell herself to him and get something back; you know what I mean, Louis." He shook his head, gazing at me hopelessly. "And he can give her what she wants. And she knows it."

"She starts off as Marjorie Morgenstern, the beautiful, energetic, spoiled 19-year-old daughter of a Jewish family barely bourgeois enough to keep up with her. Through 556 of the book's 565 pages, Wouk successfully evokes her inner life as she rebels against expectations. Marjorie outgrows everything from her past—her Bronx boyfriend, her Jewish surname, even her mother's traditionalist messages about sex: "the strongest assault on her old convictions came from a most unexpected quarter: her own body." As she matures, she shakes off emotional and intellectual baby fat, finding in their place the muscles to interact with the world on her own terms."

Apparently, you can also see the film Marjorie Morningstar with Gene Kelly and Natalie Wood, and the Salon article talks about a Pacino remake with Scarlett Johanssen as Marjorie - let's not hold our breath.

I think a far more insightful paragraph comes from some random internet column on reliving the past. They suggest reading some classic 50's literature:

"'Marjorie Morningstar,' 'Peyton Place,' 'No Time for Sergeants.' You've heard of these books, all best sellers during the 1950s, maybe seen the movies. But have you read them?

Nothing captures the '50s better than curling up with a Scotch and water and a good book. Something like Sloan Wilson's 'The Man in the Gray Flannel Suit,' a best seller in 1955, a film starring Gregory Peck in 1956, then forgotten -- until it was reissued in 2002.

"I must keep my suit neatly pressed like anyone else," the hero avers, "for I am a very respectable young man."

The novel is not, despite what its title might suggest, a mere cri de coeur against corporate conformity. It's about love, marriage, and the effect of World War II on a troubled veteran and on a troubled marriage. And it's about how husband and wife try to develop their own little suburban tract, with houses that are "modern, very low to preserve the view, with big windows overlooking the sound..."

Perhaps nothing in the book evokes the '50s more, however, than Wilson's slightly cynical yet almost paradisiacal portrait of a small Connecticut town whose residents know each other all too well""

Kleo Mini told me that The Man in the Gray Flannel Suit was a big influence on PKD. Others have suggested Dick was inspired to the write the multi-foci plot of The Man in the High Castle by the similar structure of Peyton Place. It's becoming clear to me that Dick read widely from his contemporary mainstream fiction of his time, and this is just more evidence of the literary stuff Dick was trying in the early 60s: combining elements from contemporary fiction with science fictional settings. It's good to know that both Marjorie Morningstar and The Man in the Gray Flannal Suit are available on video. I think I'll add them to my Netflix queue.
Posted by Ragle Gumm at 12:38 PM

Fabulous efforts of research into a less-glamorous but still hugely important area in PKD studies. Thanks as always Dave for your excellent work!

Hey, David, this is a big ad for my book... where I have discussed Marjorie and the Grey-Flannel-clad man... I agree with you, that's the stuff Dick would have liked to write and publish, that's his idea of a serious writer--not the Great Artist, but the successful and best-selling Pro! Though I suspect that he believed you could be both best-selling and artistic--and this explains why his non-sf could not sell! (At least, according to publishers... who didn't buy it.)

However, I have read Sloan and that's a novel that I do recommend... if you have read Dick's non-sf stuff, it's sort of enlightening. But I'd also recommend you the man who managed to get published writing Dick non-sf stuff: Richard Yates! Try Revolutionary Road and tell me if it doesn't often read like Dick--though books like Puttering and The Man Whose Teeth are ultimately more interesting.

Hey, just wanted to say that I love your blog. I haven't been on it in a while, so when I checked it today I was very happily surprised to see that you read We Can Build You! I just read it over Winter break! (I also read The Simulacra, because you did.) Keep up the great work.

Finished the Anne R. Dick book, very well done. It is nice to see how far we have gotten. Wonder what PKD would say about our nation today. Maybe he told us?