My Future Has Been Adjusted 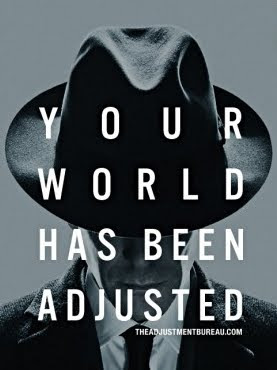 I would like to start this post (which will ultimately be a review of Adjustment Bureau) with a small confession. Even before I started this blog almost four years ago, my dream was to find work in Hollywood as a Dickian dramaturge, a PKD expert who helps movie producers keep their adaptations of his work true to the source material. It's a fairly common job among scholars of Shakespeare.

It was 2007 - a heady time. I was still riding high on the release of A Scanner Darkly (which my buddy Erik Davis consulted on) and as I started my job as an English teacher with my newly acquired Master's Degree, the idea of flying off to Cannes and hobnobbing with Brad Pitt as I explained the importance off looking defeated when he played the role of Jason Taverner was a nice fantasy. Admittedly, this was more than a bit naive, but, if we're being honest here, it was a dream I was trying to achieve with this blog.

And it was a dream that died about 18 minutes into The Adjustment Bureau on Friday night. The death of my dream was no surprise, as it had been on life support for a long time. And it wasn't a bummer or anything. I simply realized the dream job of keeping big-money PKD adaptations faithful to his source material is like warm ice or dry water, an oxymoronic impossibility. So, don't be sad. As Kris Kristofferson once wrote, "Freedom's just another word for nothing left to lose" and now I'm free.

First things first. The Adjustment Bureau is not a PKD adaptation. As I noted before, the central premise of a secret organization dedicated to keeping mankind on a preferred timeline is at the crux of Isaac Asimov's Foundation Series, which were pretty much the first SF books I ever read. After reading PKD's short story (which as previously noted appeared a year or so after the first book in the Foundation series) I feel like PKD lifted the concept from Asimov and employed it brilliantly to create on of his greatest 'gubble' moments, when reality appears to dissolve before a character's very eyes - they suffer the symptoms of schizophrenia, the withdrawal and subsequent 'tomb world' imagery, while in full control of their mental faculties.

As was done in Next, Dick's original short story was strip-mined for its science fictional idea and then discarded. Producers took that nice little idea and transplanted it into a feature length film, but the end result is about as Dickian as a spring wedding (a prize will be awarded if anybody can find me a marriage scene in Dick's irv). The fact is, no big-money Hollywood adaptation can ever be truly faithful to the source material, mostly because Hollywood is a place where illusions are constructed, a place that is itself an illusion, a place that frankly wouldn't know 'reality' if it were to bite it in the ass -a place so hopelessly dedicated to creating high-priced and profit-driven fantasies that it has no ability to tell us what is real. Hollywood, by its very makeup, is too inauthentic to capture the great humanism that marks authenticity in Dick's books.

Matt Damon's character, David Norris, is running for a senate seat when we first meet him. In Dick's story Ed Fletcher is a real estate agent. The protagonist's elevation in stature is important - at least to me. You see if he were just an everyday guy, then the story's paranoiac elements become more pronounced. Paranoia involves an exaggerated sense of self-importance. If they're all out to get you, it is logical to assume that you are very powerful and important. If the main character is already a famous, super-scientist or running for senate with presidential aspirations, then he's already self-important. To make Damon's character a big shot, is to tweak the fundamental formula at the core of Dick's work. His characters are always everyday people, put upon by the world. Any two paragraph summary of Dick's significance in Science Fiction should include his use of average Joes and Joans. So while I understand the change, the filmmakers should have been warned they were meddling with the forces of nature.

Oh man, this is getting too long. Nobody's gonna read it and if they do they'll think I'm ranting.

I kind of liked watching the movie and imagining the action was entirely internal to Norris' psyche. Regular reader, Mr Hand, who saw the film with me, thinks this is what Rickels means by endopsychic allegory, but who the hell knows what Rickels means. Anyway, I liked the idea that the bureau was Norris' super-ego and his love for whatshername was his id. Then you have this nice internal struggle. And actually, this interpretation is plausible for like three seconds near the end of the movie, but then they go in a different direction (I'm going to write up a separate post with spoilers to talk more specifically about the ending).

I liked my idea; that the story should have been entirely solipsistic, existing in Norris' mind. And here's where my really important realization arrived. My desire to work as a dramaturge was, at its heart, an artistic aspiration. I'm realizing I should be writing my own stuff, which I have been doing, a bit. It's one of the reasons my posts here are have tapered off. I need to do more of that. Not that I'd turn him down if Gondry offered me a gig advising on the upcoming Ubik adaptation. And this blog isn't going anywhere either. I'm even more dedicated to studying Dick's life and work as he's my biggest influence.

Before you go, here's some chart-based evidence supporting the assertion that no good PKD adaption will be liked and no well-liked adaptation will be good: 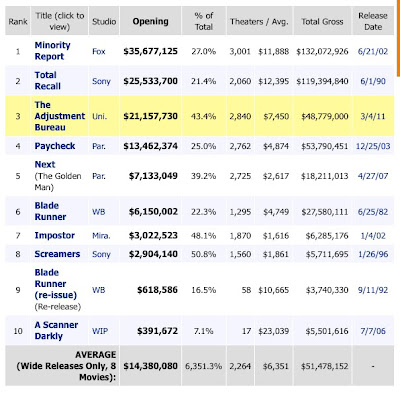 My main disappointment with The Adjustment Bureau was that it ditched the philosophical speculation and subtleties of Dick's work to make a thriller that just did not thrill.
At least when Spielberg simplified Minority Report for a mass audience he made a genuinely exciting movie.
The Adjustment Bureau ended up trying to do what The Matrix and Dark City have already done much more intelligently (!) and excitingly. The only difference between Adjustment Bureau and those films is that it substitutes their film noir-palette for the bright colours of daytime-NYC which just served to further the illusion that you had just mistakenly wandered into a romantic comedy.
[apologies if this is a double-post]

Simply thinking actively about Dick, subjects addressed by Dick, and subjects adjacent to Dick generates more creative and fruitful material than most original writing does. But Dick also seems to provide a unique kind of influence of writers - one smart tweak of a central theme (like your Jung-ey solipsist confrontation idea - shades of GPH?)can produce an idea that is somehow a riff and yet not overly derivative. I think that's partially because he was so involved in the dialogue aspect of science fiction - an aspect that keeps non-SF readers confused by so much of his approach. It's also because he's simply the most stimulating writer around. I guess I have no conclusion here, except: from one Dick-head aspiring writer to another, keep on keepin' on. And if anyone gets to consult on the man's works, it should and probably would probably be you at this point.

Tragic isn't it; i'm sure that list is upside down. Or should be. The most faithful adaptation you can currently get at the bottom? That's just not cricket. meh. I look forward to the 4 part man in the high castle BBC thing and see if that does something right.

Hopefully the plethora of films will get people into reading the stories. That's the most positive thing I can find to say about most of these films. Then everyone will become fed up of PKD (if they're not already) and the second-hand prices for some of his books might come down. There's always hope.

It is interesting. Personally, I find a movie like MICHAEL CLAYTON to be more like a PK Dick movie than many of the movies actually based on Dick stories and novels. Except A SCANNER DARKLY, of course.

For me, ADJUSTMENT BUREAU would've been much more interesting if, as you point out, it had been far less overtly fantastic.

In MICHAEL CLAYTON, there is the implication that something unexplainable is going on. That Arthur Eden, Clayton and Clayton's son, Henry, are all traveling through a pathway of alternate realities that converge in the boy's series of books.

It's probably something more like Jonathan Lethem than Dick, but Dick's where Lethem got much of his style. But it is a mistake to label PK Dick a "high concept" writer as Hollywood seems to do. By emphasizing the concept to the exclusion of the actual story, they fail to understand his writing beyond the superficial.

hated this film. Heard someone describing it as "The Matrix with a Hallmark twist." Think that hits the nail on the head.

Evelyn Waugh said, many years ago, that Hollywood selects a book for filming because it "has had some individual quality, good or bad, that has made it remarkable. It is the work of a staff of 'writers' to distinguish this quality, separate it and obliterate it. We all known frightful examples of books we have seen thus sterilised."

It is changing the subject a bit, but I'd like to see a response to this: http://www.cracked.com/article_19106_5-ways-phillip-k-dicks-insanity-changed-world-movies.html

You forget this film... I know it's french (but french guys were the first to give some love to PKD) but it's a really good adaptation (and yes it's an adaptation not a rebuilding by Hollywood):
"Confessions d'un Barjo"

I finally saw this last night and it was a lot sillier than I expected. The Adjustment Bureaucrats really suck at their jobs. It's funny though, the first 18 minutes were the most Dickian for me, but for all the wrong reasons - the merging of reality and fantasy with the appearance of Madelaine Albright, John Stewart, etc. making an appearance in this work of fiction. I found this more unseemly than a comedy like "Dave," maybe because the blurred line between politics and entertaiment is so much more pronounced.