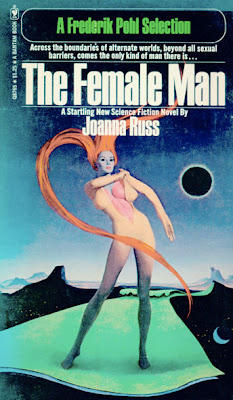 Unless you follow the world of feminist science fiction academia closely, you may not have already heard that author and critic Joanna Russ passed away last week after suffering a series of strokes (sound familiar?). Her relevance to the life and work of PKD is limited (at least here in this post) to her absolute hatred of Dick's anti-abortion story "The Pre-Persons." Dick writes in the story's notes:

"In this ... I incurred the absolute hate of Joanna Russ who wrote me the nastiest letter I've ever received; at one point she said she usually offered to beat up people (she didn't use the word 'people') who expressed opinions such as this. I admit that this story amounts to special pleading, and I'm sorry to offend those who disagree with me about abortion on demand. I also got some unsigned hate mail, some of it not from individuals but from organizations promoting abortion on demand. Well, I have always managed to offend people by what I write. Drugs, communism, and now an anti-abortion stand; I really know how to get myself in hot water. Sorry, people. But for the pre-persons' sake I am not sorry. I stand where I stand: "Hier steh Ich; Ich kann nicht anders," ["Here I stand, I can do no other"] as Martin Luther is supposed to have said."

Recently a commenter asked if we've ever discussed "The Pre-Persons" here. Nope. But the story, PKD's response to the Roe v Wade verdict, certainly caused some controversy. I don't have time to get too in depth about this right now as I'm finishing the semester buried under a mountain of papers. But I will say that Dick's pro-life attitude in his fiction is perhaps as consistent a theme as his oft-repeated interest in "what is real" and "what is human."

One of the more interesting references to abortion is in The Crack in Space. Protag Tito Cravelli's ex-wife is an abortion consultant (or something - this aspect of the plot is missing from all the online novel summaries) and she is pretty cold-hearted.

I think it's a pretty safe bet that PKD's reverence for the unborn comes from his grief and guilt relating to the death of his twin-sister, Jane. But, as I was saying earlier, the emphasis in his fiction on the sacredness of all life makes this aspect of his belief system pretty fitting - even if it's not the most progressive or politically correct view to hold nowadays. Additionally, I've always felt that Anne Dick's abortion (which she is remarkably honest about in her memoir) proved to be a turning point in their marriage. This fits with The Crack in Space which was written in 1964 in the middle of their difficult separation.

It was, in part, criticism of Dick's treatment of women in his fiction from women like Russ and Ursula LeGuin that prompted Dick to write in a letter to his agent Russ Galen, "My depiction of females has been inadequate and even somewhat vicious." (June 29, 1981).

In fact, it is this realization that may have spurred PKD to create the wonderful character of Angel Archer in The Transmigration of Timothy Archer. I think this helps show that Dick was, even in his later years, empathetic, and open to criticism, but more importantly, that he was willing to try to change aspects of his worldview as well as his writing. While you might disagree with Dick's opinion, you gotta admire the hell out of willingness to evolve.

While PKD's female characters were generally treated with certain levels of disdain. I attribute this more to the times that he was raised in.

In the early years that PKD lived, women were seen as submissive house cleaners and baby machines. While I do not agree with his depictions of women, I am not going to dislike his works based on this.

As for "The Pre-Persons", which I may add is one of my favourite PKD short stories, really touched on a rather scary possibility. While I am not entirely bothered by abortions. Late term abortions are an abhorrent practice, and PKD touched on this horrific aspect extremely well.

Just makes me appreciate him all the more.

Careful with that "generally". Actually there are intelresting female characters well before Angel Archer. As for "PP", I'd say it's more about Dick's relation with his own mother and his former wife Anne than a balanced attempt to express an opinion about a moral and social issue.

I had completely forgotten about The Man In The High Castle.Also worth mentioning could be Pris from We Can Build you. I do stand corrected :)

And for an early PKD reference: Barbara in "Gather Yourselves Together" was, at the very least, an independent woman; especially when considering it's set in 1949.

Joanna Russ's "The Female Man" is a classic. It's a challenging read because she deconstructs the subject so emphatically, but there's an important element that emerges from its exaggerated postmodernism: the human tendency to try to regroup, to pull together the varieties of human experience.

I think this tendency in her work is what links her to PKD. Dick didn't have the best characterizations of women, but they always felt like lived experiences. There's an antagonism between men and women in his work, but its hardly false. Iran (in "Androids") for example seems a bit shrewish, but only when seen through Deckard and the pressures to which he is subject. And he's the protagonist, so it seems valuable to see things from his perspective. The pressures are ultimately social pressures, not ontological qualities of individual people. (But this is from my vaguely Marxist reading of the novel as an exploration of labor and consumption).