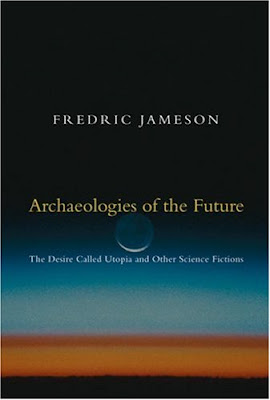 I copied this behemoth into blogger yesterday. When I hit 'publish' it was gone. So, here it is again...

"In such moments, Dick's work transcends the opposition between the subjective and the objective, and thereby confronts the dilemma which in one way or another characterizes all literature of any consequence: the intolerable and yet unavoidable choice between a literature of the self and a language of some impersonal exteriority, between the subjectivism of private languages and case histories and that nostalgia for the objective that leads outside the realm of the individual or existential experiences into some reassuringly stable place of common sense and statistics. Dick's force lies in the effort to retain possession and use of apparently contradictory, mutually exclusive subjective and objective explanation systems all at once. The casual attribution, then, of the hallucinatory experiences to drugs, to schizophrenia or to the half-life, is not so much a concession to the demands of the older kind of reading or explanation as it is a refusal of that first, now archaic solution of symbolism and modernism: the sheer fantasy and dream narrative. To attribute his nightmares to drugs, schizophrenia, or half-life is thus a way of affirming their reality and rescuing their intolerable experiences from being defused as an unthreatening surrealism; a way of preserving the resistance and the density of the subjective moment, of emphasizing the commitment of his work to this very alternation itself as its basic content. And this discontinuity is at one with our fragmented existence under capitalism; it dramatizes our simultaneous presence in separate compartments of private and public worlds, our twin condemnation to both history and psychology in scandalous concurrence." - Frederic Jameson, Archaeologies of the Future (350-351)

Correct me if I'm wrong, but I believe you can read the quote in context here.
Posted by Ragle Gumm at 2:54 PM

I used to be more sympathetic to this approach. It's understandable that Jameson wants to come up with a sophisticated approach. But I'm getting kinda weary of this "transcends subject/object" talk. Dick doesn't have some kinda clever epistemological higher ground that can be modeled with postmodernism. It can be put much simpler: he's confronting things that even the toughest postmodernists are terrified to tackle in less than gargantuan sentences. This nonsense about "not the old way" really makes Jameson look silly. It's precisely because Dick was so committed to the intellectual traditions that Jameson thinks he has "transcended" that Dick's writings were so powerful, not some subtle ironic stance.

Good for you, Mr. Hand. I couldn't have said it better, except for the last two words of the obfuscating quote: "scandalous occurrences," which is just what he has given us. It tells me a lot more about him that it does PKD.

There's certainly some insight in what Jameson is saying here. For instance in Do Androids Dream of Electric Sheep? there is a long examination of a character who starts out believing his work as a bounty hunter is objectively sensible and moral, and who slowly realizes that subjectively, what he's doing is wrong. Or look at VALIS, in which Horselover and Phil look to match up their subjective experience with what really happened, or what is possible.

Now where Jameson loses me is in his next point about chalking Dick's narratives up to drugs and schizophrenia. And I even think I've got that, since to ascribe Dick's weird situations to drugs or the crazy reduces the tension inherent in the fiction, as it resolves its underlying conflict between real and imagined.

Then to suggest that this tension is something that we experience under late Capitalism is interesting, but seems like kind of a long shot.

Thank you Mr. Gumm for trying to translate Jameson's ponderous obfuscation into English. But it really doesn't help much. I wonder if even he understands what he wrote.

I'm a Jameson fan and a Dick fan, and it gives me great pleasure that Jameson at times writes about science fiction. (Without remembering the context) I find myself agreeing with Jameson's point. I don't think he believes that Dick "transcends" the subject/object problem in a philosophical sense, but he does so in a literary sense. I think he's just saying that Dick doesn't rely on an objective truth in his narratives (like a detective story), but likewise isn't completely subjective (like surrealism). Human experience is an admixture and constant struggle between the two.

I agree with Mr. Hand that Dick was committed to prior intellectual traditions, but for me the value of reading Dick's novels is in the complex interplay that Jameson describes. Dick doubled back on every philosophy he ever tracked through the darkness. He couldn't espouse a truth -- because he was busy in the activity of the encounter.

And thank you, as well, Mr. Lind for attempting to translate Professor Fredric Jameson's "ponderous" obfuscation into American Standard English.

But my follow up question would be, if you, Mr. Hand, and Mr. Gumm are able to summarize it in simplified English, WHY couldn't it have been written that way to begin with?

I realize he is William A. Lane Jr. Professor of Comparative Literature at Duke University (email is: jameson@duke.edu), won the 2008 Holberg Prize, and has written some spiffy essays about PKD, but just who is he trying to impress with that quote? Other "academic stars?"

Frank, thanks for your comments, as well. I'm not really sure why Jameson writes the way he does. Academic one-up-manship is probably part of it. He's read way too much French and German theory, as well, which can't be good for him. :)

I remember a professor of mine from George Mason University went to Duke as a graduate student, and he said that Jameson dictates his essays to a secretary. That might account for his style, which seems to include all sorts of parenthetical phrases that qualify phrases within other phrases. At any rate, Jameson's ideas about postmodernism have influenced me a great deal.