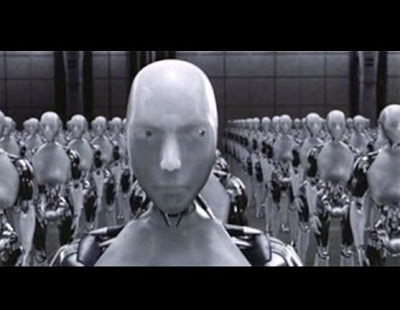 Just finished reading Umberto's chapter on We Can Build You and Do Androids Dream of Electric Sheep?. It's a great chapter with lots of insight, and Rossi gets a lot of mileage by comparing the two novels. I also know it's one of Umberto's favorite chapters. Anyway, it got me thinking.

"[In Do Androids] Dick had to contrast [wife] Nancy (the authentic human being) with people like his parents, his distant father and his cold mother (metaphorically androids, reflex machines). This often leads to those analyses which, like Robinson's short but effective discussion, show that in Do Androids Dream of Electric Sheep? beside the Humane Humans (such as John R. Isidore) there are Cruel Androids (Roy Baty, his wife Irmagard, Pris Stratton), but also Cruel Humans" (162)

I'm not sure I agree that Roy and Irmagard are "cruel" or, more precisely, I think they are more than just cruel. For example when Irmagard is killed, Roy lets out a "cry of anguish." To these catagories laid out above, I would like to add that of the Empathetic Android. Now, this is not to say Humane Android, or anything like that, but in it's clear that for Dick androids are a grey area. For my money, the most striking bit of empathy in all of Do Androids Dream of Electric Sheep? is Rachel's decision to kill Deckard's goat, because she knows that will wound him the most, and she derives this knowledge from putting herself in Deckard's shoes. Rickels points that the Nazis put sirens on their bombers in order to scare the bejeezus out of their victims, again they gained this information by imagining themselves in that position, therefore empathy is not necessarily an altruistic trait, but can be used for good or ill.

Give me a moment to set up my second thought. Did you know the only coordinating conjunction used in the biblical book of Genesis is "and"? Can you imagine the bible saying something like, "And God said, let there be light, BUT...."? The entire book is put together in paratactic metonymies, long clauses joined by 'and,' because everything that happens is simply an addition to God's creation. Likewise, "and" is a grammatical unit that means in only one direction in a sentence. For example in the sentence - "I like coffee and my wife likes tea" - the word 'and' does nothing to change the meaning of the words preceeding it; it merely adds to them. Words like "however" and "although" cause the reader to reassess the words that precede them. They change the meaning of the sentence by altering the relationships between the words.

Consciousness which has been programmed can only react to reality, it cannot change the way it perceives reality, and because of this every action is taken as a kind of addition. If each action undertaken is reflective in the sense that it was triggered by a specific event in reality then it is really a reaction, a reflex. The doctor hits you with that mallet in the knee and your legs kick. These kinds of unthinking reactions can never allow the programmed consciousness a chance to decide how to react. They can only act in reaction. Their decisions and choices are additional to their situations, not transformational. Hence, their names, "andys."
Posted by Ragle Gumm at 7:03 PM