How Can It Be Copywrong When It Feels So Copyright? 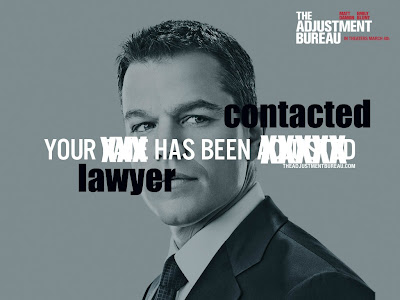 "In a lawsuit filed here Thursday, Mr. Dick’s estate charged Media Rights Capital and others involved with “The Adjustment Bureau,” which starred Matt Damon, with trying to avoid at least $500,000 in bonus payments by declaring Mr. Dick’s original story, “Adjustment Team,” to have been in the public domain. But, the suit says, they did so only after having repeatedly paid fees under purchase agreements for the story, and after tapping the Dick estate for promotional help."
Posted by Ragle Gumm at 11:34 PM

The story as reported yesterday at The Wrap (www.thewrap.com/movies/article/philip-k-dick-trust-sues-over-unpaid-adjustment-bureau-royalties-32263) has more detail including an image of the first page of the suit, showing that the plaintiff is in fact "Laura Archer Dick Coelho, as Trustee of the PKD Testamentary Trust." Her half-sister Isa Dick Hackett is an executive producer of The Adjustment Bureau, although that little detail isn't mentioned in either this or the NY Times story.

I can't really tell if this is seller's remorse, Hollywood greed, or some combination of both.

However, I'll say what I said on RFA's post about this. The movie is (at best) only loosely based on the story. A general overall theme, and character names...but that's about where it ends. And there are many movies that also follow a "similar theme" to a PKD story.

In the end, most likely the lawyers will be the only winners...they typically always are.