Another Weekly Amalgamation of PKD Reading (This week with Listening!) 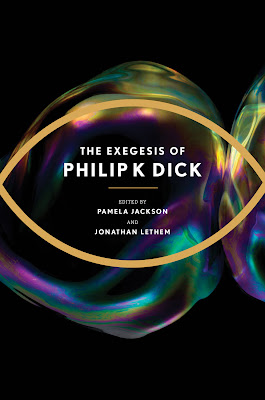 We have yet to hear even the rickety ignition sequence of Philip K Dick Article Machine, but I imagine it's coming out of mothballs this weekend with the release of The Exegesis last Tuesday. There are two reviews of the book at Amazon already, both of which are positive. Slate published a nice excerpt here. It's from earlier on in the text and is part of a letter.

Our own Mr Hand has already received his copy and is digging in over at his Philip K Dick and Religion blog.

Jonathan Lethem is out on tour in support of his pair of books released last week. Here's the New York Time's review of his collection of essays The Ecstasy of Influence. And here's Lethem on video talking about the Exegesis on video.

And here's a cool entry on PKD written by fellow Exegesis Annotator Gabriel Mckee over at freq.uenci.es... "a collaborative genealogy of spirituality."

Doug Mackey contacted me by email to say he's written up and posted a review of Ganymede Takeover on his book review blog Orbis Biblios.

Here's a blogger digging into some of the later stuff in the Exegesis, a very interesting set of themes about a dead king and a usurper that ties in Hamlet and the end of Flow My Tears.

I read here that they printed 100,000 copies of The Exegesis, whoa. 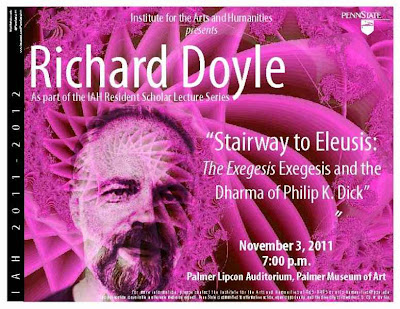 Annotator and Afterword author of The Exegesis, Rich Doyle posted his talk, Stairway to Eleusis, about PKD here.

The Science Channel is premiering a new series, Prophets of Science of Fiction, and one of the upcoming episodes is about Philip K Dick, and it looks, from the screengrab they are providing as a publicity still that Philip K Dick will be played by a re-purposed, animatronic Abraham Lincoln, with a cheap, fake beard. Don't believe me?:

Reader and blogger MDK is raising money via Kickstarter for a memoir. Check that out here.

Speaking of PKD coinkydinks (MDK has had a few) check out this blog entry I stumbled on about Dick's apartment in Wash - 35.

That ought to keep you busy for a couple of days. If you've got your copy (or even if you don't), head to the comments section to talk about it.

Great post, and thanks as always for the plug. Should we start a Kickstarter to try and convince the PKD Estate to publish the whole Exegesis as an ebook? Or handsomely printed multi-volume set? PKD had his Encyclopedia Brittanica...

Speaking of syncronicity, I was just this week writing about Wash-35, _Now Wait for Last Year_ and checking Sutin for confirmation of a connection. Nice to see someone else made the link 30 years earlier!

Thanks for the link; I was flipping through the Exegesis and that page stuck out to me, so I read it and found it so fascinating, I had to comment.

I'm expecting to write posts throughout my reading, as I think a few others will be. With 100,000 copies I think we will find many interesting pieces on him popping up on the net. I am curious to see all the different takes we get.

And to Mr. Hand -- it would be nice, wouldn't it, though I can expect it would be difficult to sort it all out. Of course, I think it is more likely than the Tolkien estate letting Tolkien's diaries be published.

Palmer, we imagined calling it Zebrapedia. Anonymous, I wrote an annotation about Wash 35 in The Exegesis (pg 59).

Thanks for the nod concerning the kickstarter project. I read your post shortly after you posted and totally missed my mention. I would like the PKD community to know, that I don't take my situation lightly. I'm somewhat different in that I didn't know of Phil prior to the synchronous event on 6-23-3002. I didn't know of his own mystical experiences. Then I began to have my own "anamnestic" experiences that were localized to two distinct moments in my life. At ages 12 and 15 I had two revelatory experiences. Summer of 86 (I was 12) I had a vision of myself in the TV as if one had a camcorder behind me at an angle. At 15 music gravitated from my cassette player to beneath my bed. It was the chorus to "This could be the night". I've had no other visions or "hallucinations" if you'd like to call them that, but a lot of fuzzy memories about some of Phil's books. And a lot of synchronicity and deja vu after 6-23-2002.

I'll probably order the Exegesis on Sunday. Not sure if I should, but it's possible my memoir could be incomplete without it.

I'm thrilled to see that somebody has already picked up on the Flow/king/Hamlet thing. When I was reading through that stuff I knew that some enterprising young grad student would find much grist for the Masters' dissertation mill there!

I like what Rich Doyle says in his talk about pain being something that's present in a lot of shamanic initiations. It's an important part of the explanation of Dick's Altered States experiences that doesn't get as much press as the drugs or mysticism. And I'd argue that our own David Gill is one of the sharpest scholars tuned in to the pain of PKD.

Henry, I think of the Jung Estate finally letting the Red Book get out, and I take heart. Hope I live to see the PKD Exegesis in full, with enough time to finish reading it.

Yes, I think there is a good possibility we will get much more of the Exegesis. I wouldn't be surprised, though, if some of it ends up not being published, if for no other reason, it would be too difficult to publish in any form.

Just finished watching the science channel episode. Kind of crappy, through the phil stand in with the fake beard made me laugh. BBC's Arena episode was much better.

I distinctly remember the press release a year ago stated that the Exegesis would be published in two volumes, with the second volume to be published a year from now. Anyone know if that's still the case? This one sure doesn't have "Vol. 1" on it anywhere...

I remember that initial press release, too, Christophe; but I wonder if they decided they could do it all in one volume? I don't know.

I just noticed the summary on the (c) page suggests we will get two volumes.

You are correct. Thanks Henry.