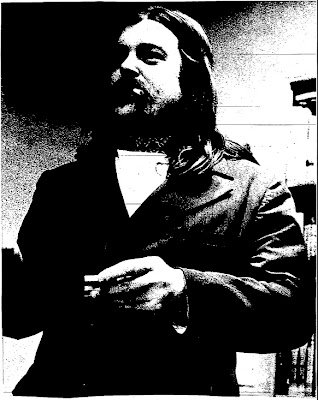 What follows is an email interview with Marc Haefele, an assistant editor at Doubleday and perhaps the only surviving editor of Dick’s work from the late 1960s and early 1970s conducted on 10/15/11. Haefele’s tenure at Doubleday coincided with Dick’s second great fertile period of the late 60s - imagine the manuscript for Ubik arriving on the set of Mad Men. Haefele also worked on Dick’s most famous novel Do Androids Dream of Electric Sheep?

How did you discover PKD's writing as a fan?

I read a lot of sf as an early teener. I first singled him out in a story he wrote for a briefly lived sf magazine called "Satellite" in mid 1955 (I was visiting in Grand Haven Michigan at the time). Oddly, I can't recall which story it was. Maybe "The Father Thing." The first book of his I bought was Eye in the Sky, a couple years later.

Such a book. Then I went after everything he wrote. I may have missed a couple of Ace double novels along the way.

Could you provide a short paragraph about yourself, summarizing your career, at least the aspect critical to your work with PKD?

In my last undergrad year at NYU--1965--I talked my way into a low -level PR-type job at Random House. A year later I was able (marvelous were those years) to ante this into a start-up editor job at Doubleday’s. Mostly on the basis of 15 years of devoted sf-reading, I was soon awarded the lion’s share of Doubleday’s sf list to handle. I was titled Assistant Editor. I worked for a guy called Larry Ashmead, who at that time was mostly devoting his time to Isaac Asimov and non-sf projects.

Can you explain your professional connection to PKD?

I started editing sf at Doubleday in 1967. Do Androids Dream was the first PKD I worked on. I was a bit obsessed with its quality and wanted it out of the genre. So I suggested a less sf-fy title The Electric Sheep. The result was the awkward title it now bears. It is of course a wonderful story, wonderfully told. Cutting Wilbur Mercer out of the movie was like cutting the whale out of Moby Dick. But I digress. I made a scant handful of suggestions, which Phil took to instantly.
(I ought to say here that as an sf editor, I experienced a kind of inverse square law of interaction with authors. The mediocrities never wanted your suggestions. The really good ones took them well, even if they didn’t quite agree with them. Phil always agreed with mine).

Then I worked on A Maze of Death. I’m glad Lethem has rediscovered this one for the world. It was so taut and sinister that I barely touched it. In some ways it is barely sf. I think of it as Phil’s Harold Pinter book. He came along about that time too, but I doubt Phil knew of him.

There are manuscripts that, when you take the top off the box and read the first paragraph (it has been said), you want to get up and put on your tux before you read the rest. So it was with Ubik. As soon as I read that first Ubik ad “spot”, I knew I was in for something tremendous. It was this book of his that most involved me as an editor. I still read with a bit of pride bits that I helped him with. Or with shame those I didn’t, to my chagrin. I’ll try to give you more detail on this another time. The book still lives in me, and I try to reread it every few years. I think it is Phil’s very best, but I am prejudiced.

The last book of his I had anything to do with was Flow My Tears, the Policeman Said. I signed off on the acquisition and passed it on to a younger colleague. The Wikipedia biblio says Phil finished it in 1970, but that’s not right. What we went for that year was about a 4-page outline and a memorable anecdote--the one about the rabbit that thought it was a cat. I believe we plunked down half up front, at least, for this--$5,000 would have been the total.

But here something changed about Phil and us. Previously, as I recall, Phil sent us perfectly typed complete ms., which we approved and bought for the full amount (I have only suggested here the total professionalism I experienced working with Phil). “Flow” was slow in getting to us--around 4 years. I was long gone by then. In the 1970 pb Our Friends From Frolix 8, there is toward the end of the book (which I didn't read until the `80s) a character called General Hefele (sic). I assume that was Phil’s wave goodbye to me. We both were moving on to other realms, to more troubled parts of our lives.

What kind of suggestions did you make? I know it's been a long time but anything you can remember would be interesting to my readers.

Ubik and Androids, as I recall, got the most work from me. I’d have to reread them to recall all of them. Ubik I still recall best. I encouraged Phil to get deeper (and more accurately) into the world of the 1930s. Corrected a few inconsistencies and details. Worked with him on the atmosphere. Polished details on what is (a) most complicated story. On Androids, of course, I wanted a different title. And got one that I then thought was even worse. I urged him to extend Mercerism a bit, and of course that’s what got left out of the movie, but I think it was the point of the book. By the time I speak on this I’ll have done my best to refresh my memory on these.On Maze as well.

The first 90 pages of Ubik are notoriously slow going. Was that an issue when you got the manuscript?

-- Huh? If this is a consensus, include me out of it. I recall reading all those same initial 90 pages, at home, in about 60 minutes, probably accompanied by half of a $1.29 bottle of red Vina Underraga and perhaps both sides of the Rolling Stones’ “Between the Buttons.” Swept me off my feet. Seemed screenplay fast to me then and every time I’ve read it since. Is that just me (and my equally enthused colleagues, the late Ashmead and also late Diane Cleaver)? Or is it the Twitter-era attention span? As I recall, Ubik also sold fairly well for an sf hardcover with zero promo and advertising. At least 5,000, maybe 10,000 copies? Got a good reprint sale too, which never happened with slow books. The attention span of the average paperback sf editor having then been about a hundredth of the duration of a Mayfly’s infancy.

What can you tell me about PKD's writing process?

On my watch, he was turning out two-three novels a year, one per year for us, one or two for the paperback houses. Plus a lot of stories. I don't know just how he accomplished this, but the results speak for themselves. I had the impression he was quite a disciplined writer. His total average annual income must have been around $10,000 (same as mine then). Anywhere but in NYC, that was a tidy income then.

AS I said, he was both receptive and totally professional. We never met, we corresponded considerably and had a very few phone conversations. Which I think we both enjoyed a lot. (I hope someday someone will unearth the Doubleday editorial letter files which might help us more here).

Could you list your five favorite PKD novels? Maybe a brief couple of sentence reasoning for some of the picks:

Ubik: In which Phil does something unique at that time in sf--he engages the American experiential past, with evocations that must have come from his Berkeley childhood (I once figured out he must have been there for the evacuation of the Japanese community in 1942, by the way). Joe Chip is the most perfectly fashioned version, to me, of the mid-period Dickian hero. Is Do Androids Dream his first seriously eschatological novel? Well, there is Ubik. But Mercerism is such a tremendous trope. And lovely high-lit apercus abound--take that scene in the art gallery.
Eye in the Sky: The first novel, as I recall it, that brought Phil’s vision into (then) contemporary society.
Man in the High Castle: I rate this as one of the three mad breakaway novels of the early 1960s. The other two being Pynchon’s V and Vonnegut’s Cat’s Cradle.
A Maze of Death: I haven’t read this in a long time.But it shook me for years. A really bleak parable of human relationships, as, it would appear, Phil experienced them in his own life.

Is there anything else you'd like to tell me about Phil?

That I loved him through his work and still do. That one of my life’s deepest disappointments is that I never met him.

Marc has signaled his enthusiasm for attending the Philip K Dick Conference planned for September of 2012. I can’t wait to learn more about his work... Thanks to Marc for his time, and to Jonathan Lethem for putting us in touch...
Posted by Ragle Gumm at 8:19 PM

One question, what did he mean when he said "Then I worked on A Maze of Death. I’m glad Lethem has rediscovered this one for the world."

Excellent stuff. Now even more cross that I won't be at the conference!

As I understand it,"Maze" will be in the next Lethem-edited "Library of America" collection.
Marc

Do Androids Dream of Electric Sheep? is not awkward title! It is genius :)

As for the Lethem reference, it is for the Library of America "VALIS and Later Novels" volume. It came out at least a year ago (I think?).

I wonder if any of the letters to Tom are included in the SELECTED LETTERS OF PKD volumes? I've just finished the 1974 volume and there are none in there.

I'm with Marcin on the title of Do Androids Dream... I've talked to several people who only saw the movie yet could remember that the book had a fascinating title. They couldn't remember the whole title, of course, -- they trailed off after "Do Androids..." but they knew the book existed. Mr. Haefele is being entirely too hard on himself here. A big thanks all around for the interview.