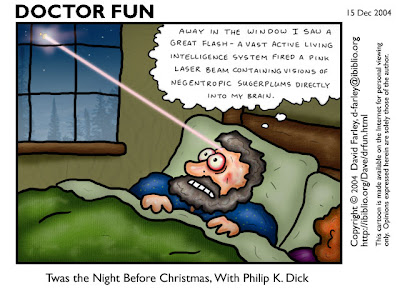 I've been away; now I'm back. Before we look back on the year that was, let's stroll through the internets for a moment to see what people are saying about the world of Dickiana.

I know a lot of you have had weird Phil Dick-style, pink-beam-esque mystical experiences of your own. I know this because you write me emails about them. Well, now we all have a place to share our inexplicable Dickian synchronicities: a new blog called The House of Ubiquity dedicated to "Mystical and Mysterious Encounters in the World of Philip K. Dick." Someone has already posted a super interesting entry about a dream involving the drugstore in Ubik. That site's not going to work without your input, so get on there and start talking about how weird you are.

That was the one really cool thing I had to blog about. Sigh.

Did you see that Adjustment Team was one of the best SF movies of 2011 according to ScienceFiction.com? Go here and you can learn that and other fascinating things. For my money Moon was the best SF movie 2011. You're probably saying to yourself, 'but that movie came out a long time ago!" But it, in my opinion, so far outshines any of the entries in this year's list (*admittedly I haven't seen a whole lot of these), that it deserves to win every year until something better comes out.

I found this weird site where people ask and answer questions, and they have some weird questions, like this one:

I have just finished reading VALIS, and I remain puzzled by something. It seems to be made clear that Horselover Fat is, in essence, an alter ego of Philip Dick - a separate personality of someone experiencing multiple personality problems, or just a literary device to cover talking to himself. Anyhow, Horse clearly does not have an existence of his own.

Admittedly, it's not exactly a question, and if it were, it wouldn't be a good one, but answer is pretty insightful. Read it here.

Reader Mr Hand turned me on to this crazy blog where PKD gets compared to Ken Wilbur, who I looked up, and is not really anything like PKD, except they both had esoteric ideas. And the blog entry is really weird because it's super reverential about Wilbur and kinda snarky about PKD, but the whole thing is set on a background composed of Dick's book covers. Sample sentence:

"Philip K. Dick, on the other hand, was a sprawling disaster of a man, who wrote bizarre science fiction stories."

Never gets old, does it guys?

Anyhoo, there's this piece about Lethem and Vonnegut and Dick's Exegesis... Sample sentence:

It's a shame then that the book is more or less a flood of babble. Dick's religious experience—some have called it an undiagnosed stroke—may have filled his head with concepts, but it surely didn't bless him with coherence.

Ever wonder about Portuguese States of America from Radio Free Albemuth? Well it's not without historical precedent, at least in the world of weird, esoteric maps, as Big Think explains:

In one of those parallel universes, there exists a country called the Portuguese States of Africa, spanning southern Africa from its Atlantic coast all the way to the Indian Ocean. This country, a transcontinental Lusophone giant perhaps one day to rival Brazil, is based on more evidence in this world than PKD’s possibly merely psychotic visions. It was envisaged in this Mapa Cor-de-rosa (the ‘Pink Map’).

Tessa Dick sold an autographed copy of Flash Gordon from Art Spiegleman. It went for what I consider to be a pretty good price.

SFF Audio is contending (with a fair amount of corroborating evidence) that PKD's short story "Upon the Dull Earth" is now in public domain.

That's it for now. Stop reading! Get some fresh air. Maybe tell your loved ones that you appreciate them.
Posted by Ragle Gumm at 4:06 PM

I wrote the crazy blog comparing PKD to Ken Wilbur. There is a point there if you read it again. Pure intellect vs. imagination and "dysrecognition" unleashed. Those who love PKD can look at Wilbur and know why. My description of his life, from what I have read, is accurate, and shows a man who took his life energy, as difficult as it was, and managed to give us as much as he did. I wouldn't have started my blog if my love and admiration did not run as deep as it does. But thanks for referencing it in your blog. I hope others who go there have a better sense of what I was trying to do.

Actually, Ken Wilber (let's spell his name right, everybody) makes for an interesting contrast with PKD. Wilber is not much of a novelist (see Boomeritis) but he is a giant philosophical intellect and integral thinker. Dick is also a great synthesizer, but an unruly one who combines the esoteric and artistic and unconscious and personal with the philosophical. It's a strange brew that kills what's inside of you (i.e., the crazy mind). The Exegesis is a monolith arriving on our doorsteps in 2011 that signals as much or more in its own way as Wilber's massive Kosmos trilogy (in progress). If you actually read the John Lentz quote in context, together with the other insightful posts in his PKD blog, you will see that far from being snarky about PKD, John is appreciating him deeply, celebrating his amazing literary accomplishment, and offering an antidote to all the backhanded praise and condescension we see in the latest round of reviews emanating from the mundane realms.

John, might this be the same Ken Wilber who wrote in a piece titled "Integral Art and Literary Theory" (from The Eye Of Spirit, Shambhala Press, 2001), that:

"It is one thing to expose a context; quite another to impose one. And too much of
symptomatic theory is, alas, the imposition of the critic's pet context and ideology, bereft of
confirming truth or evidence or justification (since, after all, there is no truth, only social
constructions, why bother with evidence in the first place?).

"And thus, from the uncontested fact that all truth is context-dependent, and that contexts
are boundless, we have finally arrived, slipping and sliding, at the dizzy notion that all truths are
merely subjective and relative, arbitrary and constructed. Truth is whatever you want, which
leaves us nothing at all, except that shell of nihilism filled with the thickest of narcissism, a
postmodern pastry from hell."

That last, marvelous phrase, "postmodern pastry from hell" would be an apt summation for what I've been trying to say for years about PoMo's evisceration of PKD's work.

I was very gratified this morning to read two supportive responses to the comments I posted on this site yesterday. Doug Mackey is a friend of mine and introduced me to PKD. I still use his book for guidance as I read through the novels at a pretty good clip. He has also provided invaluable background information and opened doors for exciting exploration, especially by inspiring me to take on the Exegesis. As his comments note, he understands the purpose of my comparing Ken Wilber (spelling correction acknowledged) to PKD. And as is usually the case, his powers of articulation are better than mine. Also, Doug knows me better as a person than anybody in this world and understands why PKD means so much to me. In the last few years, I have been walking a very porous line between reality and insanity. Right now PKD is the only literary figure who can reflect back to me that edge. The context for what I write is personal experience rather than academic association. Fortunately for me, Doug has both. My first post on this site provides the background to this context. Thank you, Doug.

To FCBertrand: Yes, it is the same Ken Wilber. Thank you for quoting such an exquisite passage in the context of this discussion and for giving me a fresh taste of his giant presence. I have read one of your pieces posted on this site and appreciate a veteran reaching out to a neophyte in the PKD experience.

Postmodernism, deconstruction, and multiculturalism have their own black holes, and even though subjectivity at the level with which PKD can be fully engaged remains incommunicable, it doesn’t matter; if one penetrates his writing deeply enough, one will find not two sets of foot prints, but one. From there nothing, indeed, is what it seems.

Hey John,
We're all (hopefully) friends around here. Certainly I didn't mean to minimize your contribution to understanding Dick. It's just, you know, a little pepper for the page, to make up for the fact that I am simply posting links on the page, rather than doing something important like comparing PKD with another important thinker.

I asked some people more familiar with Wilber's work about the comparison and they pointed out that Wilber was kind of a 'straight edge' and that his vision of reality gave very little credence to stuff like visions, hallucinations, revelation, etc. Not to say this attitude is wrong, but it certainly differs from Dick's.

Hope you got some traffic to your site out of the whole thing...

Happy New Year Thank you for this blog!