Total Recall, Recalled For You 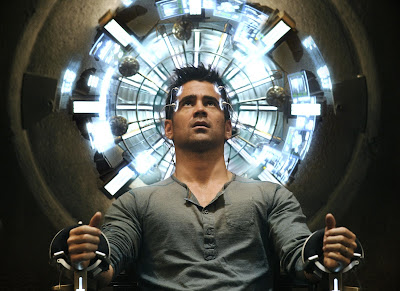 Unless you're maintaining Unabomber levels of media isolation, you've probably heard that yesterday marked the opening of the newly remade Total Recall. That the movie is getting panned should go without saying. Also unworthy of mention are the pools of ink being spent on Shallow Articles About Philip K Dick which I'm too busy to chronicle.

The good news is that I saw the newly re-imagined Total Recall last night with Mr Hand from the PKD and Religion blog. I totally expected to hate the movie, and so I was surprised when I found myself enjoying it. You want schlock? This movie has schlock out the wazoo!

Now if you're poor and the price of admission will be missed, do not go see Total Recall in the theaters - while the set design and production values look great on the big screen, you can enjoy this one at home. But if you're flushed with cash and like movies, Total Recall is a good time.

A couple of observations:
This movie takes Dick's "bitch-wife" motif over the shark, and it's great fun to watch. You will groan out loud at some of the dialog and soundtrack cues - unbearable. But the whole thing takes itself just lightly enough to get a little Dickian. There is schlock, and there are claustrophobic entropic future settings, and together effect is far more Dickian than anything in Adjustment Bureau. There are also technological innovations (like an elevator through the earth) that make no sense. Don't get hung up on it, folks. Read it as metaphor.

Because that's the thing, I liked this movie on a metaphorical level. I thought it worked pretty nicely to literalize the figurative, and drive home the increased deprivations of Late Capitalism headed our way. Grab some pop-corn, leave your Heidegger at home, and have a blast!

Also, be forewarned, there are A LOT of dodgy chairs in the movie.
Posted by Ragle Gumm at 12:16 PM

Good review Ragle. This film was a whole bunch of fun and even though it was very predictable, I still turned my brain off for a good 2 hours and enjoyed myself. Also, can't go wrong with a cast like Biel, Beckinsale, Farrell, and Cranston, just to name a few.

PKD's spinning in his dodgy chair, I'm sure.

It's interesting trying to guess how PKD would feel about the way his work has been popularised in modern cinema.
Would he prefer Colin Farrell or Arnie...?

Unfortunately we will never know :(

This might have been covered previously, and if so I apologize, but how does the Total Dick-Head crowd feel about the original Total Recall?

I'm probably in the minority, but I loved it. As much as Aaarrnhold does not match a PKD protagonist, I think interpreting the movie as a dream/fantasy (which makes the most sense) forgives his ridiculousness a good deal. I think Verhoven did a great job to marry some real Phildickian twists and views to a silly accessible blockbuster.

As for the new one, I haven't seen it yet, but am glad if it takes a more PKD approach than the Adjustment Bureau, a very pretty film that pretty much contradicts the entire PKD spirit, imo....

Schlock! If it approaches the Edgar Ulmer Asymptote of Schlock, then I'm sure I'm going to love it.

does anyone have link to original Total Recall text?
--
Does the following 2012 Total Recall dialogue match the text / meaning of the original book?:

Total Rekall 2012
*I want to remember
-why
*so I can be myself, to be who I was
-It is each man's quest to find out who he truly is,
but the answer to that lies in the present not in the past, as it is for all of us
*but the past tells us who we've become
-The past is a construct of the mind, it blinds us and fools us into believing it;
but the heart wants to live in the present, look there, you'll find your answer

I just saw it this afternoon and thought it was a blast!

What the reviews--most of 'em bad--missed is that this is a film about how we're living now. Our reality is mediated for us by those who manipulate us to suit their agendas, and the forces of imperialism and capitalism--the military/media/industrial/financial complex--are as a metastasizing tumor upon the world...there are no boundaries it will not breach in its ever-unsatisfiable gluttony for power, dominance, and resources.

I really like Verhoeven's TOTAL RECALL, and it did succeed more at suggesting the whole thing might still have been a Rekall-implanted memory/fantasy of Quaid's--where this one barely attempts to have us consider this and is happy to have us accept the action/adventure/spy story as unambiguously real--but I think I prefer this one.