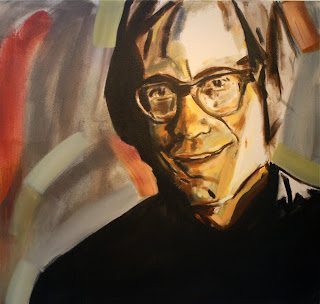 Sad news, everyone. PKD's friend and former executor Paul Williams died last night after a long battle with early-onset dementia. According to Paul's wife (and dedicated saint) Cindy Lee Berryhill, "Rock-writer Paul S Williams, author and creator of CRAWDADDY magazine, (and my husband), passed away last night 10:30pm PST while his oldest son was holding his hand and by his side. It was a gentle and peaceful passing."

Paul's contributions to Dick's career were the stuff of legends, and in addition to writing a feature on PKD for Rolling Stone Magazine, he also helmed the Philip K Dick Newsletter for a number of years with an embryonic Jonathan Lethem.

I use an essay of Paul's in my freshmen composition class. It's about The Beatles song "The Things We Said Today" and it is has some of the best topic sentences I've ever read.

Indeed a sad day for Paul's family, friends and PKD fans everywhere. When we needed him he was there for us. God bless you, Paul!

I'd love to read that essay David if you know where it can be accessed?

Very sad. I was a reader of some SF and fantasy when young, and I was familiar with the name Philip K. Dick but had never read him. In Fall 1975, just turned 20 and away at college for the first time, I read Paul's article about PKD in Rolling Stone (still have the original copy at my parent's house) and it spurred me to read THE MAN IN THE HIGH CASTLE. I enjoyed it but I was left with a vague feeling of..."Is this what all the shouting's about?" But I then read THE THREE STIGMATA OF PALMER ELDRITCH and was blown away. It was not just the awesome effects of the novel that got me, but Dick's voice. One can't necessarily recognize his unique voice by reading only one novel by him, but read more than one and it becomes immediately apparent. From then on I bought everything I could find by Dick and became avidly fanatic for his work.

Later, after Dick's death, when I first heard of the Philip K. Dick Society Newsletter, to be edited by Paul, I promptly sent in my cash and was a subscriber for the entire run of its publication.

It's tragic that Paul's last years were blighted by his accident and declining health, but Paul made a difference in the world, and people who have never heard his name were touched by him.