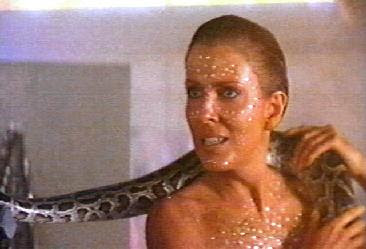 The SciFi Wire Reports:
Joanna Cassidy [who played exotic dancer Zhora] in Blade Runner, posted a cryptic note on her official Web site: She said she has finished reshooting her scenes in the film.

"Joanna has just finished reshooting her scenes from the original Blade Runner," the site reported. "Joanna is wearing her original outfit (which she kept over from the first production). These new scenes will be part of the upcoming special Blade Runner DVD re-release. Check back for more details."

Perhaps the revisions in 25th anniversary release will be more significant than first reported...

Thanks for the tip Alex!
Posted by Ragle Gumm at 1:09 PM

Why the reshoot? Do they think that, with the number of 'editions' already in existence, Blade Runner is a dead horse which needs to be flogged in a new way?

they reshot it because the stunt double from the original production was a beefcake dude. yeah a dude. it was obviously not joanna and it was an eyesore to the film. i saw the reshoot, it looks good. cant tell its not the same time period for production.

You know I saw this movie when it came out and there's between 15 and 30 seconds of footage of Zhora dancing onstage with her snake that has been deleted. Everytime I watch any of the versions of this film available it's so glaringly obvious that it's been censored (they go from announcing that Zhora is next on stage to being backstage) that it truley pisses me off. Silly I know but ... like shoot a half naked woman in the back - GOOD ... watch her do a strip tease act - BAD. Really sad.