Has PKD Become Too "Legit"? 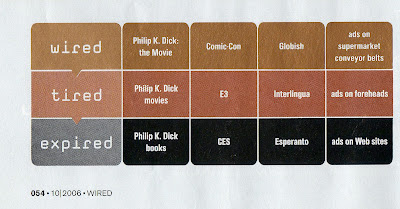 After proudly calling Dick's fiction "expired" less than a year ago, Wired Magazine has an article about the Library of America release titled "Philip K Dick Goes Legit With Library of America Canon" by Frank Rose, who from the title seems to misunderstand the word 'canon' with one N. It's not a big gun you can go legit with Frank, it's an agreed-upon collection of writers deemed serious by a bunch of academics who are themselves trying to have their lofty ideas about literature set in stone for generations to come.

Rose's article is really more of an interview with the volume's editor and resident chief Dick-head Jonathan Lethem in which Frank Rose asks questions like:

"Wired: What was it that made [Dick's] early works so bad?"

Is the answer "an idiot who doesn't bother reading them" too snarky?

Lethem: He was expending his energies on these unpublished realist novels. What happened with The Man in the High Castle was that he invigorated his science fiction with all the ambition he'd been reserving for his mainstream efforts. Suddenly, he vaulted up to this other level.

Lethem's response is interesting. In a recent review of 'Voices From the Street' Gabriel McKee argued that Dick didn't always crave mainstream success, and he's right. What makes Dick so unique was his inspiration to embed highbrow literary elements in his science fiction. It's a bit reductive to imagine that Dick would have given up sf completely if his mainstream novels had begun selling (but then again, perhaps he would've). It is more accurate to say that Dick was the first author to inhabit what is now a very heavily-populated region in the shadow lands between idea-driven science fiction and character-driven realism. The first novel that demonstrates the power of this recipe is the 1958 masterpiece "Time Out of Joint" which Dick wrote four years before "The Man in the High Castle."

If I had a time machine and could go back and interview PKD at just one point in his life it would be 1958, the year Dick wrote "Time Out of Joint" and "Confessions of a Crap Artist" and in so doing created a blueprint for almost all of his greatest fiction.

Rose's interview concludes with this exchange:

Wired: Do you think Dick would have been better received if he were writing today?

Lethem: It's easy to say he'd be Don DeLillo, but he's so deeply of his time. And I don't think it's an accident that he was so marginal. There was something about him that was deeply fugitive. It's hard to believe in a Dick who's been domesticated into a life of literary prestige the way we are currently domesticating him.

It's amazing how consistently these articles use the same hook: Dick's canonization is remarkable because nobody saw it coming; after all Dick's always been just a science fiction writer, but Dick's brilliance is not news to any of us. What's amazing to us is that people overlooked Dick as long as they did. I guess that's why these stories seem so flat to me: it's all old news.
Posted by Ragle Gumm at 8:04 PM

I read that article, too. Just the other day. Lathem is admirable for his defense of Phil. I've had "Voices from the Street" for about a week now, but haven't had time to read any of it yet. I am looking forward to it. This will be his first mainstream work I will have read. If I ever get it read I will post a summary/review on my site, if you're interested in another fan's reaction.

Time Out Of Joint was one of PKD's mainstream novels, until just after halfway through when reality crumbles. He personally thought of how well he had managed to pull this off as one of the greatest moments of his writing career.

While PKD had published SF novels previous to Time, and had great success with Solar Lottery, selling an astounding 300,000 copies to truck drivers and travelers via bus racks across the nation, the completion of Time marked his almost full-time devotion to re-inventing the SF genre.

PKD very much craved mainstream success, and acceptance, through the 1950s for his literary novels. He poured thousands of hours into writing and rewriting these novels (like Mary And The Giant), believing he was about to crack the big time.

PKD turned to fiction writing because he had something of a breakdown in his early 20s - an extremely disorientating attack of vertigo while working in a record store - and came to believe that writing was the only thing he could do to earn a living. And so he poured his energies into his mainstream novels, while pounding out short SF, with a devotion and dedication rarely seen in most writers.

MDK. Voices... is not the best of his mainstream. Check out Confessions of a Crap Artist and Puttering About in a Small Land if you really want to get a sense of what Dick was capable of.

Thanks for the tip, Dave

Anything that lists PKD as "expired" is too lame. And adding "Esperanto" to that list just confirms it.

Wired? Too much caffeine. Sets off the vagus nerve for hours.

Could I make a clarification here?

Despite what it says in the magazine, I did not ask Jonathan Lethem what made Dick's early works so bad. My question was, what made his early novels so bad — in response to Lethem's statement that many of them were. This was changed due to an editing error before the magazine went to press. For a full transcript of the interview the magazine excerpt was taken from, please visit my Web site.

Secondly, it would be extremely unusual at a magazine or any other publication for the writer to write the headline. I suspect the person who did write the headline had some sort of pun in mind. Thanks for the grammar tip, though. Much appreciated.

Finally, the whole Wired-Tired-Expired thing is not meant to be taken too seriously. You can find that particular entry funny or not funny, as you like. But if we weren't fans of Philip K. Dick, we wouldn't be writing about him in the first place.

I'm not sure I understand your critique of the term canon.

Actually the Wired title is correct in regards to the term canon, which is a group of books decided to be a good representation of a genre or of excellence, among other definitions.

Cannon is the large gun.

Duncan,
The title of the article is "Philip K Dick Goes Legit with Library of America Canon." Does "a group of books" refer to a particular collection of novels in a single binding or a group of novels generally considered to be important, significant, etc? In my mind the book that is being released tomorrow is not a canon. What the title seems to signal is that PKD is joining the canon of writers generally thought of as worthy of serious study as a result of his inclusion in the Library of America's roster.