The Empire in Disguise 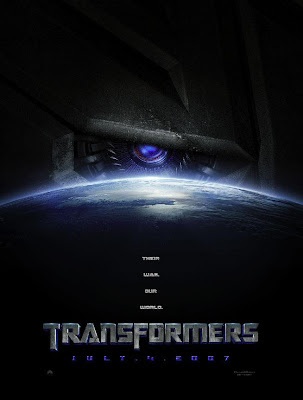 Yesterday, as I prepared to lecture on Do Androids Dream of Electric Sheep? (always my favorite day of the semester), a student asked if I had seen Transformers. I felt deep in my heart director Michael Bay wouldn't be able to resist filling my mind with vapid musings, philosophical packing material wrapped around the absence of at least one good idea, so I asked, "Does it have any big ideas in it?"
She thought for a moment and said, "That the secret to life is the cube, and the Transformers are looking for it."
Let's just say I wasn't convinced to rush out and see it last night, so I was surprised this morning when a short excerpt from a review of the movie written by Gabriel McKee, author of Pink Beams of Light from the God in the Gutter: The Science-Fictional Religion of Philip K. Dick, seemed to indicate he thought PKD would like the film. Luckily McKee's review Things that can't be said about The Transformers (and some things that can be said about Philip K. Dick and Martin Luther) pans the film but also uses it as a springboard for an interesting examination of the illusory presence of evil in PKD's work, tying it together with some of Martin Luther's writing.

"The idea that there is a hidden world, that the true meaning of our universe is obscured, that things are not as they seem—this has always struck me as one of the defining concepts of Christianity, if not of religion in general, and it is certainly key in Dick's theology."

Yes it is. And until recently I read Dick's notion of evil as an external force, describing suffering as imposed from without either through (what seems to me a rather psychotic) design, or the intrusion of malevolent forces that meddle with our reality. One of Dick's central questions in VALIS, Radio-Free Albemuth, and the Exegesis is precisely who was trying to make contact with PKD in 1974.

"The manifest and visible things of God are placed in opposition to the invisible, namely, his human nature, weakness, fool-ishness"

So, theologically speaking, it is not Satan who stands in opposition to God's goodness, but instead the base nature of humanity itself: namely our selfishness. The idea that as humans we are our own worst enemy is perfectly clear in Do Androids Dream of Electric Sheep? when we see Deckard must overcome his own selfishness in order to become less of a "machine." The ability to empathize with another being is the ethical ideal both man and machine should strive towards.

But this message is more deeply buried in books like The Man in the High Castle and Time Out of Joint. In these books not only are the character's personal worlds dystopian, they're dystopian because of their self-centeredness. What follows are not McKee's points, but my own (so much for selflessness huh?). We are not imprisoned in the Black Iron Prison from the outside, but rather we sentence ourselves to this fate when we disconnect with the world - and more importantly the people - around us.

"An intelligent approach to the Transformers would explore the idea of noble humility, or at least of unexpected importance, with a moderate degree of follow-through, and might even incorporate a tinge of this theology of obscurity. (Admittedly, Michael Bay's film tries to do this in a couple scenes, but the themes fall apart as soon as the plot does, which doesn't take long.) In an alternate world, through a glass or a scanner darkly, Philip K. Dick lived long enough to see the original Transformers, and saw some of the wonder that the toys' concept can reveal. In our world, though, we're stuck with Michael Bay."

Below: Is this the Tranformer's motto or Michael Bay's appearing on the side of whatever transformer is also a police car? Nice Touch! 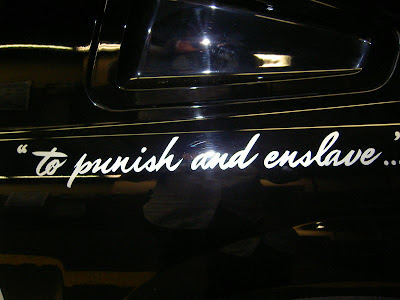 i really don't see the point in analyzing Transformers. its a fun, dumb action movie with big robots destroying stuff. i've seen it twice and could find absolutely no ideas (big or small) in it at all.

I disagree. The more unthinkingly bad a piece of art is, the more it can reveal about what we're NOT thinking about.

Transformers UNTHINKING? When the whole thing, replete with fallen angel quotes and images, references to armageddon, racialistic propaganda in the placement of the races within their assigned castes...

Jeebus it's the least thoughtless schlock film since forever.