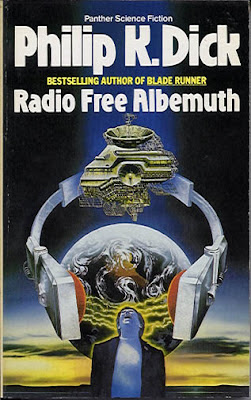 Dick-head John Alan Simon sent me a heads up about a live reading of his film script for Radio Free Albemuth happening tomorrow. Simon writes:

"For any of you in the Los Angeles area -

We're having a reading of my film script for Radio Free Albemuth (a.k.a. Valisystem "A") on Monday at 7:45 pm at Pacific Resident Theatre located at 705 1/2 Venice Blvd - three blocks west of Lincoln.

No props, no sets, just music stands for the actors with a narrator reading necessary setting and action passages.

Plenty of free street parking and in the lot behind the theatre.

This is a rare chance to hear a group of very talented actors give voice to a new adaptation of one of Dick's most personal and prophetic works.
As I'm sure many of you know, RFA has also been performed in the past as a stage play. Our reading is of a new screenplay for a possibly upcoming movie. (more on that later, hopefully).

No admission fee. But it is essential you r.s.v.p. to me at simon50@aol.com to be placed on the list. - Please let me know if you would like to bring guest or guests. I will send you confirmation.

Please include your phone #.

Also, if you're in the film business, please let me know in what capacity. It's not a disqualifier, but I may want to speak to you about confidentiality - since this script is still a work-in-progress."

I wish I could make it John, and for you LA Dick-heads (rumor is there's a lot of you) check this out! By the way, for those of you who think you may not be able to capture a Dick story with just dialog, check out this letter PKD wrote some 16-year-old girl about writing in 1982:

In it he says good dialog is the heart of the story and too many authors over-describe things when they should be using dialog to push the story forward.
Posted by Ragle Gumm at 10:45 AM

Was the reading recorded? I'd love to hear it if it was. Just finished reading RFA, coincidentally, so I'm really interested to hear how its fared as a script.