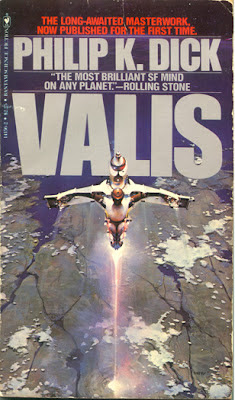 Well I suppose if you're genetically predisposed to hate spoilers I've already told you too much - don't hate the player, hate the game. According to a blog dedicated to "Lost" spoilers, PKD's ultimate novel of self-exploration, VALIS, will be featured in episode four of the upcoming fourth season. Argentian author Adolfo Bioy Casares’s The Invention of Morel will also be featured in an episode titled "Eggtown" set to air February 21st.

Then again, I think I heard somewhere that you shouldn't believe everything you read on the Internet so take this with at least one crashed jetliner's worth of salt.

Thanks Michael Rhodes!
Posted by Ragle Gumm at 10:46 PM

I don't watch Lost, but it has always looked fairly interesting. But any reference to VALIS is good. It is by far my favorite book I've ever read. It would be nice to see it referenced a lot more in popular culture (well, I also wish that more people I know would read it. But thats not gonna happen either).

That's also what Sawyer from "Lost" says when when he asks about a book one of the Losties is reading. Can't remember what they were reading, tho.

I have a slight dilemna i've been wrestling with. What to read first Valis or Radio Free Albemuth...i'm an up and coming Dickhead.

MDK...the name of the book is The Third Cop.

Desmond was reading that book.

What VALIS will be doing in'Lost' I don't know. I've watched some of the early sesons of 'Lost' and think it is interminable, incomprehensible garbage! -- Lord RC

LOST is great - It takes a lot of work to understand what is going on but it's well worth the effort. Very intellectual show. The connection to V.A.L.I.S., although not yet clear, is going to become quite important.

I think it's inevitable that PKD, esp in the form of VALIS, should emanate into the Lost world. I mean, I remember watching a director's notes version of a Lost episode and they promised they would resolve the series without resorting to "And then he woke up". I mean, how else are you gonna Deus Ex Machina wihout dues ex machining the great PKD. I mean, it's perfect. After all in the most recently found (ex lost) PKD interview (the one with the crying baby, is that christopher?), Phil himself says: the deed comes first, and then comes the explanation.

I would say Radio Free Albemuth first because it's the version with more readability, like bud light has "drinkability".