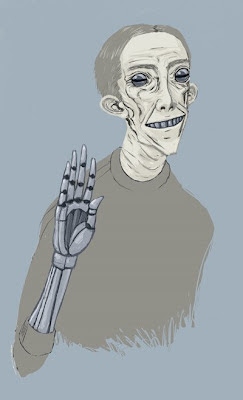 Above: An awesome portrait of Palmer Eldritch by reader Karla who many of you may remember as our Galactic Pot Maker.

In an article a couple months ago titled "Novel Inspriration For Would-Be Entrepreneurs", The Financial Times created a list of "the best novels featuring entrepreneurs", writing:

"We all need inspiration in life, and never more so than when starting or buying a business. So I believe that heroic examples of entrepreneurs in fiction can serve an important purpose beyond their literary merit - they might just motivate someone to go out a build a company."

Guess what their number one pick is?

"The Three Stigmata of Palmer Eldritch by Philip K Dick. The author is easily the best science fiction writer of all time. This book, published in 1966 and one of his best, tells the tale of a sinister interplanetary businessman who discovers a new compound called Chew-Z. It seems to be the perfect recreational drug. Those who take it are taken to an imaginary universe - where entrepreneur Palmer Eldritch is god."

So, just by a show of hands, how many are feeling inspired to go out and build a company after reading T3SoPE? Could the answer to Rand's famous question: 'Where is John Galt' be "he's on his way back from Proxima Centauri"?

In other news, the SF site i09.com recently ran a list of Science Fiction Rupert Murdoch's:

Yeah, he's using me as his sole reference. But I'm right, and so, by extension, is i09.com. Good for them! At least I've read the book. I'm not so sure about the Financial Times people. I hope they can tell the difference between a cautionary tale of capitalism run amok and Rand's fetishization of greed (which is number four on the list).

You may have noticed, I've added some Google Ads to this blog. All this talk about capitalism has made me even more determined to get that paper! So far I've made .04 cents! I'm starting to rethink quitting my high-paid job as a pre-fash consultant in order to make money at home.

Finally, I'm sure you've all given up on me, figuring I'll never finish blogging The Three Stigmata of Palmer Eldritch. Good news, I'll take up right where I left off as soon over my summer vacation begins in late May.
Posted by Ragle Gumm at 2:26 PM

Ha, I just finished rereading it, myself, and I have a hideous digital painting to show for it!

Philip K Dick seems to be inspiring a different kind of entrepreneurs.

The eyes on that picture are particularly good - from a distance they look normal, then you take a closer look....

Like many of Dick’s novels, The Three Stigmata of Palmer Eldritch utilizes an array of science fiction concepts and features several layers of reality and unreality. It is one of Dick’s first works to explore religious themes.
In 2006, the book was adapted to a stage play by Polish director Jan Klata.I loved it!