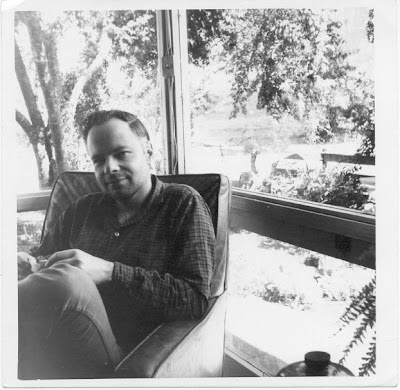 I've been up to visit Anne Dick (PKD's third wife) in Point Reyes three or four times now. On my last trip up Anne was kind enough to give me some scans of a few rare PKD pictures. More about my visits with Anne in a forthcoming post, but for now check out the picture.

I thought this was a great picture, perhaps taken in 1960 or 1961. I've heard from a number of sources that PKD hated having his picture taken, but in this shot he seems to be doing more than simply tolerating a photograph being taken of him. His smile doesn't seem like a mask and his stare is good-natured, not quite as standoffish as he sometimes appears.

I sent my impressions of the photo to Anne. She responded:

"This picture was taken toward the very end of our marriage and my perception is that Phil looks terrible as if he were deteriorating from within. I've never liked this picture. I've gone back and studied it just now to see if I can understand why it makes me feel this way. I think it is because of the difference between the expression of the lower part of his face, a smile, seemingly pleasant, and dead eyes. Contrast that expression and the look in his eyes with the picture with me in front of the fireplace or other pictures taken early in our marriage."

You can see that photo here.

I have gone back and looked at the photo of the two of you and can see what you're saying. If it was late in the marriage perhaps he was writing The Three Stigmata of Palmer Eldritch?

"You’ve hit upon something! I think that smile is Palmer Eldritch's smile; the eyes of my Phil are dead. He probably was writing Stigmata at that time, the very end of our marriage. He finished that book after he had begun to leave. (He came back and forth a number of times.) Have you noted that the character of Palmer Eldritch changes at the end? He becomes not such a bad guy after all.

Yes, those two pictures were both taken at the end of everything and I think they are both very sad."

Maybe I just like this picture because I've stood in that corner of that living room: 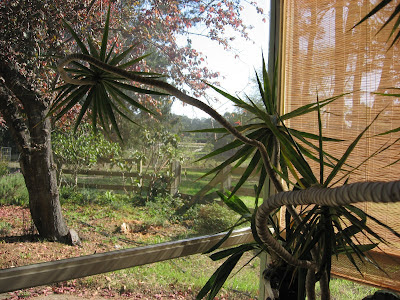 Thank You Anne!
Posted by Ragle Gumm at 7:00 PM

fantastic! i've never seen any photos from this era...just of the charmingly beardy late in life PKD.

thank you for sharing.

If you look at the photo, Phil is kinda contorted, a bit like a wizened old crone or something. I know what Anne means about it being Eldritch-esque. The bearded one is much warmer.

That view of the old fence and the trees and hill beyond is pretty much the window view PKD had when he was writing The Man In The High Castle at Anne's. Phil's office back then was the next room along.

Anne Dick is a wonderful host, her house and yard are immediately recognisable from at least seven or eight PKD books and short stories and Point Reyes is one very special little town indeed.

When I was there in 2001, I asked one of the store owners why Point Reyes didn't promote itself as the 'home' of Philip K Dick. Other towns pay more homage to far lesser writers. The Point Reyes store owner said "Who's that?"

Perhaps a statue in town of Phil reacting to the Palmer Eldritch vision he saw in the skies above Point Reyes?

Hello. This post is likeable, and your blog is very interesting, congratulations :-). I will add in my blogroll =). If possible gives a last there on my blog, it is about the MP3 e MP4, I hope you enjoy. The address is http://mp3-mp4-brasil.blogspot.com. A hug.