Flow Some Thoughts On The Book, The Blogger Did 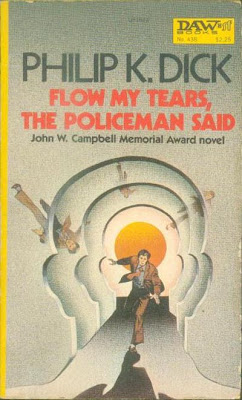 This summer I have dedicated myself to rereading all five of the books in the second PKD volume from the Library of America:

I'm on chapter four of Now Wait For Last Year, and I recently completed Flow My Tears, The Policeman Said, which I have to say blew my mind. It had been a while since I read it, and, admittedly, I had never done a close read of the book. Like I think happens quite often with PKD's readers, I devoured Flow soon after I discovered Philip K Dick amid a flurry of his books, reading something like five books in a couple of weeks (all of which kind of blended together in my mind).

So I was reading Flow and when I got to the end I was like, "what the hell happened to the Callisto cuddle sponge that knocked Taverner into the world where nobody knew his name (much like a Boston without Sam Malone or a bar called Cheers)?" It kind of weighed on me as I knew I could never really talk seriously about the book (much less assign it in a literature class) if I couldn't get a grip on the plot. What's more, there's tons of evidence that PKD spent more time and energy revising, rewriting, and reworking Flow than any other novel, so I knew that this wasn't just some plot hole PKD had failed to fill.

I asked around, but failed to get an answer that satisfied me. So I moved on, but then I remembered that PKD's agent had given him a challenge. I think it was Terry Carr who told PKD (please correct me if I'm wrong, I'm away from most of my reference materials) that he needed, once and for all, to come up with an answer to the question he had been asking his entire career: what is real?

Dick's answer came in the form of Flow My Tears which, at its core, is a mediation on various types of love (for a detailed list of the types of love, see the dialog between Taverner and Ruth Rae that PKD cut from the book at the advice of his editor excerpted in The Different Stages of Love published in issue #28 of the Philip K Dick society newsletter).

Anyway I had a 'Eureka!"moment. Dick was answering the question 'what is real?', in part, by stating what is not real. And what isn't real is the world of the first chapter in Flow, a world in which there is no agape, no empathic love, no concern for anyone but the self (as demonstrated by Taverner's incredible self-absorption and his reckless disregard for the feelings of others).

Taverner's reality in that first chapter is based on his status as the one of the biggest celebrities on the planet. What's more, his identity is based on his wealth, and his power over others. I think Dick is suggesting these aren't the best ways of establishing an identity, because the world that Taverner discovers when he wakes up in that seedy motel room is far more 'real.' In this world, Taverner has no identity (and more importantly, no identity papers) and, the connections he makes with people in that world are based on intimacy (the sharing of the self with others) rather than the exercising of power over the people around you.

It's interesting to note that the notion of vertical power dynamics (who's got more power and who's got less) is now often ascribed by interpersonal relationship experts as a 'male' view of reality, while a horizontal axis which concerns intimacy (I'm closer to person A than to person B and therefore person A is more important to me than person B) is often thought of as a feminine way of looking at the world (please don't ask me to name these 'experts' - I'm trying to find my notes from the interpersonal communication class I took ten years ago).

So what's my point? Just that the 'reality' in chapter one is not real. I'm not saying it was a hallucination, or a 'dream within a dream' as Poe might call it, but rather, there's no there there, like a schizophrenic's private world, which ends abruptly at the tip of his or her nose, an ornate solipsism formed not from perception but from a flawed sense of self, and an exaggerated sense of self-importance.

Flow will someday make a great movie. It's perhaps the best suited for adaptation aside from Do Androids Dream of Electric Sheep?. It's set over the course of just two days and has a relatively simple setup: a lost soul tries to find his way home (it's the Odyssey narrative, which has been used in tons of movies, like, for example, E.T. and Oh Brother Where Art Thou?). Of course a screenwriter is going to have to provide a resolution for the cuddle sponge event. For awhile, before my realization about the book, I was thinking it would be great if Taverner at the end of the film were to suddenly discover the cuddle sponge's feeding tubes in his chest, thereby making Taverner's struggle to return to his world a dream within a dream. But now I realize this would be to invert the moral of the novel (ala Blade Runner). A far more faithful ending would see Taverner realize he was never famous, that chapter one was a delusion of grandeur.

I want to talk about Felix Buckman and his role in all this, but I'm spent, and it's time to go swimming, so stay tuned.
Posted by Ragle Gumm at 6:55 PM

I know I've read Flow My Tears, but for the life of me, I can't remember it.

I do clearly remember Martian Time-Slip. It's one of my favorites. I love the part where they're caught in a kind of time loop, and they're drunk, and there's all that sexual tension going on. It's absolutely brilliant.

Jerry, I suggest you read Martian Time-Slip one more time.

I recently finished "Flow" about two weeks ago and I really enjoyed it. As with all of PKD's work - reality is relative - and so was love. In the end, I think Jason was just some guy shacked up in a motel with delusions (hallucinations) of grandeur. Great book!

nice blog; I enjoyed reading it
~~~

Tom Cruise was quite close to making Flow My Tears into a movie, as a producer and lead actor. A Hollywood friend told me (back in 2001) that he lobbied Spielberg to make Flow My Tears before Minority Report realitised.

How demented would that be? Cruise, then one of the world's biggest stars, playing the lead role in a reality-fucking movie about a police state society, obsessed with celebrity, centring around a cop in love with his sister?

PKD probably could have written another great novel just off that idea alone!

This changes for me month to month, but Now Wait For Last Year is the best PKD novel ever.

I'm glad to see NOW WAIT FOR LAST YEAR get the attention it deserves with its inclusion in the new LOA collection. When I read it (over 25 years ago, yow!!), I thought it was one of Dick's towering achievements. I haven't read it since, so it's long overdue for a new reading.

I've read FLOW MY TEARS twice,I think, (and I saw a stage production of it here in NYC years ago by the avant garde MABOU MINES theater troup), and I think it's pretty fair, but it never really struck me as being one of Dick's top flight books. It seems more like a summing up of themes he had addressed more cogently in previous books. (Maybe this is another one that's due for a new reading.)

Every book he published thereafter, A SCANNER DARKLY, VALIS, THE DIVINE INVASION, THE TRANSMIGRATION OF TIMOTHY ARCHER, and RADIO FREE ALBEMUTH are all first rate...what a way for any writer to go out! (Even Thomas Disch, an admirerer of Dick but certainly no uncritical fanboy, gave Dick kudos for the achievement of his last books.)

Aspects of "Flow My Tears" have indeed been used in a recent movie. Check out "Southland Tales". It is a great movie, one of the better ones Hollywood has barfed out in the past few years. One of the main characters is Taverner; it takes place in a police state society (with references to the current Homeland Security); and at one point, a cop played by Jon Lovitz shoots an unarmed couple and utters the phrase "Flow my tears".

Flow My Tears is the last book i read. I'm a huge Philip K Dick Fan, and he's the reason i'm a writer.

I found it very refreshing for him to step outside himself for this one (in my opinon.) Although all his classic themes are there. His $h!#-hits-the-fan senario played out very diffrently than normal. Also it seems like a novel verson of a short story. It centers heavely around a main character and doesn't bounce around much at all. Another unusual thing i noticed is the fact that he provided an Epoluge and with it an emmense ammount of closer. I think that is very un-Phildician of him. The end of most of his works leave you saying "God, that was amazing but what really happned? Did that happend, was that person really experinceing that?"

The only major 'flaw' or rather something i couldn't grasp was the creature that sucked on his brain and left tubes in it. I know that's not completle accurate account of it, but i'm sure you know what i'm reffering to. So it was very reffresing to read this blog that tackled that issue.

So... Am i right in assuming that this whole thing was based on the drug that Felix's wife took? This whole thing happned as a hallusination in her brain caused by a drug that actually alter space-time, causeing everything? I'm not the sharpest tool in the shed so feel free to elaborate to me on that one.

Lastly, i'm curious asto how all fans of Flow My Tears feel about the film Southland Tales. I pesrnally was pleased by it's heavy influnce on the film.

I fear i've said to much. I will leave you fellow Dick-Head's now.

(p.s. "The Maze Of Death" is my all time favorite, until i discover one i like better)

Sorry for off topic, but 2012 is close, is this really matter?

an agape-free world? that's a great take on it because it would fit Dick's explorations of 'the tomb world' concept.

as for the who, how, what, where, why of the reality and/or identity flips in Flow (and the other novels), i don't see the problem and i would point to David Lynch; no/one worries over Lost Highway, Mulholland Drive etc. do they?