You Can't Libel The Dead, But Disch Gives It A Hell of a Shot 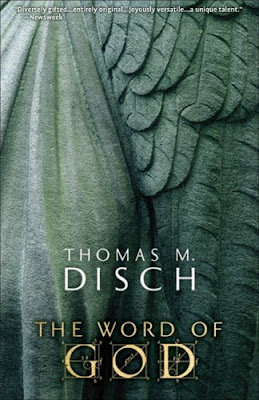 A while back I posted about Disch's death and his last novel which features Philip K Dick. I may have even thanked him for including PKD, I don't remember - it's all a blur. Anyway, I just finished the book and, well, woah...

First let me ask a question: Why in the hell is Disch so pissed at PKD? Oh yeah, right...

While Disch was always effusive in his praise of PKD's work, this book is anything but flattering.

Here's a description of the plot:

Dick is thwarted by our god [who is, coincidentally, Disch himself]."

You're probably thinking, 'oh right, it's sort of like that; it can't be quite that weird' - but it is. Only when Disch fills out this summary, the details are even more disturbing:

"Lord knows he looked like he'd been dead that long. Despite Joceyln's [this fictitious PKD is married to one Joycelin Shrager - a subject of Disch's poems and at least one short story] best efforts with the scissors and some touching up with Just For Men, his beard and 'stache had gone all scrofulous, and there was some kind of fungoid growth under his right eye as hardy as a dandelion" (77).

"Maybe there'd been others [suicide attempts] since he'd come out of more than one gray-out during the bad years with his .22 beside the bed and no memory how it had got there" (78).

Then there's Philip K Dick, in hell, as a nerdy and acne-riddled twelve-year-old boy, letting loose from the dais with a rallying speech that inspires Alger Hiss, Julius and Ethel Rosenberg (among others) into a sort of nationalistic frenzy as he prepares to return to Earth in 1939 to prevent Disch's birth, and, ultimately, change history so that Germany and the Axis powers win WWII - ala Man in the High Castle.

Hey Disch, bitter much? His PKD (still in hell) says, "But I think the worst case of someone stealing my ideas was a book called Camp Concentration, which was completely my own idea, but this other writer, Disch, had the same agent I did, and the agent must have shown him my outline, which I'd forgot all about. That's how I am, I have so many great ideas that I just forget half of them. But when Disch took my idea, he turned it around, and he made it a Communist type of story. Talk about "Look What They've Done With My Song'!" (117).

The worst, most infuriating part of the book is the suggestion Disch makes implicitly: that Man in the High Castle is Dick's wish fulfillment, that Dick wanted the Nazis to win WWII. During a lecture in hell, 12-year-old PKD stands up and yells, "Deutschland uber alles! Hurrah!" To see MITHC as rooting for the Nazis is to fundamentally (and I believe, intentionally) misunderstand the novel, but it's not a wholly new charge; Rickman goes into some depth defending our Wagner-loving friend from similar charges.

Disch's book alternates between plot and a screed against religious dogmatism. I actually kind of like the scene where Jesus and Peter travel to Earth to see Gibson's "Passion of the Christ." The book is a wild ride, a quick read, and, while it's certainly inventive, it ultimately falls flat.

It isn't Philip K Dick that appears in Disch's book at all. The character Disch names Philip K Dick bears no resemblance to PKD; he is utterly without humor, or charm, or insight; he is blind ambition personified, and as a result he is a flat, uninteresting character that says more about Disch's bitterness and ennui than anything else. As Disch writes (and demonstrates), "Hatred can pre-exist its objects" (92).
Posted by Ragle Gumm at 7:11 PM

Wow. Why the sudden hatred of PKD?
What a ridiculous suggestion, to say that Dick wanted the Axis to win WWII. The reason that he said he didn't write a sequel to the MITHC, is that he couldn't do any more research into the Nazis, as it was disgusting him too much.
-giospurs

OK, confessional time. I read a lot of PKD for a while, and then encountered my name in his work. I was born shortly before he died, but at that moment, there was a crazy sort of idea that popped into my head that I was PKD reincarnated. Yeah. It's crazy, but it was totally convincing at the time. And I have authorial delusions. And I'm still stuck on this idea of the transmigration of the soul before death. Before I even touched PKD, when my son was born, I thought my consciousness would pass into him.

Based on your previous mention of this book, I had it on my list of ones to buy. I didn't get around to it, and now, after reading this, I don't WANT to buy it.

Let's hear it for procrastination! Yay!

So wait,thegiantsnail, you think Disch is PKD reincarnated, and he is writing about himself as if he is trapped in hell and preventing his new body's father from giving birth to him. Okay...

I don't mind slandering the dead - Disch comes across as a bit of a pre tentious tit in that Arena documentary about PKD (my only exposure to the man other than articles on t'internet since he popped off). But still, artists, eh? What can you do? Such fragile creatures...

No, anonymous. I said that I thought I was PKD reincarnated, and that I would be critical of PKD too.

Disch's meta-novel is careful to make the point that PKD-in-Hell is not the same person as PKD-on-Earth. He has been driven insane-with-malice after years of suffering in Hell. He did not start out that way.

I would highly recommend the book to anyone interested in PKD or Disch.

C. Jerry,
I read the book quickly but carefully and that is not the impression I got. Could you please provide a citation to support your assertion?

And why is he in hell with Alger Hiss and the Rosenbergs in the first place?

He's in Hell for the same reason lots of people are pictured as being in Hell...abusing one's self, abusing others, betrayal. All of which there are evidence for.

I'm not judging PKD, and I don't even believe in Hell in the Christian or literary sense. And neither did Disch, btw. For him it was one more fiction, useful for telling a certain sort of story.

To ignore Disch because of a perceived need to continue, post-death, a supposed emnity between the two is self-defeating. History will undoubtedly remember Dick as the "greater" writer, but Disch is an important American thinker and story-teller and deserves to be listened to.

And just for the hell of it: how would *you* feel about PKD if he had written, in his deep paranoia, to the FBI to alert them about *you*? Would the grandeur of his art erase all of your anger or discomfort?

Anonymous,
First of all I can't believe we disagree (on the internet no less)!

But, and I'm assuming here, you've read the book and you like it.

Cool. I liked some of the book; it's quite funny in places, but in the final analysis I didn't really like the novel that much, and it didn't matter to me that it was PKD in hell rather than Hemingway or Faulkner or whoever. I just thought the PKD character was flat and uninteresting.

The real bummer is that flat character made Disch seem flat, and his bitterness, well kind of juvenile.

I just don't want you to think I dislike the book automatically because it's a negative depiction of PKD.

The book is freaking hilarious!!! I've read all of Dick, and Disch, and found it funny, pithy, and thoughtful - the idea of Disch as not only a god, but THE God is well-plotted, irony abounds, and it's a GOOD book.

Plus, bear in mind that in real life, Disch and Dick had a very contentious relationship - Dick reported him to the FBI for suspected subversive behaviour as evinced in Camp Concentration - if you read the letters, you may understand why Disch and Dick were not the best of friends.

Their history together became fertile ground for the writer's imagination.

I read Disch's novel. It was somewhat entertaining, but defintitely not great.

His PKD seemed like a caricature used to project his own bitterness. I really don't care if he is justified in his bitterness. I only care if the story is good and the characters convincing.

I suppose the book is worth a read as its short, but don't have high expectations. In particular, don't have any expectations that it has anything to do about PKD.

In all that commentary about the Disch book, did anyone mention this;

Disch, 68, who has been called one of the most important science fiction writers of his generation, fatally shot himself in the head July 5, according to the New York City Office of the Chief Medical Examiner. Friends said he was found dead inside his New York apartment.

Speaks for itself, doesn't it?