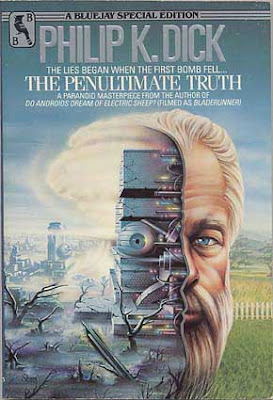 Well it's that time of year; the semester has started, the lines at the student bookstore wind around the building in an elaborate swirl, the panicked students trying to find space in my class are frantically emailing me, everywhere new binders and freshly sharpened pencils are unpacked and tasked with doodling, and the pile of diagnostic essays left for me to grade continues to languish.

With so little time, I have to keep the posts short.

So here's a nice little quote I ran into while currently reading The Penultimate Truth (which was unfortunately not included in either Library of America release, but people can watch an abridged version of the text at the Republican Convention this week):

In chapter twenty, as private investigator Webster Foote and his retinue of robot 'leadies' prepare to enter the room, where a Yance-man has been assassinated by a shape-shifting robot, Foote thinks to himself;

"... - clearly the door had been lovingly salvaged from some old mansion - he pondered for a moment as to the vanity of life, the fact that all flesh was grass and so forth, and then squeezed the trigger" (125).

The Biblical verse, Isiah 40:6, referenced here is not obscure at all, in fact it's one of the most quoted, but boy PKD sure doesn't make a big fuss about it. How many readers did he imagine would recognize this? It certainly is easier to find these passages now that we have Google, but how did he imagine his readers? Do you think he thought we'd look this up?

It is a relevant reference:

Generally, this verse is quoted to evoke a sense of mankind's temporariness, his transitory nature. Even our greatest accomplishments are simply sudden bursts of color in a field, almost as soon to fade as they are to bloom. In another part of the book, Talbot Yancy says in a speech (written by David Lantano):

"There is a certain ancient Christian idea, which you may know, that life on Earth, or in your instance, beneath Earth, is a transition. An episode between a life that came before and an eternal, other-kind-of-life to follow. Once a pagan king in the British Isles [perhaps Penda of Mercia? any other guesses?] was converted to Christianity by the image of this life being the short flight of a nocturnal bird which has flown in through one window of a warm and lighted dining hall of a castle, for a moment above the scene of motion and talk, of tangible fellow-life; the comfort of being within a place inhabited by others. And then the bird in its flight has gone on out of the lighted dining hall, out of the castle once more, through a second window. Into the empty, black, unending night on the far side. And it will never see that lit-up, warm hall of murmur and motion and fellow-life again" (58).

Once again, I am amazed. PKD has embedded high art and true depth in another of his novels, not so that it becomes the focus, but so that the focus of the novel transcends the plot, and ends up speaking to the our greatest concerns as readers and mortals. I encourage you to read The Penultimate Truth, and think about how many layers these two quotes are operating on. It's brilliant stuff like this that makes me so grateful for the chance to study PKD's work, and ultimately, ideas like these that change the way we see the world around us.

Update: Regular reader mckie has informed me the sparrow through the window allegory is from: Bede's Ecclesiatical History, Volume II Chapter 7. The King was Edwin of Northumberland. Nice work over there with the whole "not letting history get flushed down the toilet of American consumerism and instant gratification" thing.
Posted by Ragle Gumm at 2:48 PM

Funny, I'm planning on rereading THE PENULTIMATE TRUTH as my next Dick book.

The edition you show here though reminds me of how ugly all those Barclay Shaw covers were...his work is just terrible!

the sparrow in a darkened hall reference is from Bede's Ecclesiatical History, Volume II Chapter 7. The King was Edwin of Northumberland.

The Penultimate Truth is fantastic. But it must be read in conjunction with the Mold (or Mould) of Yancy.

On the subject of mould, it's perfectly normal for quite a lot of british papers and magazines to standardize (or standardise) spellings of things like Labor (Labour), color (colour), honor, center etc etc so as not to snag up the readers' eyes. A great many american publications do the same thing in reverse as a matter of course

FYI: Philip K. Dick Teams Up With Alanis Morissette To Save The World.

This is one of my favorite of Dick's books. Right up there with Martian Time-Slip.

I have an interesting story about an old copy of TPT I purchased in 2002.

Complete with pictures
Come have a look

Here's the URL of the site

mdk,
Thanks for the link to your blog with the picture of the publication info of the 1964 Belmont edition! I bought a copy of The Penultimate Truth online a few years ago and all pages up to the first page of the text were missing, so I had to take it on faith that it was the 1964 edition. Of course, now I just refer to the Vintage edition. :)
-Josh

David Gill wrote, "The Biblical verse, Isiah 40:6, referenced here is not obscure at all, in fact it's one of the most quoted, but boy PKD sure doesn't make a big fuss about it. How many readers did he imagine would recognize this? It certainly is easier to find these passages now that we have Google, but how did he imagine his readers? Do you think he thought we'd look this up?"

I imagine he thought most, if not all, of us would understand the reference and know it was Biblical. No idea if he thought about whether some readers would look up the verse or cared. It's preceded by "vanity of life" which was also Biblical allusion though less specific. Probably Ecclesiastes which refers to vanity a lot. See for example: http://www.bartleby.com/108/21/1.html and http://www.learnthebible.org/Ecclesiastes%20-%20Introduction.htm.

An American author at the time TPT was written could reasonably assume his/her audience would generally have some recognition of these allusions and their meaning. Part of the general culture.

That said, I do think there has been a lack of recognition that religious/spiritual elements/matters/themes/topics/issues have been a major part of PKD's writing from the beginning of his carreer to the end of it. "Beyond Lies The Wub", "Not By Its Cover", "The Cosmic Puppets", "Eye In The Sky", "A Maze Of Death", "Martian Time-Slip", "The Three Stigmata Of Palmer Eldritch" and a slew of other works come to mind immediately.

Philosophy and religion are often intertwined and it isn't necessary to believe any particular religion to use or accept the use of religious references, concepts or imagery in SF but it is notable that PKD seems to have used them more than most of his contemporaries.

thank you for paying so much attention to Phil's intensive shcolarship, which most critics seem to ignore or gloss over.

BTW, you can get the preview edition of Philip K. Dick's Owl at Amazon.

It is generally agreed within Hebrew Bible scholarship that Zechariah 9-14 is filled with allusions to other books within the Hebrew canon. Rex Mason's doctoral dissertation in the early 1970s contributed significantly to the foundation of this consensus.
-------------------------
Angelinjones
Internet Marketing

I feel abandoned by the Total Dickhead. He cares more about his students than us!

In protest, I'm going to favorite the Frank Herbert blog "Total Dune-Head" ABOVE this one on my favorites list. (And maybe even the Michael Moorcock blog, "Total Butt-Head.")

Moorcock has slammed PKD pretty hard. Is that what makes him a butt-head? Or are there other reasons? Never read anything by the man except his comments on Dick.

I should have said, "I have never read anything by the man...." I realized that it might seem like I was suggesting his comments on Dick were the only thing worth reading. On the contrary, his review of "Three Stigmata" was awful, willfully overlooking the book's merits.

Yeah, I was totally referring to the "Palmer Eldritch" review in calling Moorcock a "butt-head." Course the man is welcome to his opinion, and some people really like his books. Still, it was a pretty "ass-anine" review IMO. (Ha ha.)

A little while after I left the comment it occurred to me I could have jokingly referenced a Michael Moorcock blog called "Total Cock-Head," which would have been funny, but might have lost the slight pejorative zing that I was going for.

Is Jenny a reader or a Philip K. Dick character escaped into our world, selling Ubik. (Lastchaos Gold available at every home-art center)