My wife works at the library, and occasionally people will donate books that are too old or in such bad shape that the library gives them away rather than shelving them. Look what I got: 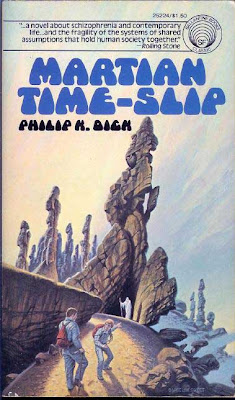 Oooh, that's the 1976 Ballantine edition! Way cooler, but not as valuable probably as the 1964 first edition. So that was cool, but the best was yet to come: 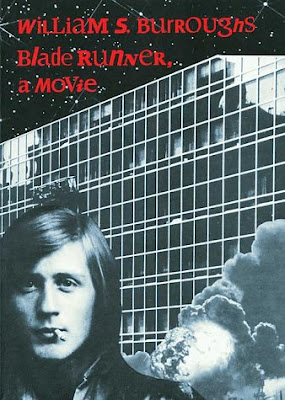 Yep, that's the screenplay for Burrough's film Blade Runner, the source for the title of Scott's adaptation of Do Androids Dream of Electric Sheep?. I thought it was worth a lot of money... it isn't.

But here's part of the first paragraph which explains everything and nothing:

"Now B.J. you are asking me to tell you in one sentence what this film is about? I'm telling you it is too big for one sentence - even a life sentence. For starters it's about the National Health Insurance we don't got. It's about plain middle-class, middle-income-bracket Joe, the $15,000-a-year-boy, sweating out the two jobs, I.R.S. wringing the moonlight dollars out of him to keep the niggers and the spics on welfare and medicare so they can keep up the strength to mug his grandmother"...

hey! that's the copy of Martian Time Slip that I have. I picked it up in a Flea Market in Pearl, MS for .50

http://en.wikipedia.org/wiki/The_Bladerunner. The Wikipedia entry for the novel states "Ridley Scott bought any rights to the title "Blade Runner" that might have arisen from either the Nourse novel or the Burroughs story treatment."

It's nice to be reminded of the Nourse novel which I haven't read in decades. I"ll see if I can find my copy. It should be pleasing to read something where illegal suppliers of medicine and medical services are portrayed as heroes instead of villians and political medical decisions & those who make them aren't treated as things to be fanatically worshipped or trusted.

I hadn't heard of Nourse before.

I see from the FREE SPECULATIVE FICTION ONLINE website that many of his stories, including at least one novel, are available as free etexts online (unfortunately not BLADE RUNNER though).

If anyone's interested you can find links to them here:

Interactive Essay: Pop Sixties the guy smoking the cigarette is in front of the hand-painted "LOVE" sign and here appears on the book cover with a modern "steel and glass" building and an explosion? It appears to have been cut out from it.

Interestingly, the medical profession has credited Phil for developing a new and useful theory of autism in Martian Time-Slip.