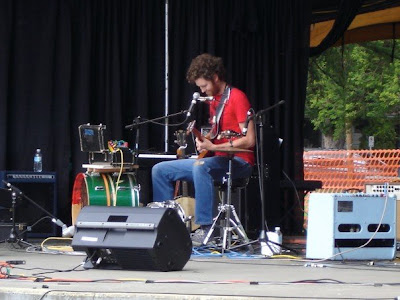 Interesting tidbit in this article on Chad VanGaalen (pictured above) from See Magazine (which apparently is a website). I've never heard of either, but apparently they both exist, and Chad's got an interesting project in the works:

"VanGaalen’s next big project is a full-length animation “loosely based” on The Owl in Daylight, an unfinished novel by science fiction icon Philip K. Dick. It’s a full-time commitment, and VanGaalen has to submit a finished product to the Canada Council, which is helping fund it, by early 2009 for final approval. That is, he says, assuming his funding isn’t cut off, as happened to his friends Holy Fuck in the wake of Prime Minister Harper’s drive against publicly funded lewd content."

That simply fails to compute on so many levels....
Why is an emo-singer working on an animated feature? Is he doing the music? The art?
Plus, there's already an Owl in Daylight in the works....
What's going on here?
And now that you mention it, where's my publicly funded lewd content?

"But Dick is about as mainstream a genre writer as there is — so what is there to worry about in VanGaalen’s interpretation?

Well that really raised more questions than it answered didn't it?

A bit of additional research here has revealed that VanGaalen is an animator.

My guess is somebody'll be receiving a letter from some lawyers.

Be on the lookout for "The Fowl in Late Night" sometime in 2010. Note to VanGaalen: might I suggest you try to get the guy that played Dumbledore to do the voices, or the butler from Arthur, if he's still alive.

Adding the Bookhabit widget to your website can increase revenue and the functionality of your site for your viewers. Your site is well suited to promote our books by Tessa B Dick, the former wife of Phillip K Dick. She has rewritten the last novel (but never published) by Phillip K Dick – The Owl.

I look forward to your feedback and questions.

Van Gaalen has made some neat animations in the past, but I'm not sure he'll handle the material in ways hardcore Dick fans will appreciate. I think it will be so loose an interpretation that it'll lead many of us to ask 'why use the title at all?'