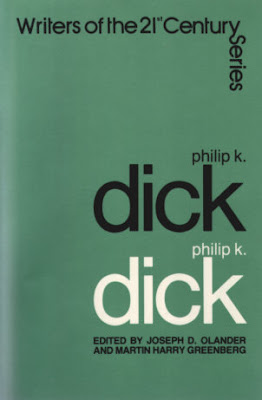 You know when you have an idea in your head and everywhere you look you see more connections to the idea, more proof of its validity? Well I just cracked my copy of the PKD volume from The Writers of the Twentieth Century and it fell open to this section in Patricia S Warrick's essay "Taoism and Fascisim in 'High Castle'":

"The problem lies in the German mind with the ideal and the abstract, and its divorce from reality of the social world around it. Rudolph Wegener, himself a German though masquerading as the Swede Baynes, provides the deepest insight into their destructive urge (Warrick then quotes from page three of MITHC):

'Their view; it is cosmic[...]the abstract is real, the actual is invisible to them[...]They see through the here, the now, into the vast black deep beyond, the unchanging. And that is fatal to life. Because eventually there will be no life; there was once only dust particles in space [shades of Leo Bulero's interoffice memo], hot hydrogen gases, nothing more, and it will come again. This is an interval, ein Augenblick. The cosmic process is hurrying on, crushing life back to granite and methane; the wheel turns for all life.... They [the Germans] want to be the agents, not the victims, of history. They identify with God's power and they believe they are godlike. That is their basic madness"

Warrick quotes more but this is sufficient for my point. Kim Stanley Robinson, in his doctoral dissertation on PKD found one consistent theme in Dick's work: entropy. But I see it differently. I guess it's a question of perspective. If you're looking at a horizon that seems to be receding away from you there are two possible causes. The first is that the world is retreating, backing away from you in an entropic lurch back towards primordial chaos. The second, far more troubling possibility is that you are, ever so slowly, retreating away from the horizon. The devivification of reality that takes place in Dick's books often appears to be a breakdown of objective reality, but my idea (the one I am finding evidence of everywhere including this passage from Warrick and PKD) is that these realities are being subsumed by a kind of paranoiac narcissism routinely displayed in Dick's characters. Think about how Dick's sentiments from above about the ultimate madness arising from an overestimation of our station in life apply to Ragle Gumm in Time Out of Joint, or Jason Taverner in Flow My Tears, The Policeman Said.

Dick's moral vision becomes much more apparent when we see reality, not as prone to serpentine windings upon itself, not as falling apart in terms of time or space, but as the object of subjective perception. Man's own inability to gain perspective is, I believe, the ultimate culprit in many of Dick's most fractured realities. The heroes in PKD's fiction are those that move from apprehending the world and their place in it intellectually to emotionally connecting to the people in the world around them, all of whom are just as lost, just as confused by the glare of their own searchlights as the rest of us.

In other words, it's not universal entropy we find in PKD's books, it's a series of rapid retreats from what appears to be a malevolent, or at least indifferent, reality, and when these characters flee that reality, they often leave the only thing that could save them, a set of emotional connections to the people around them (PKD called this essential emotional connection to others caritas), which only makes things worse, makes the universe seem even more cunning in its ruthless indifference. The persistent message in all of PKD's irv is that we must engage, that we must try anyway, and that the only way we're going to get anywhere, more specifcally, the only way we're going to feel anything real, is through what TS Eliot called "the daring moment of surrender", that is to say caring for others and thereby allowing ourselves to be vulnerable.

One of the most common things people that knew PKD tell me is that he would often, quite visably, retreat into himself, becoming quiet and standoffish. I feel like there was a part of him that was always running from reality, it terrified him so. We know he had a lot of fears, fears that left him isolated to varying degrees throughout his life. But I feel he grew to overcome almost all of his fears (a little fear's healthy) by the time he died. If you read his interviews with Rickman he had gained a real perspective on his life, and I've just really come to admire the way he fought his fears and continued to engage with the world, even when it could only be in his books. Aren't we're lucky he chose to escape by sitting in front of the typewriter for much of his life?
Posted by Ragle Gumm at 9:53 PM

I suspect that these critics suffer from a common mistake about Phil's ancestry: Phil was not German; he was Scottish.
~~~

Great post! It certainly gives us a lot to think about. I'm curious about the two possibilities you mentioned: the horizon receding from the subject vs. the subject receding from the horizon. If I understand you, the first is the world unraveling around us; the second is us unraveling the world due to our subjective reaction to it. If that's right, then I believe that is an important insight into Dick's work -- as long as it's our subjective reaction *to the world*. In other words, it doesn't seem like a character defect or a psychological imbalance in his characters that causes the subjective reaction. Instead, it is some aspect of the world that causes subjects to unravel it.

I'm thinking of someone like Jack Bohlen in "Martian Time-Slip," who emigrates from Earth to Mars because he was stuck in a dead-end job that effectively dehumanized (or androidized) him. His psychotic episode, in which he imagines his boss as an android, is a result -- not of his own fears -- but of a material situation. And, importantly, there is nothing inherently narcissistic about it. Even Ragle Gumm in "Time Out of Joint" could be said to be caught in a material situation in which a dialectic of power and submission is played out in terms of an imperialistic military struggle.

These characters might be said to flee reality not as simply a paranoid reaction, but rather an extreme psychological reaction to a paranoia-inducing social structure.

I was recently leafing through "Now Wait for Last Year" and reminded myself that there are several places in Dick where people attempt to build miniature worlds. In "Now Wait," the examples are Pitts-39 and Wash-35 (or something like that). Then, more famously, there's the Perky Pat Layouts. These examples could be a narcissistic fantasy in which one controls a smaller world, becoming sort of a god to those worlds. But more importantly, it seems to dramatize the need to feel secure in a constructed world rather than dehumanized in a world that crushes you.