Third Library of America Volume to Include..... 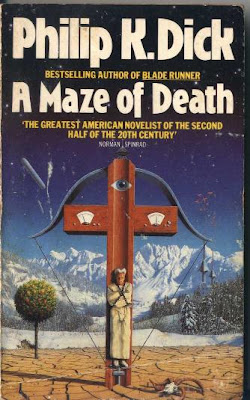 I've been getting a lot of email regarding the third PKD volume from the Library of America. I went to the source and asked the volume's editor Jonathan Lethem. He responded this morning. Drum roll please.... Volume Three, titled VALIS and Later Novels, due out July 30, 2009, will include:

The inclusion of A Maze of Death in this edition is perhaps Lethem's most controversial choice yet. Dick's irv is tailor-made for long-winded discussions over Cheetos and Mountain Dews about which books should be included in these kind of faux-canon-making endevors, but it is interesting to note that Lethem chose A Maze of Death over Radio Free-Albemuth. I like this selection as it compiles, in one edition, much of Dick's later, more overtly religious/cosmological work.

This has all got me thinking. I mean the Library of America is supposedly dedicated to 'preserving America's best and most significant writing,' but from my vantage point, there would be no volume three if the first two volumes had been duds. Perhaps the most Dickian assembly of this edition would include excerpts from the Exegesis, which would undoubtedly sell well (especially if it included previously unavailable entries), but would sort of undercut the LoA's reputation. Very few people have read the Exegesis in its entirety - perhas Sutin is the only one - so, by virtue of its obscurity, it cannot really be America's most significant writing.

In the world with that edition, Dick has managed to expose the LoA's hypocrisy and vault even his most far-flung theories onto the literati's bookshelves. His pulpish search for meaning has been upgraded, evolved onto onion skin paper - the literary establishment's seal of approval. To legitimize his own search for meaning, while de-legitimizing the medium of distribution, wow, that's pretty Dickian.
Posted by Ragle Gumm at 11:19 PM

Too bad they couldn't pitch in Confessions of a Crap Artist, being that it was published in the 70's. I'm really developing an appreciation for his 'realist' novels and it seems to me you can't really grasp PKD's overall aesthetic project without getting hip to the "square" Dick.

Imagine - what if he'd managed to publish some of that stuff, to acclaim, in the early sixties. Validation for his mainstream efforts would have totally changed his life course.

Maze of Death is my 2nd favorite PKD novel, after The Penultimate Truth. However, I don't really see how you can call it one of his "later" novels. I think they should have included Albemuth for a Volume IV and instead had a mid-period Volume III with Maze, Penultimate Truth and a couple of others; maybe Galactic Pot-Healer (although I know it has a bad rep in some circles). I've said all this here before, anyway, my two cents.

If the aim is to increase Dick's appeal and broaden his audience, stay away from Exegesis excerpts. There may be occasional moments of brilliant insight amongst those millions of words, but these were private notes by PKD, never intended for publication. The Exegesis is not an undiscovered goldmine of almost completed novels or short stories. It was PKD trying to sort out in his own mind what, if anything, his vast output of short stories and novels actually meant, and if his writing was guided by forces other than those so active in his imagination.

PKD's raw thoughts from the Exegesis, while interesting to the adickted, will make most new readers put the books straight back on the shelf again.

Pete - If PKD had become a literary star in the mid-to-late 1950s, it's debatable he would have ever set about writing all the science fiction and fantasy we love so much. Then again, the 'realist' fiction he wrote between 1953 and 1961 make for a damned impressive literary legacy on its own.

I keep coming back to Maze Of Death as well. Absolutely haunting, with moments of great beauty, and beautiful sadness.

I recall A MAZE OF DEATH as being one of Dick's really good novels, and it should be rediscovered, but I cannot see any logic to not including RADIO FREE ALBEMUTH in this edition. I'm sure there's even room to include it along with MAZE. Is it possible that the rights were not available?

(Personally, although I see VALIS as a brave leap for Dick, and I enjoy and respect it, I prefer ALBEMUTH. Personal preference notwithstanding, if any book demands to be published alongside VALIS it is its doppleganger, ALBEMUTH. It makes sense chronologically, thematically, and, insofar as the two books demonstrate how Dick could shape the same material to different effect, artistically.)

I agree it would make sense artistically to include RFA instead of Maze of Death. But seen as this is meant to be the most essential of Dick's works it wouldn't make sense to include two novels (in Valis and RFA) that are so similar, plot-wise. I have book containing the Valis trilogy already (w/ exegesis entries included too) so this is quite a redundant collection in my eyes.

Do you think this will be the last LoA Dick collection, or will they carry on? I hope they do, as they might have a collection that might actually be worth me buying.

This is great news. Hopefully Dick's entire body of work will be released in this way, all the novels and short stories.

I enjoyed "Maze of Death," but it seems to me that "Radio-Free Albemuth" would've made a better thematic selection. I didn't find that it was too similar to "VALIS" to set them next to each other. But hey, why not five novels (like the last LoA volume)?

At any rate, this is the first I've heard that there will be a third volume, so I'm very excited!

Now that that has sunk in...it would be neat to put together some earlier novels, too. How about a fourth volume? I agree with Pete that "Confessions of a Crap Artist" is a terrific novel and deserves to be more widely known -- but since it was written in the 1950s, it could be put in a collection with "Time Out of Joint" and a number of Dick's more successful short stories from the 50s. While some of Dick's stories were duds, there are several that stand up well and should be preserved as exemplars of the form.

I second the motion. A 1,000 page final LOA volume with Time out of Joint, Confessions of a Crap Artist, maybe Eye in the Sky or Solar Lottary (or another of the better realist novels), and MOST importantly, a generous portion of the better of the short stories.

I should add, the reason I give a hoot about the LOA volumes is just because I've got a bunch of PKD books left to read, and its kinda nice to read then in those volumes - you can pick them up from Amazon for like $25-30 bucks, they're swanky to look at and hold, and four or five PKD novels in one package is a good thing, inherently.

Well, personally I'd prefer a single- or double-volume collection of all the short stories, because there is no easily accessible way to own the complete stories in hardcover, as far as I can see.

What's wrong with The Collected Stories (the collection with Beyond Lies the Wub as the first book, then Second Variety...). They're not hardcover, but that's no big deal to me...

As a collector, I'd prefer hardcover, so I'm hoping this 3rd volume is a success, and we'll see other Dick volumes from LOA. They could do a couple of volumes with 50s novels. More 60s novels. I wonder how many such volumes would be needed for a complete works set?

Underwood-Miller, an independent publisher, put out a limited edition, five volume hard cover set of Dick's complete short stories back in the 80s. It came in a slipcover and sold for $100.00. Some complained about the price, but $20.00 per volume for such an edition seemed cheap to me even at the time...which is why I bought it.

Hey, for the cover pic, I vote for that sweet, open shirt, hairy-ass pot belly pic from the Vertex magazine interview that the Total Dickhead posted about back in June of last year. PKD is looking like a powerful, powerful beast of a man in those shots.

As a long-time subscriber to LOA and a Philip K. Dick fan, I hope this third volume does not lead to very many more. Since they only print 8 or so a year, I would rather see them expand science fiction offerings more broadly. Not to mention they still are neglecting some crucial 18th and 19th century texts. A complete set? Not likely. I think they only did that for James or authors whose complete works fit in one volume (Flannery O'Connor, Kate Chopin). In any case, it would not be in the spirit of the collection. Dick should be on a shelf next to Jack London and Mark Twain. I am not so sure "Vulcan's Hammer" should be on that same shelf.

The suggestion of a volume of his short stories is good.

Putting in another vote for Albemuth, my favorite of the Valis novels. Click on my name - I've got an interview up at my site with Tessa Dick about her version of The Owl in Daylight.

"By virtue of its obscurity, it cannot really be America's most significant writing."

I can't agree. Using that rationale, Dick's books wouldn't be published by Library of America at all because of his relative obscurity in comparison to most of the other writers in their series. The Exegesis selections I've read in "In Pursuit of Valis" shed profound light on the very books that are compiled in Vol. 3; and for that reason, it's unthinkable that Lethem didn't include some representative selections.

Doesn't VALIS contain some of the relevant Exegesis entries in an appendix already? The paperback Vintage edition (the only version I own) does, at least.

Although I love most of Dick's novels, I have to say I can't really fathom the choice of the VALIS "trilogy" for the third volume. A selection of his best short stories would have had a wider appeal.