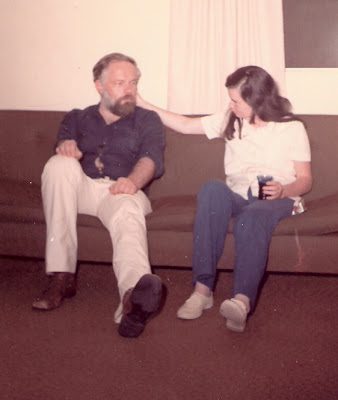 There's yet another good interview with PKD's fifth wife Tessa over at Self-Publishing Review, and while it's not chock full of new information, it sheds some additional light on their marriage, 2-3-74, and her self-published version of The Owl in Daylight (which differs markedly from the version PKD's estate is currently crafting into a bio-pic).

Tessa has written a lot recently about her life with PKD (remember she was a published writer before she met PKD). First she produced The Dim Recollection of Philip K Dick, a short, self-published memoir of her time with PKD, available at Amazon.com. Then she turned her efforts to writing PKD's final, unfinished novel The Owl in Daylight. As most of his fans know, PKD talked incessantly to his friends and family about his novels before sitting down to write them, and Tessa uses her memory to construct the story from Dick's riffing.

In this interview Tessa talks a bit more about what it was like living with PKD during his 'mystical experiences' in 1974:

"Phil constantly discussed his visionary experience and his multiple interpretations of it. On the other hand, he was closely involved in raising our young son and handling all the little cares of daily life. It was as if he were two or three different people. He especially enjoyed having people come over to visit, whether they were fans of his or just friends who didn’t read his books."

For all the people who (naturally) assume that experiences like this are completely overwhelming (as Dick makes them sound in VALIS and the Exegesis), it's interesting to note that Dick continued to dwell in the day to day world of childcare and writing.

Tessa also discusses in detail some of the varying plotlines PKD laid out for Owl over the years:

"Phil had written very little about this novel. In fact, all that has been found is a letter that he wrote to his editor and his agent (same letter, two copies). It was very sketchy and did not even name any characters. It did mention Dante’s Inferno and the Faust legend.

I did not use Phil’s ideas as he expressed them in that letter to his editor and his agent. He was going to have a great scientist design and build a computer system and then get trapped in its virtual reality. The computer would be so advanced that it developed human-like intelligence and rebelled against its frivolous purpose of managing a theme park. In the conversations that we had shortly before Phil’s death, I couldn’t convince him that a computer system would have to be designed and built by a team of experts in different fields, such as one expert in graphics, another in animation, one for hardware, one for software and so forth.

I have read that Doris Sauter published an alternate plot involving a musician and aliens, but I did not read her book and did not use her ideas. Someone told me that the name she had for the main character was similar to the name that I gave him, but that is mere coincidence. I named him Arthur, Art for short, because he is an artist. I made his last name Grimley because he is in a grim situation.

The Owl in Daylight is my concept of what Phil’s novel should be. I relied heavily on Mozart’s opera The Magic Flute. The plot is loosely based on Phil’s life, which will become more apparent in the sequel, The Owl in Twilight."

The interview also has some rare pics (including the one of Tessa and PKD used above - which I had never seen before).

Check out the interview in its entirety here.

Then head over to Amazon.com and pick up her books.

thanx again for plugging my novel!

BTW, it made the Times:

A book for Blagojevich? And other book news
Los Angeles Times - CA,USA
Speaking of bringing stories to life, Philip K. Dick's last wife, Tessa, talks to the Self Publishing Review about her new book, "The Owl in Daylight," a ...

That's excellent, hadn't seen that listing. Thanks, TDH, for linking to the interview.

Not certain about the ethics of publishing posthumous work, especially something that existed in pretty sketchy form, like THE OWL IN DAYLIGHT. There's an exploitative aspect to tampering with a dead author's legacy and one immediately wonders about the motivations of the individuals involved: to further an author's legacy or to cash in on it.
Is Ms. Tessa Dick an accomplished author, someone qualified to complete a work begun by a well-regarded talent? I am dubious and I hope this site won't blindly endorse her efforts or commend her when even the faintest praise is not deserved...

Sorry, could you correct my name, I muffed it while typing. I have an atrocious head cold.

That should read "Cliff Burns".

Cliff/Cloff, you raise some legitimate questions, so let me set your mind at ease.
I participated closely in Phil's writing, esp. the VALIS trilogy. In addition, I was a published writer before I ever met him.
I taught writing classes at Chapman University for 12 years, and I have been publishing my own novels and stories for some time.
I wrote the Owl at the urging of a number of Phil's readers. Otherwise, I might never have taken on this project. Although I have been researching the background material for 25 years, I wouldn't presume to write the Owl, except at the urging of Phil's readers.
If you want a sneak peek at the first chapter of the Owl, you can download it for free at Book Habit.

We really want to do a show on PKD, we were considering Erik Davis, is that a good choice would you say?

I've been a fan of Phil's work for many years, I think I have just about everything he wrote, EXCEPT the posthumous stuff, which doesn't, I think, enhance the man's literary reputation. I'm also a professional author and the notion of someone taking over my work after my demise fills me with great foreboding...and revulsion. To the extent that if I ever do get that dreaded news, a lump where there shouldn't be one, I shall cull my unfinished efforts to make sure no one can exploit them after I'm gone.

I'm sure your motivations are well-intentioned but I think you should confine yourself to your own work and forge a literary reputation and legacy based on stories and themes unique to YOU.

And as for Phil's work, I hope you will continue to lobby and labor on behalf of keeping as many of his books as possible in print so that future generations of readers can be exposed to some mind-bending prose that really does push the boundaries of speculative fiction and has offered up some genuine, unqualified classics.

Thanks for your response and best of luck with your writing...

I'm sure PK Dick's literary legacy can survive a family member performing a literary experiment. The man did nothing but experiment himself. And Albemuth is great. But I'm going to review your book anyway.

A question for Tessa:

On the first page of THE DIM REFLECTION OF PHILIP K. DICK, you write, "Imagine my shock and dismay to learn that a young woman had written a book in which she claimed to have a telephone relationship with my husband, at a time when we did not even have a telephone!" Who are you talking about? And what book might that be? If it's available and I don't already have it, I'd like to seek it out. Thanks!

sorry, Joe Chip, but my attorney has advised me not to identify that book or its author -- and it is not available
~~ Tessa
~~~

You're sure a tease, Tessa! I suspect it might be Anne Mini's "Family Darkly: Love, Loss, And the Final Passions of Philip K. Dick," but of course I don't expect you to say one way or the other. However, it *is* listed at Amazon as "out of print - limited availability" and I have it on my wish list in case one ever turned up. Not likely, though, since when I spoke to people at Carroll & Graf (actually Publishers Group West) they claimed it was never released for "legal reasons."

rest assured, Joe Chip, that no matter who the author or title was, it was not my doing that made it unavailable -- censorship is not my thing
~~~

Yes, Tessa, I knew that....but it is disingenuous of you to mention it in your book without being willing to own up to the facts behind the assertion.

I've read a couple of her books, and I think she's a pretty good writer. Certainly I never got the feeling that she was trying to exploit PKD's legacy. Her style and her ideas are markedly different than Phil, and there's no attempt to ape his 'voice' or what have you.

That's like saying Max Brooks is somehow 'exploiting' his father by writing World War Z, or John Ritter should never have been an actor because his dad was one, or that Douglas MacArthur should never have won a congressional medal of honor because his father was a war hero before he was born. It's not logical to bar a creative person from having a career simply because a relative was also creative and famous.

The bottom line on art is that The Thing Speaks For Itself. If it is a good book/painting/song/dance/whatever then it succeeds on its own merits, and the lineage and provenance of the creator of the work is incidental. Judge the artist based on their art, not the other way 'round.

(For the record, I've read Quachi and Thor's Hammer. I've not read "Owl" yet, though it's on my list, and very great thanks to this site for letting me know "Owl" even existed! Hats off to TDH!)