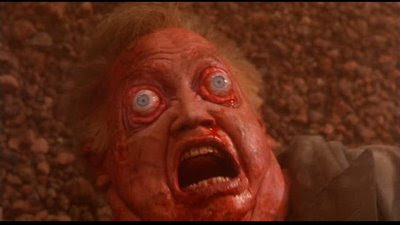 ComingSoon.net (whose logo's font was clearly borrowed from Blade Runner), is reporting that Neal Moritz (whose production credits include I Am Legend) is in final talks to remake Total Recall. This isn't the first time this rumor has surfaced, but I think a quick sampling of the comments over at ComingSoon.net speaks for most of us:

My favorite part of the article was that the people behind the remake is a company called Original Films.

This movie will be nothing without Arnie. Everytime I watch the DVD (which is every few months since it is one of my favorite movies ever) I get chills down my spine at the opening credits. Everything is perfect in that movie. This remake will just take the plot line but put Jason Stateham in instead. I can't see that bald prick pulling off lines like "See you at the party Richter!" or "Consider this a divorce." **** **** **** this is stupid.

Can't stand that Neal Moritz. What's he gonna do? Cast Vin Diesel as the main protagonist with that hack Rob Cohen as director???

Enough with the goddamn remakes please!!!!

I can't wait to see the chick with three boobs.

I copied this from another board, simply because I feel it's accurate:

It's NOT gonna be a remake of TOTAL RECALL.

It's going to be an adaption of ****'s "I Can Remember It For You Wholesale". Huge difference.

It's like how The Last Man on Earth and Omega Man are both adaptions of "I am Legend".

Most people have never read "I Can Remember It For You Wholesale", much less even heard of it. So it's easier to say it's a Total Recall remake.
Posted by Ragle Gumm at 8:12 PM

I agree, the original was "Total Crap". I remember going to see it the first time in the theatre and they had spelled PKD's name wrong in the credits! Hopefully the remake will be better :-)

I can only think that remakes of films like Total Recall are purely to try and lure fans of the original to go and see the film.'

This is getting a bit silly, now.

I think total recall was quite ok, they did enough things to make u think that it was all in his head especially the flash of light at the end as he had (possibly)a lobotomy.

Why not make a martian time slip movie, I'd see that

It would be great to see David Cronenberg take the helm again and make the film of TOTAL RECALL that he worked on for a year before he parted ways with DeLaurentis.

But, Cronenberg made his own Philip K. Dick movie anyway, EXISTENZ. (VIDEODROME was also very Dickian, but I think the later film is a more realized Dickian vision. Love the "Perky Pat's" fast food sandwich bags in one scene!

I liked the original TOTAL RECALL, actually, and despite it being as far removed in tone from Philip K. Dick's writing as can be imagined, it also managed to slip in some cool Dickian moments, such as the scene on Mars where the proprieter of Recall, Inc. comes to Arnold's room to tell him he's had a psychotic break and is still on earth. And, I'll always be convinced the whole thing was merely in his head, as the ending with the blue sky on Mars realized the fantasy he described on earth before going into the hyno-dream.

Dude, everytime I check your blog now I see that horrific red eyepop face and it's freakin me out!

Surprisingly, I think Total Recall is one of the best PKD stories made into a movie. Like Robert said, the movie really leaves you questioning what is real, and gives you that same disorienting feeling that arises in a good PKD tale.

Yeah, I have to admit that Total Recall did it for me, too, when I first saw it in the cinema. I was a science fiction addicted teenager, which probably helped.

Far more interesting than what we think of PKD movies is what the man himself would have thought.

Can you imagine his delight if he was alive and had Disney buying King Of The Elves?

I think the fact that TR was a big success and had a major star would have made PKD very, very happy indeed. As would have Minority Report, which seems a much better movie today than when it was first released.

I'm sure he would have been extremely pleased with Richard Linklater's take on A Scanner Darkly as well.

I've always wondered if, had he lived, he would have been seduced by Hollywood and turned to writing screenplays instead of novels. He was delighted that he had been able to knock out his screenplay of UBIK in a couple of days (and nights), and even now (if there are any producers reading this), Dick's UBIK screenplay is a real treasure, though it would obviously need some serious pruning to get it under three hours. A few friends and I read it loud once and it came out at near six hours. Then again, it would make an excellent HBO three nighter.

I also firmly believe that Electric Sheep would make an excellent four to six part TV series. So many fantastic ideas that went unused in BladeRunner, and so many that are becoming our reality today.

I have to echo this one loud and clear: Yeah, an "Electric Sheep" TV mini-series would kick ass.

I agree, too! Deckard's wife? Mercerism? The "Sidney's Animal & Fowl Catalogue" that Deckard carries in his pocket? All of these are elements that give "Do Androids Dream of Electric Sheep" its great depth and variety. Deckard's character seems so much more complex and compelling when these things are included. Can't we circulate a petition or something? :)

I know I'm going to sound like a miserable old luddite here but does everything have to be televised / filmed? Can't a book just stay a book?

Palmer, that's very pre-postmodernist of you. :)

Palmer E - it will be much easier to turn Mercerism into the new Scientology, as Philip would have wanted, if there's a successful TV show to promote it.....