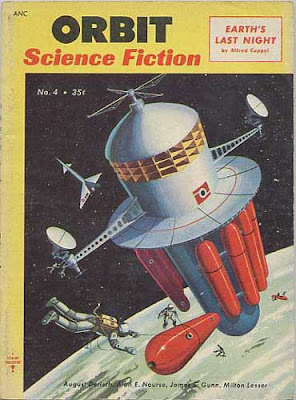 Big news, an adaptation of PKD's 1954 short story "Adjustment Team" is currently being shopped around Hollywood. According to an article in Tuesday's Variety magazine, George Nolfi (whose writing credits include Ocean's Twelve, and next year's, Hawaii Five-O) has apparently written a script 'loosely based' (uh-oh) around Dick's story of "Ed Fletcher, a real estates salesman, [who] finds out that our world is really, in effect, one big soundstage controlled by strange and mysterious guardians." I would have a bit more confidence if this writer had cut his teeth on something a bit more substantative, like Charlie's Angels II, but, well, it's Hollywood. Variety is reporting that Nolfi will make his directorial debut with Adjustment Team... No red flags here.

According to Variety, despite the large pricetag attached to Adjustment Team, the project will probably have a studio home 'before the end of the week.'

Nymag.com labels the film 'a sci-fi romance' and the headline declares "Matt Damon to Possibly Fall in Love With Robot." .... ZOMG, start lining up those dates fellas!

Let's imagine the tagline, shall we ?

'From the man who wrote Blade Runner'

I found the synopsis on Wiki which tells of the Sector T137 and the "changes" or adjustments as the title states.
I've read a dozen or so of Dicks' books and would recommend his writings to anybody who is fed up with the garbage that the mainstream media pushes as entertainment, Dick quite simply expands the imagination with his characters, his pre-NLP intuition inspires me whenever I get downhearted about political events, keeping me and probably hundreds of thousands who have read his work.
Dick is one person who truly changed my world for the better.

Keep up your blog Total.

Pretty cool place you've got here. Thanks for it. I like such themes and anything connected to them. I would like to read more soon.