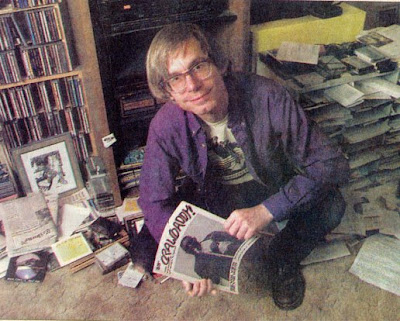 Jonathan Lethem emailed me recently to let me know that he and the family of Paul Williams have set up a great website and support fund for Paul. Paul suffered a rather serious bike accident in 1995 that resulted in a serious brain injury . According to the website, Paul has developed early-onset dementia and now needs full-time care.

If you don't know who Paul Williams is (no, not the 'Rainbow Connection' musician), you're probably only reading this website after Googling the word 'Dick' for one reason or another, as Paul basically introduced PKD to the world at large with his Rolling Stone article and interview that focused on the break-in at PKD's Santa Venetia apartment. Paul Williams got John Lennon to read The Three Stigmata of Palmer Eldritch. Paul Williams got Confessions of a Crap Artist published. Paul Williams started and maintained the Philip K Dick Society Newsletters, which is where I learned about half the stuff I know about PKD, stuff you can't read anywhere else.

Be sure to check out the Writings section at PaulWilliams.com, to get a sense for how wide his interests and expertise ranged. As Lethem wrote in his email, "He stands as a signal figure in the history of "fan writing", too -- at that crossroads where blogging was a twinkle in a mimeograph eye." Not only that, Paul rode to Woodstock in the Grateful Dead's limo.

I use a couple sections from Paul's book The 20th Century's Greatest Hits: A Top 40 List in my freshman composition class. It's brilliantly written, very conversational, yet at the same time, deep, wide-ranging, touching, and passionate. If you're dying to discover the real artistic jewels of the last century, it's a great read.

I know these are tough times for many of us economically, but I'm asking you to donate. I've donated $20 - I wish I could give more, but I'm a teacher in California....
Posted by Ragle Gumm at 12:40 PM

Poscreds on their way from the UK.

I actually sent a few people one of Paul's RS articles a few days ago. I discovered his review of the Kinks' Village Green Preservation Society. It's a joy to read, admittedly less of a review, and more unreserved praise of the Kinks, but that works for me!
Here's the link: http://www.rollingstone.com/artists/thekinks/albums/album/90937/review/6067569/village_green_preservation_society

so sorry to hear it
-- I hope that people will help out
-- kind of strapped, myself, right now
~~~

Ah, that's just terrible. I had no idea.

Paul Williams is a pillar in the PKD community. He'll be in my thoughts.

Wish I could help, but I need help, myself. I can't pay my property taxes. Not this year, not last year.